One in five adults in the U.S. experiences some form of mental illness each year. About 4.5% of American adults are estimated to have a serious mental illness such as schizophrenia, severe depression or bipolar disorder or personality disorders.

Biochemical research is useful for understanding how mental illnesses affect the brain and contributes to the discovery of new and optimization of existing treatments. Below, science writer Laurel Oldach summarizes recent studies published in ASBMB journals. 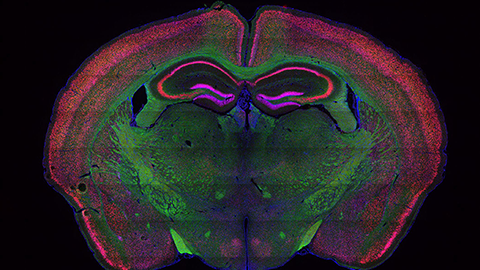 But scientists don’t just study mental illness. They can experience it, too. In fact,  approximately one-third of scientists are thought to experience depression or anxiety during their graduate study. Below also are poignant personal essays published ASBMB Today that explore scientists’ experiences and their efforts to put an end to the stigma around mental illness.

Sleep is a serious matter

Some major neuropsychiatric disorders, notably depression, are linked to sleep problems. In  this paper in the Journal of Biological Chemistry, while investigating how a gene linked to depression tanks dopamine levels, researchers at Soochow University in China found that removing that gene in mice causes problems with the circadian production of a dopamine synthesis protein. The work suggests one link between mood and circadian clock.

One of the challenges of studying serious mental illnesses is that most don’t have one known genetic cause. In  this paper in JBC, researchers removed one gene related to myelination from one type of cell in the mouse brain and found that their behavior and brain chemistry changed to resemble people with schizophrenia. They found a similar mutation in a group of people with schizophrenia, strengthening the evidence that problems with myelin may be linked to the disease.

What stress can do to a brain

Why is stress so bad for your mental health? Many researchers around the world investigate how chronic, mild stress affects the brains of rats and mice in order to better understand what stress does to people.

Chronic pain after trauma may depend on your stress gene

No, it’s not all in your head. A research group has discovered that which genetic variant of the FKBP5 gene a person carries is predictive of how much post-traumatic chronic pain that individual will experience. Read more.

How do genetic variations contribute to ADHD, autism, bipolar disorder and other mental illnesses?

This article on the dopamine transporter investigates how rare genetic variants that doctors have observed in people with various mental illnesses affect the protein’s biochemical function.

New medicines would never come to exist without years of experimentation, trial and error by scientists around the world, inspired by the kind of basic research into the brain described above. Here’s a window into the world of translational research for mental health.

New ways to treat depression: Major depression is one of the most common mental illnesses, and  about 17 million adults in the United States have experienced at least one major depressive episode. Fortunately, depression is highly treatable with a variety of antidepressant drugs that act by many different mechanisms. The newest class of antidepressant, which the FDA approved this year to treat post-partum depression, has a new and unique mechanism. Rather than blocking the effects of stress hormones or raising the levels of the neurotransmitters serotonin or dopamine, which make neurons fire, this type of treatment turns down brainwide levels of an inhibitory neurotransmitter called GABA. Here’s a  recent paper reporting the effects of the new drug on GABA receptors. GABA was initially discovered in 1950 and reported in JBC. Read  the original article or  this JBC Classic about it. Since then we’ve seen many more papers on GABA and its receptors.

You are what you eat: depression edition: As strange as it sounds, chemicals found in food can be beneficial for those with depression. At high doses, dosapentanoic acid, or DHA, a polyunsaturated fatty acid found in fish and fish oil, seems to help. However, most dietary DHA is blocked from absorption into the brain by the blood–brain barrier, so to enjoy any benefit, people would need to take huge doses. Scientists in Chicago discovered that, in mice, a slight chemical modification to DHA makes it reach the brain about a hundred times more effectively. The treated mice showed higher BDNF and serotonin receptor levels, meaning that this lipid formulation may have promise for depression.

What makes this antipsychotic drug different from all the others? Clozapine, the first antipsychotic drug, is considered the gold standard for treating schizophrenia because it suppresses symptoms so effectively. However, it also has some serious side effects, such as cardiovascular complications. Is it possible to design a drug that works as well as clozapine, but without those effects? In this study, researchers from the University of Rhode Island and other universities investigated how clozapine differs from other drugs that were designed to mimic it. While all of these molecules block dopamine signaling, most also boost dopamine receptors on the cell surface. Clozapine conspicuously bucks that trend, which may help account for the compound’s different clinical profile and inform future engineering efforts.

Being a trans scientist: From searching for a gender-neutral bathroom to educating colleagues about correct pronouns, TL Jordan, a predoctoral student at the Mayo Clinic, describes with heartbreaking honesty the impact that being a trailblazer for nonbinary people in science has on their mental health.

Mental illness should not disqualify me: Susanna Harris, a grad student in microbiology and founder of The PhDepression, weighs the perils and rewards of being open about one’s “emotional stability.”

With a little help from my friends: Mark Zbinden, a scientific project coordinator at a small biotech company in Boston, writes about how important friendship was for his mental health while in graduate school, which took him to the brink.