By the year 2050, the world’s population is expected to grow from 7.8 billion to an estimated 9 billion, and, according to the Food and Agricultural Organization of the United Nations, food production must increase by 70% to meet anticipated demand. Corn, or maize, uses sunlight effectively and can produce over 500 kernels from just one seed, making it a preferred crop to address growing hunger needs. However, approximately 10% of crop yield is lost to pathogens such as Ustilago maydis, a fungus that causes maize to grow large tumorlike structures. Understanding how plants defend against such diseases may help researchers develop fungus-resistant maize strains.

Kiwellin proteins are plant defense proteins that inhibit microbial effectors such as chorismate mutase Cmu1, but researchers have done few studies on how kiwellin proteins such as kiwellin 1 protein, or KWL1, and kiwellin protein homologs work together to coordinate their response against pathogens. In a recent paper published in the Journal of Biological Chemistry, Florian Altegoer of the Philipps University of Marburg and collaborators in Germany reported the structure of a maize KWL1 homolog, KWL1-b, in complex with Cmu1 and compared it with a previously reported Cmu1–KWL1 complex. They found that the structures of the complexes are similar, but KWL1-b is expressed at lower levels and shows a different pattern of tissue-specific expression. The authors also showed that KWL1-b, like KWL1, inhibits Cmu1 activity and is able to bind carbohydrates but shows different preferences for which carbohydrates it binds.

The authors’ data suggest that KWL1 and KWL1-b are part of a redundant, spatiotemporally coordinated defense system in plants and that minor structural divergences between two close homologs result in functional diversification, as seen by the differing carbohydrate-binding properties of the two KWL proteins. These findings could be important for developing fungus-resistant maize strains. 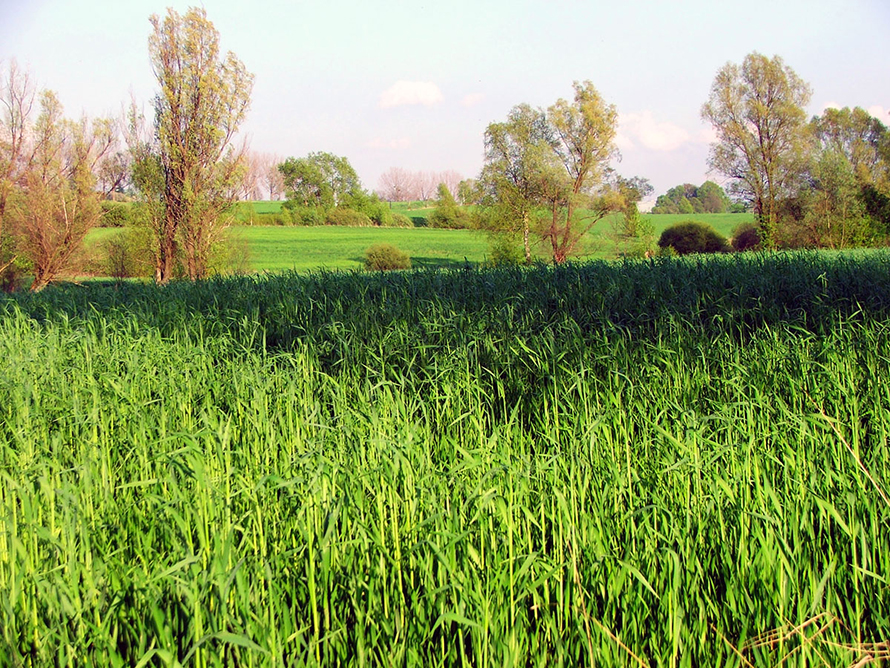 Sebastian Maćkiewicz
Researchers are studying a plant defense system that could help develop fungus-resistant strains of the food crop maize, shown here growing in a field in Poland.

Toggling to a third state to treat malaria

About 228 million cases of malaria and 405,000 malaria deaths occurred globally in 2018, according to the World Malaria Report 2019, and the parasite Plasmodium falciparumis responsible for more than three-quarters of malaria cases worldwide. The cGMP-dependent protein kinase G, or PfPKG, is essential for the parasite’s life cycle, and the use of allosteric kinase inhibitors such as cyclic GMP analogs to interrupt PfPKG activity represents a promising anti-malarial strategy. However, researchers know little about the mechanisms underlying PfPKG inhibition.

Jung Ah Byun of McMaster University and an international team used comparative nuclear magnetic resonance analyses of a key regulatory domain of PfPKG to demonstrate that the cGMP derivative 8-NBD-cGMP effectively antagonizes the enzyme. The authors showed that 8-NBD-cGMP accomplishes effective inhibition through an intermediate third state that is unlike the traditional active versus inactive two-state equilibrium.

The discovery of this third state, reported by the team in a recent paper in the Journal of Biological Chemistry, provides new insights into enzyme allostery and may be useful for therapeutic development for malaria.

Protein kinase B, also known as AKT1, plays a key role in cell survival and oncogenesis and is activated by the addition of a phosphate group to two amino acid sites, serine 473 and threonine 308. However, how the phosphorylation of one or both of these sites affects AKT1’s function is unknown.

In recent work published in the Journal of Biological Chemistry, Nileeka Balasuriya of the University of Western Ontario and an international team mapped AKT1’s preferred substrates when serine 473, threonine 308 or both regulatory sites are phosphorylated. Using programmable AKT1 variants and peptide libraries, the authors showed that each phospho-form of AKT1 has common and distinct substrate requirements.

These results demonstrate new modes of involvement of AKT1 in the regulation of cellular processes.

Alzheimer’s disease is characterized by brain cells that wither and die, resulting in loss of memory and other mental faculties. Excessive buildup of beta-amyloid is a hallmark of Alzheimer’s, and researchers believe it contributes to the disease’s pathology. The chaperone DnaJ heat shock protein family member B6, or DNAJB6, inhibits the formation of toxic beta-amyloid aggregates, but researchers don’t know much about the mechanism by which this intervention occurs.

In a paper published in the Journal of Biological Chemistry, Nicklas Österlund and colleagues at Stockholm and Lund universities used a mass spectrometry–based approach to assess directly beta-amyloid oligomers formed in solution. The authors found direct evidence that oligomeric, not monomeric, forms of beta-amyloid are captured by DNAJB6. Moreover, they showed that this ability is dependent upon particular amino acids capable of hydrogen bonding, specifically serine and threonine.

These findings provide new details that improve researchers’ understanding of beta-amyloid biology and may aid in the development of new Alzheimer’s disease therapies.

Myelin is a lipid-rich substance the wraps around axons to insulate them and improve electrical signaling. Scientists believe myelin protein P2 stabilizes myelin as it forms these insulating layers around peripheral nerves, but researchers have not identified the underpinning molecular mechanisms that allow apposing myelin layers to pack tightly together.

Using cryo-electron microscopy, X-ray diffraction and atomistic molecular dynamic simulations, Salla Ruskamo of the University of Oulu and a European team revealed the role of P2 with unprecedented clarity. Using Escherichia coliliposomes as a model, the authors showed that P2 forms a 3D lattice between myelin bilayers, allowing them to be stacked and compacted as additional layers are added.

These findings, reported in a recent paper in the Journal of Biological Chemistry, further researchers’ understanding of myelin sheath assembly and may be important in tackling myelin-related diseases.