Searching high and low for the origins of life 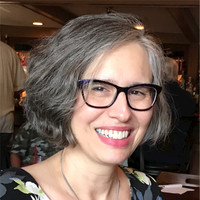 Hot, bubbling fissures in the deep, sunless ocean seem unlikely places for life at all, let alone life’s origin. Yet recent studies have shown that two essential ingredients — amino acids and primitive cell membranes — can form spontaneously and reliably near the hydrothermal vents found in seafloors. The discoveries bolster a hypothesis about life’s origins that some scientists have supported for decades.

Hydrothermal vents are chemical hot springs near fault lines on the ocean floor. Some, called white smokers, have elaborate mineral pillars or chimneys that are full of tiny chambers in which chemical reactions can take place. At 158 degrees Fahrenheit (70 degrees Celsius), the vents are a bit hot for a bubble bath but, it turns out, just right for the formation of amino acids and structures that could serve as cell membranes.

Scientists suspect that deep hot vents like these might have seeded life on Earth about 4 billion years ago. Some hydrothermal vents release alkaline fluids, which could supply the energy needed to build complex organic molecules. And the basic chemistry of life “appears to match what you might expect if life began in this hot, dark, chemical-energy-powered setting,” says earth system scientist Timothy Lenton of the UK’s University of Exeter, a coauthor of a 2017 article on ocean biogeochemistry in the Annual Review of Marine Science.

The vent hypothesis is somewhat controversial, but recent experiments lend weight to it. In one, NASA astrobiologist Laurie Barge and her colleagues showed how amino acids, the building blocks of proteins, could have formed near alkaline vents. Barge, of the Jet Propulsion Laboratory in Pasadena, California, became interested in the origin of life on Earth while searching for life not on Earth. Geology and biology would be closely linked anywhere, she says — whether on another planet or in a deep-sea vent here on Earth.

To learn whether life’s building blocks could have formed near ancient vents, Barge’s team created miniature vents in the laboratory. Their simulated ocean water contained ammonia, the simple organic molecule pyruvate and iron hydroxide minerals, all of which likely existed in Earth’s early oceans. The water was depleted of oxygen and adjusted to 158 degrees F, the temperature of white smokers. Within these simulated vents, the chemical conditions allowed electrons to flow between the iron minerals and pyruvate, yielding the amino acid alanine, the team reported last year in the Proceedings of the National Academy of Sciences.

The researchers could regulate the amount of alanine produced by adjusting the ratios of different iron hydroxide minerals to control how many electrons the iron released — like “a dial that could be tuned up or down,” Barge says. Electrons flow continuously from alkaline vents, providing a constant source to trigger chemical reactions.

NASA / JPL-CALTECH / FLORES
Astrobiologist Laurie Barge has recreated miniature hydrothermal
vents in her NASA laboratory. This time-lapse video shows mineral
chimneys forming within a warm brew of seawater and a few simple,
primordial molecules. Barge found she could generate the amino acid
alanine, one of the building blocks of proteins, in this set-up.

Amino acids are important, but life is organized in cells — and cells can’t operate without a cell membrane. In the second experiment, biochemist Nick Lane at University College London and his colleagues showed how primitive membranes could form near alkaline vents.

Lane used a laboratory replica of ancient deep-sea conditions to determine whether lipid-surrounded bubbles called vesicles — a sort of protocell — could form there. His team added 14 fatty acids and other chemicals, which would likely have been present in the early ocean, to acidic, simulated seawater. The scientists adjusted the liquid to be alkaline, making the chemicals go into solution. When the researchers slowly mixed the solution with seawater, the fatty acids assembled into vesicles. Vesicles formed most readily in conditions strikingly like white smokers — at 158 degrees F with strong alkalinity, the scientists reported in November in Nature Ecology & Evolution.

Earlier studies had failed to form vesicles in hot, alkaline salt water — but that’s because they used fewer types of fatty acids, says Sean Jordan, a biogeochemist at University College London and a coauthor of the paper. His team used a large variety of them, which provided more ways for them to bond with one another.

Some scientists aren’t convinced that life originated at a deep, alkaline hydrothermal vent. David Deamer, a biophysicist at the University of California, Santa Cruz, is one of several who say that salty ocean water would destroy the fatty acids needed to create cell membranes. He has shown that vesicles can form in freshwater — no deep-sea vents needed — by wetting and drying fatty acids. He offers the example of blowing soap bubbles. Soap is disordered in a solution with water, but blow a puff of air into it and the molecules assemble themselves into a membrane.

Imagine a freshwater hot spring, where the surrounding ground gets damp after a rain and then periodically dries out. As things dry up, the compounds dissolved in the water become more concentrated. When drying removes water molecules, energy is released, creating the bonds that allow complex organic molecules to form. 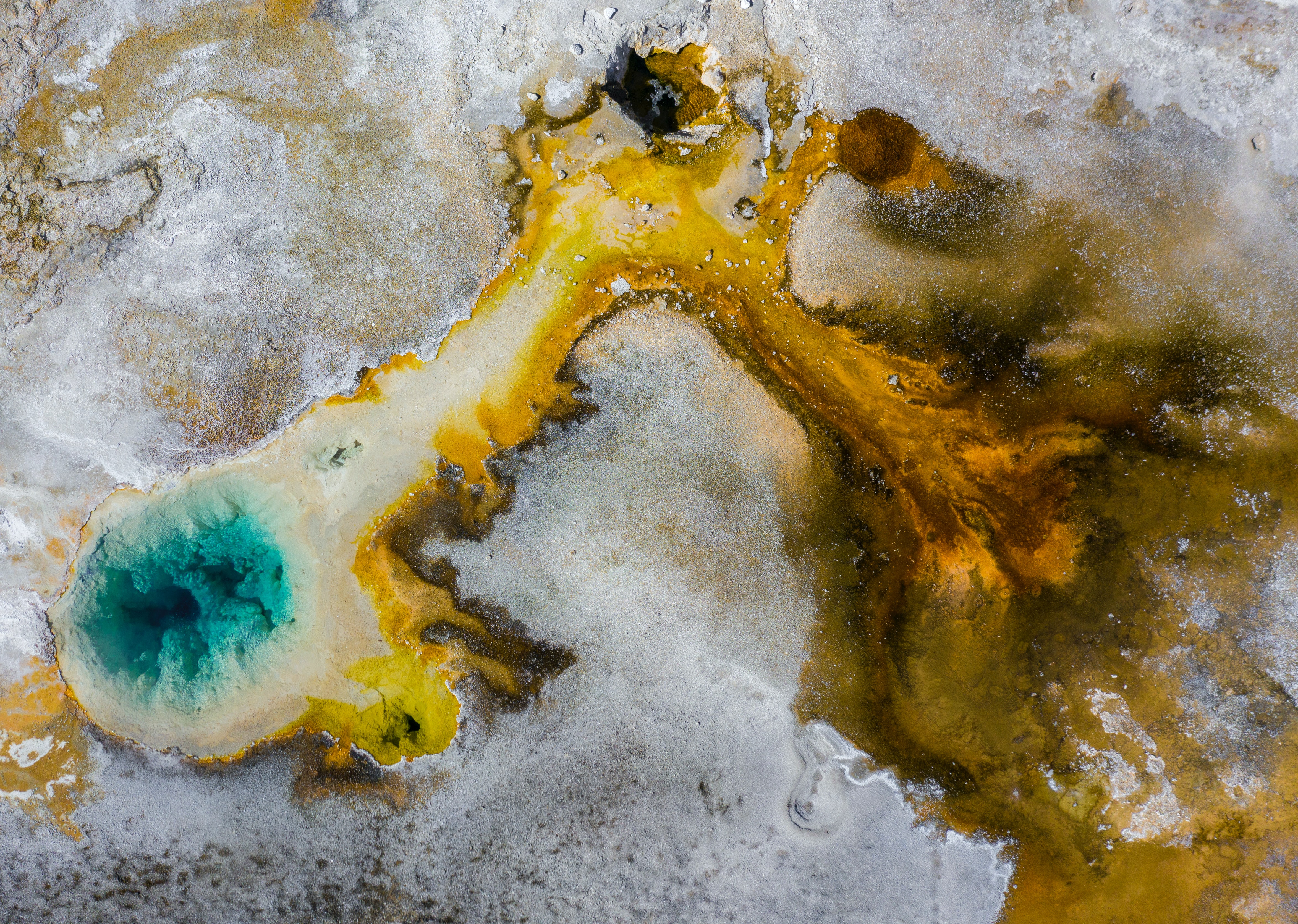 Dan Meyers/Unsplash
Some scientists think that life began not at a marine vent, but at freshwater hot springs on Earth’s surface. This geothermal pool at Yellowstone National Park, seen from the air, may represent that kind of environment.

Another point in favor of the freshwater model is the origin of the first self-replicating molecules, Deamer says. Organisms must have a way to pass down information to the next generation if they are to reproduce; many scientists think that RNA was the first molecule capable of this. Years ago, Deamer and his colleagues created complex molecules that functioned like RNA by wetting and drying simple organic molecules in shallow freshwater pools. The drying process organized molecules to be more complex, without requiring an external jolt of energy.

The story isn’t so simple, though. Both research camps have struggled to show that the basic biological molecules they make in the lab would actually function inside living organisms. Still, the hydrothermal vent proponents say they have all the right ingredients — including the energy needed to kickstart life. White smokers can supply energy in two ways, and one or both could have provided the power needed to build complex organic molecules.

The first happens when alkaline fluids spurt out of the seafloor and collide with acidic ocean water. This pH gradient creates a minor electric charge across the vent chimney. (In another study, Barge lit a small LED by linking hydrothermal chimneys together with wires.) Earth’s early oceans were more acidic than today, suggesting there could have been plenty of energy available at deep-sea vents.

The other way that alkaline vents supply energy is by feeding a process in which electrons flow between chemicals in the ocean and rocks. This underwater electrical current could have driven the first life-giving chemical reactions. “Electricity is necessary to the origin of life,” says Lars Peter Nielsen, an electromicrobiologist at Aarhus University in Denmark. “Electricity makes it all come together.”

Perhaps the most convincing argument for a marine origin of life is timing. Studies that track how life forms have evolved suggest that the earliest life on Earth emerged about 4 billion years ago. That timeline means life almost certainly originated in the ocean, Lenton says. The first continents hadn’t formed 4 billion years ago, so the surface of the planet was almost entirely ocean.

Some of the oldest evidence for life on Earth comes from ancient chemical signatures and fossils in sedimentary rocks in Canada, which likely formed on the ocean floor. One study, reported in 2017 in Nature, even found tube-like fossils that look like microorganisms living near hydrothermal vents today — but in rocks that are at least 3.77 billion years old.

Deamer argues that there would have been some landmasses 3.5 billion to 4 billion years ago, with the flanks of volcanoes emerging from the water. And freshwater pools could have formed on those landmasses through rainfall. If that’s plausible, says Deamer, so is a freshwater origin of life on Earth.

Whether life originated in the deep ocean or shallow terrestrial pools remains to be seen. But it now seems likely that crucial organic molecules, and the membranes to hold them, could have been generated using the geochemistry of early Earth.