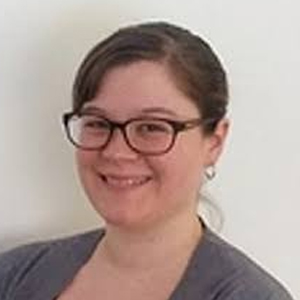 Well over half a million people die of HIV/AIDS each year, making it one of the leading causes of death in the world. According to data from 2019, 38 million people around the world live with HIV/AIDS.

The good news is that in 1990, researchers found the first effective treatment for HIV/AIDS, called antiretroviral therapy. The therapy represents a cocktail of antiretroviral drugs, each designed to limit viral replication and infection. By the end of 2019, an estimated that 25.4 million people accessed antiretroviral treatment for their HIV/AIDS — about two-thirds of those infected — preventing a large portion of the deaths that this sexually transmitted infection previously caused. That said, antiretrovirals have to be taken every day, and resistance and progression from HIV to the historically untreatable AIDS can occur. 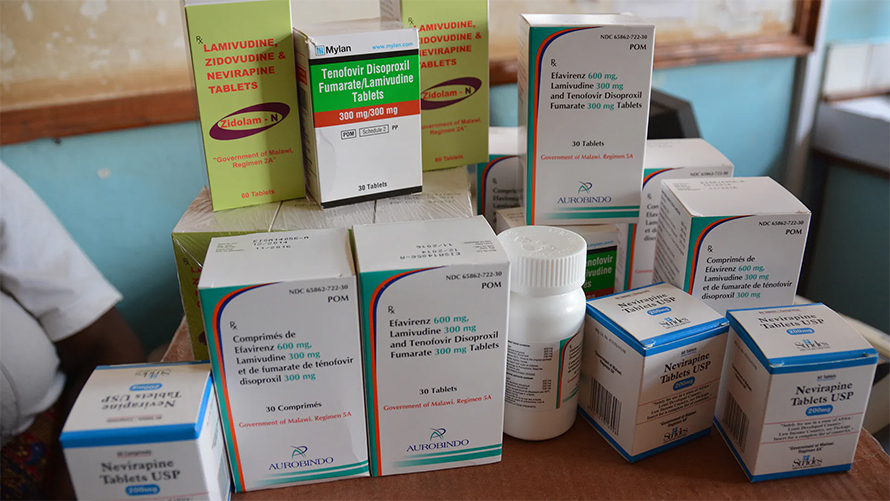 Researchers at the University of Iowa have now found that semen, which is the primary mode of transportation of HIV between humans, can affect how well antivirals — including those used in ART therapy — work against the virus.

Semen contains fructose, the primary energy source that spermatozoa, or sperm, need to swim and survive. If sperm didn’t have the energy they get from fructose, it would be like a runner trying to complete a marathon without eating anything prior to the event. For that reason, fructose in semen has long been the target of infertility studies, but could it have an effect on HIV transmission beyond simply slowing sperm? 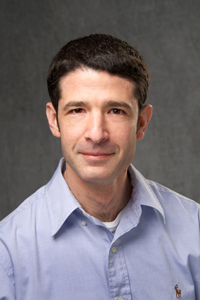 Physician-scientist Hillel Haim, an ASBMB member, oversaw the team’s work at the University of Iowa Carver College of Medicine.

According to the study published recently in the Journal of Virology, fructose can reduce HIV’s ability to bind to 2G12, a human antibody that typically targets viruses like HIV for destruction. Instead of neutralizing HIV, the 2G12 antibody produced by a person’s immune system is temporarily “clogged” with fructose, which sticks extremely well to the antibody. This means that, from the point of ejaculation when semen is introduced to HIV, the two work together to prevent antibody functioning. This leaves the HIV free to go on infecting other healthy cells, free from immune detection. However, the effect of fructose is likely not permanent, as the fructose-laden semen becomes scarce as the HIV moves beyond the reproductive tract. This temporary partnership makes it easier for the HIV virus to get into the body without being immediately tagged for destruction by the 2G12 antibody, but is by no means a permanent key to freedom.

They also investigated an HIV treatment called Griffithsin which is a protein that comes from algae. Griffithsin normally works by binding to molecules on the surface of the virus, and linking them all together in a complex matrix, so the HIV cannot bind to anything else. This ties up the surface with Griffithsin, restricting any ability of HIV to infect healthy cells. In a cellular model, they examined the effect of adding fructose to Griffithsin plus HIV, and found that fructose reduced the treatment’s ability to bind with HIV. This suggested that fructose was interacting with Griffithsin the same way the surface molecules of the HIV would, rendering it “full” and unable to bind to HIV. These findings suggest that fructose in semen may be able to inhibit attachment of HIV to target cells, but the authors say more investigation is needed to know that for certain. 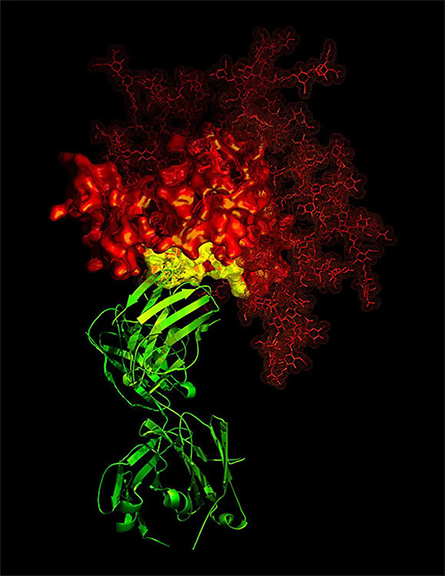 National Institute of Allergy and Infectious Diseases, NIH
An example of antibody (green) targeting a critical area (yellow) of a viral protein
(red, in this case HIV).

The investigators chose to adopt a different cell model approach than most human semen studies which use human clinical samples for their work. They prepared a synthetic formulation which they called “simulant seminal plasma” (sSP) to use instead of human samples. This avoids the problem of attaining ethics approval for work with human samples, and the complications of differences between individual sperm samples — making it easier to replicate studies. The sSP formulation is made of many of major constituents of semen all at the right pH, and mimics human samples. The importance of this lies in repeatability of future work, and it’s wide-reaching applications to future STI, infertility, and cancer studies. Imagine being able to further investigate these problems and potential treatments by using a formulation that is standardized and accurately mimics human semen. It would be a major step forward in the research world.

Finding that fructose in human semen seems to make antivirals we use against HIV much less effective has important implications for antiretroviral therapy, used by millions of peopl. If the fructose naturally occurring in semen could render these less effective, scientists may need to reformulate these drugs. It may also be important to test future novel antivirals against HIV in the presence of elevated fructose, to ensure the fructose does not render them ineffective. Finally, the synthetic semen formulation outlined by this research introduces a novel approach to STI/infertility/cell culture research involving human semen. Together, this story packs one heck of a punch into the HIV research world, and provides hope for improvement of future studies and the treatments they may result in.

Marnie Willman is a Ph.D. candidate at the University of Manitoba.