UV Safety Month, headed up by the American Academy of Ophthalmology and observed by other health-focused organizations and agencies, usually manifests in public-education campaigns with two main thrusts: how to protect your eyes from the sun’s harmful rays and how to prevent skin cancer while still having summer fun. 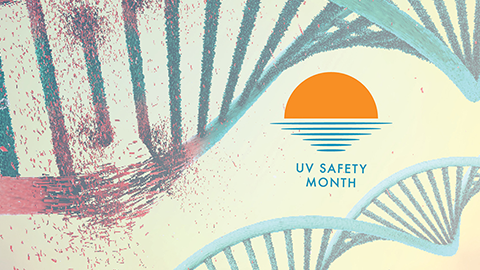 Such information and advice are both helpful and necessary, and we certainly believe in UV-shielding sunglasses and sunscreen, among other protective measures. But we chose to participate in the observance for other reasons.

On any given day, ASBMB members and others who publish in our journals are both investigating the biological effects of ultraviolet light and using it as a tool in their research projects.

Below is a collection of recent papers (except for one very cool one we just had to include at the end) related to UV light and published in ASBMB journals. Many thanks to science communicator Jonathan Griffin for his skillful curation.

How eyeballs take out the trash

Debris from cells killed by UV radiation can accumulate in the eye, contributing to cataract formation. But, luckily, the eye lens has developed ways to clear this material. Researchers from Florida Atlantic University investigated exactly how eyes protect themselves from UV light and reported in the Journal of Biological Chemistry that lens epithelial cells phagocytize, or eat up, dead cell debris. It’s probably still a good idea to avoid looking at the sun, though, as the authors showed that too much UV light exposure damages proteins critical for phagocytosis.

Why sunlight and autoimmunity can be a bad mix

Exposure to UV radiation aggravates symptoms in patients with autoimmune disorders, such as lupus and dermatomyositis, but scientists have not been sure why. Researchers from the University of North Carolina showed that, in human skin cells, UV-induced DNA damage exacerbates the immune response to pathogenic stimuli presented by viral or microbial infections. The authors write in the Journal of Biological Chemistry that, although UV alone does not induce immune pathways, it may work together with infections to negatively affect patients with autoimmune disorders.

Ultraviolet A light, or UVA, which comprises a specific range of wavelengths on the UV spectrum, makes up most of the UV in sunlight and is a major risk factor for skin cancer. However, exactly how UVA contributes to skin cancer has remained a mystery. Researchers in China and the United States recently uncovered that UVA promotes transcription of the protein p62, which upregulates expression of molecules that drive skin cancer development. The study, published in the Journal of Biological Chemistry, points to p62 as a potential target for skin cancer treatment.

Shining light on the effects of phototherapy

The combination of the light-sensitive drug psoralen and ultraviolet A light, or PUVA, is used to treat various skin diseases and prevent pathogen transmission during platelet transfusions. However, the biochemical effects of PUVA are not well understood. In a study published in Journal of Biological Chemistry, researchers in Belgium analyzed the effects of PUVA on signaling within platelets, revealing that the treatment prevents recruitment of certain kinases to the membrane, which could disrupt platelet function and increase bleeding risk.

UV radiation has increased in recent years and is modeled to continue doing so in the coming decades. These changes could harm forests, which play important roles in the global ecosystem and supply material for timber products. To uncover how Pinus radiata, a fast-growing species of pine, may respond to the sunlight of the future, a team of researchers in Europe exposed trees to predicted doses of UV radiation. Their results in the journal Molecular & Cellular Proteomics reveal the identities of proteins associated with protective responses in pine, which could be useful information for breeding UV tolerant genotypes.

The nucleolus is a structure within the nucleus that is known to carry out important tasks related to rRNA processing and ribosome assembly, but scientists have been uncertain how this organelle responds to UV radiation. Recently, an international team of researchers used imaging and proteomics to show that UV exposure altered nucleolar morphology and negatively affected proteins associated with DNA repair in human skin cells. Their results are published in the journal Molecular & Cellular Proteomics.

Both the passing of time and UV radiation contribute to skin aging, but a team of South Korean researchers may have identified a way to slow the effects of each. In a study published in the Journal of Lipid Research, the omega 3 fatty acid eicosapentaenoic acid was topically applied to the skin of human subjects of varying age. The authors found that the fatty acid suppressed UV-induced enzymes that cleave collagen and also increased the expression of collagen forming proteins, reducing the effects of both age and radiation on human skin.