Mini-organs push along COVID-19 and other virus research

While studies in mice and people can be slow, researchers are making fast progress testing medications in miniature airways and guts made of human cells.

To the naked eye, the blobs in Josef Penninger’s lab dishes don’t look like much. Suspended in nutritious gel, they’re pale in color and a millimeter or so across.

But look closer, with a microscope, and you see tiny networks of interconnected blood vessels. “They are seriously beautiful,” says Penninger, a medical geneticist at the University of British Columbia in Vancouver. Starting with human stem cells, he and his team have created miniature replicas of the vascular system. And they’ve used them to test a treatment for COVID-19.

Called organoids, these tissue bits come in diverse varieties: lung mimics with air sacs, gut versions sporting the tendrils that absorb nutrients, and more. They’re handy for viral research, offering a way to study how viruses enter cells and cause disease, as well as how the tissues fight back.

They’re not the only option, of course. The COVID-19 crisis has scientists scrambling to study infection and test treatments in as many ways as they can. Trials for drugs and vaccines have already started in people, but many medications aren’t ready for that stage yet, and it’s difficult to study the viral life cycle in human beings.

Others are working with mice, but those experiments can be slow, and animal responses to infections often differ from those of people. Results come faster with cells that thrive in flat layers, such as African green monkey kidney cells or those from a human liver cancer — but these tend to be highly abnormal, more akin to tumors than healthy body tissues in all their 3-D complexity.

Organoids, in contrast, host many of the cell types in the real tissue, organized in the right way, says Hans Clevers, a cancer and stem cell biologist at the Hubrecht Institute in Utrecht, Netherlands, a pioneer in organoid research and coauthor of an overview of the field in the 2020 Annual Review of Pathology. They are about as close as scientists can get to working on human tissues outside of actual people, and provide a useful intermediate between abnormal cell lines and whole-animal studies.

Scientists have been working on organoids for about a decade, and infecting them with viruses since at least 2012. The Zika virus that caused an outbreak in 2015–16, for example, was linked to small brains in newborns, but since scientists couldn’t study the infection in growing fetuses, they turned to brain organoids. Among other things, that helped them to identify which cells the Zika virus infects (progenitor cells that give rise to other brain cell types were especially susceptible) and what might cause small brains (the infection killed or slowed replication of progenitor cells, leading to smaller organoids).

Scientists also recently developed an intestinal organoid model that they could infect with the norovirus that causes stomach flu, which should lead to development of treatments, Clevers says.

In the case of COVID-19, scientists already have used organoids and related systems to confirm that SARS-CoV-2, the virus that causes the disease, infects gut tissues. They have also been able to test and identify promising medications. They’ve even built organoids based on the tissues of bats, the likely source of the virus, in order to study other coronaviruses that have the potential to cross over into people. 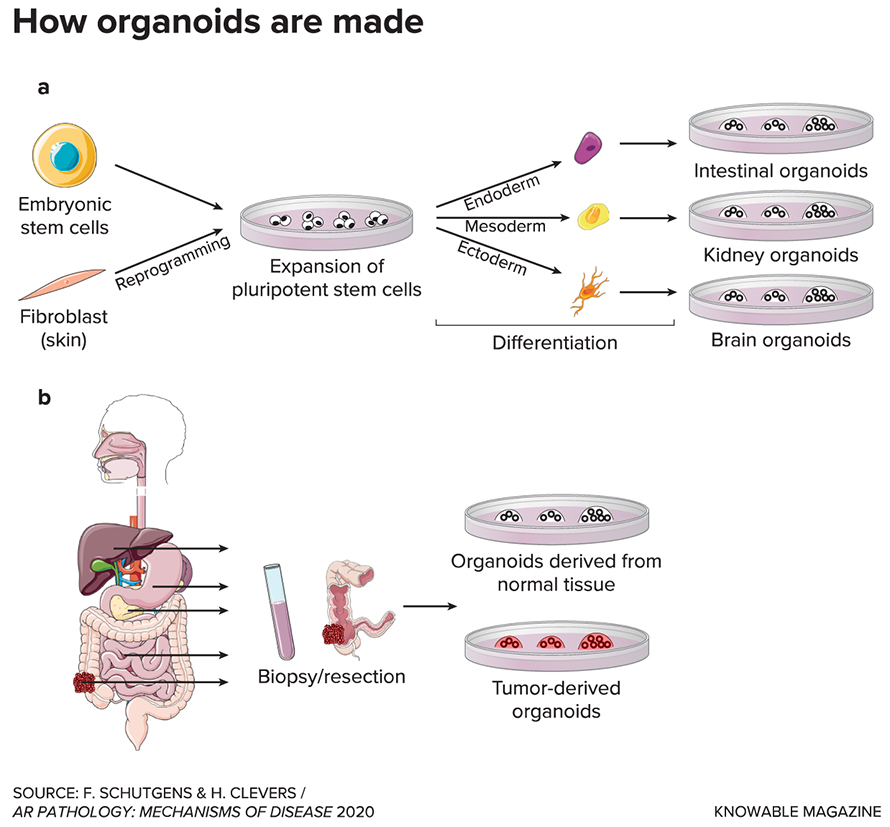 Here are two ways that organoids can be created. In the top example (a), the starting materials are either embryonic stem cells or adult body cells that have had their developmental program rewound so that they are once again pluripotent (able to become many tissue types). The cells can then be induced to form the three embryonic layers (ectoderm, mesoderm and endoderm) and specific body tissues. In the second method (b), scientists derive organoid starting materials from adult stem cells found in tissue biopsies or material from surgeries in which cancerous tissue was removed (resection).

COVID-19 in organoids, and beyond

Soon after the first genetic sequence for SARS-CoV-2 came out in January, Penninger assembled a group of collaborators to investigate the virus’s effects in diverse organoids. Though COVID-19 is primarily a respiratory disease, the human ACE2 protein that the virus uses to enter cells is found throughout the body, and the collaborators wanted to test whether it could infect organoids of the gut, kidney and blood vessels.

In mid-May, the team reported that not only could the virus infect the kidney and blood vessel organoids, but also that a lab-made version of ACE2 could lure the virus away from human cells, minimizing infection of the organoids. A company founded by Penninger is testing this decoy treatment in people with severe COVID-19.

Clevers’s team, working separately, found that gut organoids were easily infected and produced copious amounts of virus. That explains why some people experience symptoms such as nausea and diarrhea, and why sewers may be a good place to check a community’s infection rates, he says. The group expects to report results from an airway organoid soon.

Cell biologist and bioengineer Don Ingber and colleagues at Harvard University’s Wyss Institute in Boston have been working on models that mix tissues and copy blood flow to get results even closer to the real thing, he says, though they look more like rubbery USB sticks. Ingber’s team combines human cells with mechanical devices that provide further structure to the tissues, and even make them move. Their lung-on-a-chip, for example, has air flowing over lung cells on top, with blood vessel cells and a blood substitute on the bottom, closely mimicking the actual structure of lung sacs. By expanding and contracting vacuum tubes along the sides of the chip, the researchers can make the lung “breathe.”

“We have found that to fully recapitulate human-level responses, we need to have all of that — the physical environment as well as the chemical environment,” says Ingber who, with colleagues, described the approach in the 2015 Annual Review of Pathology.

WYSS INSTITUTE AT HARVARD UNIVERSITY
A human lung-on-a-chip developed by scientists at the Wyss Institute mimics many properties of human lungs, including blood flow and airflow, and can be used to test drugs and toxins.

In a recent study that has not yet been peer-reviewed, Ingber’s team used their airway chip — lined with cells from the bronchial tubes on one side and vasculature on the other — to mimic how the influenza virus moves from person to person. They used it to test treatments and to show how the constant presence of antiviral medications caused the virus to mutate to resistant forms.

In another preliminary paper, the team performed similar experiments related to COVID-19. Since their laboratory wasn’t built for dangerous pathogens, they used other viruses engineered to make the SARS-CoV-2 spike protein that binds ACE2 to enter cells. The team tested the infection-fighting ability of seven medications that are approved by the Food and Drug Administration for other conditions.

All seven had been effective against SARS-CoV-2 in the simple, but abnormal, monkey kidney cell model. But when they were used in the airway chip at the maximum dose people can receive, only two strongly blocked entry of the virus into the lung cells: the malaria drug amodiaquine and the breast cancer medication toremifene. Ingber is in talks with the FDA to promote clinical research on those medications, and continuing to test FDA-approved medications that might be more potent against SARS-CoV-2. He’s also using a chip that mimics lymph nodes to study how people might develop immunity to flu and SARS-CoV-2.

Organoids could also help scientists identify the next dangerous viruses that might infiltrate the human race. New viruses emerge regularly from wild animal populations, and scientists would like to predict which will be most dangerous. Researchers are already using airway organoids to test novel influenza strains, to predict how infectious they could be in people.

Thanks to recent work, they can also turn to organoids made from bats, which carry a diverse array of viruses with little effect on their own health. Bats are thought to be the original host for SARS-CoV-2 and other coronaviruses, but researchers have only been able to grow a few of their coronaviruses for study in the laboratory.

That is expected to change. In mid-May, researchers in Hong Kong reported that they had developed organoids, based on intestinal cells of horseshoe bats, that support SARS-CoV-2 infection and replication. By growing various coronaviruses in these tissues and also testing them in human organoids, scientists may be able to identify other viruses with high potential to harm people, and thus get a head start on drug development, Clevers says. Conveniently, it requires only one animal, be it a bat or other potential host animal, to create an everlasting supply of organoids, he adds. “You can grow, probably, any internal organ of any mammal.”

Organoids can do a lot — but not everything, Penninger acknowledges: “This will not replace animal models.” Most organoids lack the complex interplay between different organs, though Ingber is able to link together several chips representing different organs. They also don’t often include cells coming in from the immune system, Clevers adds, although several labs are working on that.

But to understand how human tissues respond to infection and treatment, they’re a great bet, and the current pandemic has led numerous labs to study SARS-CoV-2 in organoids, Penninger says. “This whole field totally exploded.”