Handing over heme for degradation

Heme is a ring-shaped complex formed by four pyrrole molecules that bind iron, and it is an indispensable oxygen-carrying component of hemoglobin in blood and myoglobin in muscle cells. The breakdown of heme into biliverdin, carbon monoxide and iron plays a number of important physiological roles. Biliverdin is a precursor to bilirubin, a natural antioxidant, and endogenous carbon monoxide is a vasodilatory gas that has anti-inflammatory properties. Furthermore, heme itself at high concentrations can be toxic, promoting oxidative stress and lipid peroxidation. Thus, regulating heme levels is critical for human health, but the mechanisms responsible for signaling its degradation are not well known.

Human heme oxygenase-2, or HO2, is an enzyme that converts heme to biliverdin when heme binds to the enzyme’s core catalytic active site. HO2 also contains two short amino acid sequences known as heme regulatory motifs, or HRMs, that can bind iron-containing heme and are involved in governing heme function.

In a recent paper in the Journal of Biological Chemistry, Angela Fleischhacker and colleagues at the University of Michigan School of Medicine write that they have detected a protein-mediated transfer of heme between the HRMs and the HO2 core. Using hydrogen–deuterium exchange mass spectrometry, the authors monitored the dynamics of HO2 with and without iron-containing heme bound to the HRMs and to the catalytic core, and they detected conformational changes in the core only when it was in an unbound state. Moreover, the researchers observed heme being transferred to the core from the HRMs and vice versa, achieving equilibration.

Based on these findings, the authors present a new heme transfer model that ascribes functional significance to heme binding of HRMs in addition to the catalytic site on HO2. They suggest that this mechanism may be essential for toggling between the degradation and maintenance of physiological heme levels. 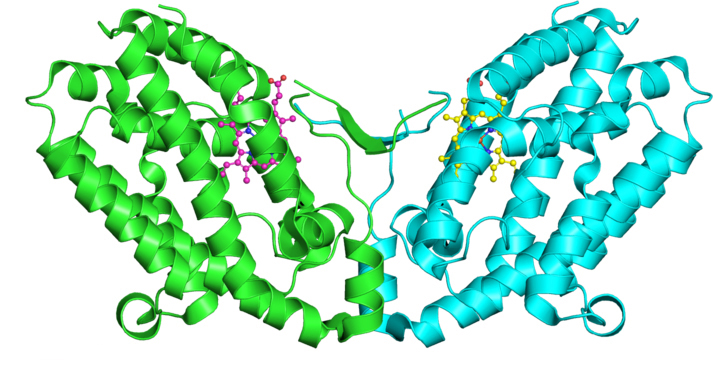 The discovery of the CRISPR-based genome editing system has driven innovation in personalized medicine and incited increased scrutiny of the precision and specificity of the methodologies being employed. Cas12a, an RNA-guided endonuclease in the bacterial type V-A CRISPR-Cas anti-phage immune system, recently has emerged as an alternative gene-editing tool capable of binding and cutting double-stranded DNA targets with high specificity, but this described specificity is paradoxical to the function of Cas12a as an immune responder fighting against rapidly evolving pathogens.

Their results, which appear in a recent paper in the Journal of Biological Chemistry, provide important details about the natural role of Cas12a and demonstrate its potential for nonspecific editing.

Cholesterol and the ABCs of ATP signaling

The extracellular signaling of ATP is implicated in a variety of important physiological and pathophysiological roles, but the mechanisms responsible for regulating ATP release are not well understood. Researchers at Yale University are helping to solve this mystery by identifying a link between cholesterol and the release of ATP.

In a paper published in the Journal of Biological Chemistry, Patrick Dunn and colleagues used hypotonic conditions to induce ATP release by volume-regulated anion channels in HEK-293 cells and mouse cerebellar granule neurons. They then performed a gain-of-function screen for modulators of ATP release and identified two ATP-binding cassette subfamily G member 1 variants as modulators. These transporters are involved in regulating cellular cholesterol, suggesting that how cells handle cholesterol may affect their extracellular signaling. The authors tested this by using methyl-beta-cyclodextrin to deplete cellular cholesterol levels, resulting in ATP export.

These findings raise interesting questions, such as whether individuals afflicted with cholesterol-linked diseases present with abnormal extracellular ATP release, and the results could be instrumental in developing improved therapeutic regimens for the treatment of cholesterol-related maladies.

The evolutionary emergence of PD-L2

The programmed cell death 1, or PD1, receptor ligands PD-L1 and PD­-L2 are transmembrane proteins that play critical roles in modulating immune system activation. However, little is known about the specific function of each ligand and when their roles differentiated.

In a paper recently published in the Journal of Biological Chemistry, Elliot Phillips of New York University School of Medicine and collaboratorsexplore what makes PD-L2 unique and describe its moment of evolutionary divergence. Using site-directed mutagenesis, surface plasmon resonance and crystallography, the authors identified an unexpected loss- and gain-of-interaction mutations that resulted in structural differentiation from PD-L2 without affecting function. But why did this protein diverge structurally without an alteration in function? The authors use phylogenetic analysis to answer this question, revealing that the new structural features appeared simultaneously with the emergence of placental mammals. Their results suggest that the emergence of PD-L2 from PD-L1 may be important to immune system adaptations required for placental gestation.

Getting oxidized nucleotides out of the pool

Human MuT homologue 1, or MTH1, reduces genotoxicity by removing oxidized nucleotides from the nucleotide pool to prevent their incorporation into the genome. MTH1 also actively removes nucleotides that have undergone methylation, a post-translational modification. This is an important feature because, if allowed to incorporate into the DNA, methylated nucleotides could have detrimental effects on cellular epigenetic programming.

Using mutant zebrafish, crystallography, mass spectrometry and enzyme kinetic assays, Emma Rose Scaletti of Stockholm University and collaborators demonstrate that MTH1 catalyzes the hydrolysis of N6-methyl-dATP to N6-methyl-dAMP to prevent its incorporation into DNA. The authors also identify the structure of N6-methyl-dAMP–bound human MTH1, revealing why N6-methyl-dATP is a good MTH1 substrate.

Their work, published in the Journal of Biological Chemistry, reveals a mechanism that helps to prevent the impaired regulation of epigenetic control and RNA metabolism.