Medicine that mitigates melanoma. Mutations that promote parasite survival. Rab11-reorganization of glycan modification. Read about recent papers in the Journal of Biological Chemistry on these and other topics.

About 83% of ocular melanoma, a type of eye cancer that develops in cells that produce pigment, arises from the uvea, a layer of the eye beneath the sclera and cornea, according to the American Cancer Society. While rare, uveal melanoma, or UM, is particularly deadly. About 50% of patients with UM develop metastatic disease; with a lack of effective treatment, the long-term prognosis is poor. 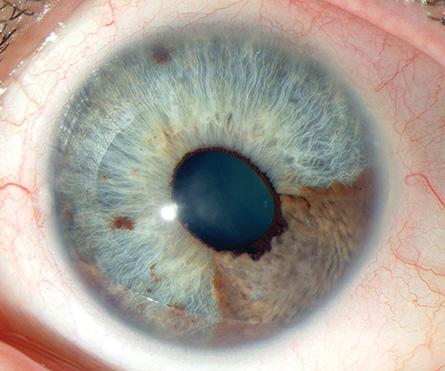 Jonathan Trobe/University of Michigan Kellogg Eye Center
This photograph shows a melanoma in the iris of an eye.

A new paper by Michael Onken and colleagues at the Washington University School of Medicine in St. Louis published in the Journal of Biological Chemistry explores the therapeutic potential of FR900359, or FR, an extract from the evergreen plant Ardisia crenata that selectively inhibits Gq/11 activity. Using cultured UM cell lines and human UM tissue assays, single-cell RNA-sequencing and animal experiments, the researchers showed that all constitutively active forms of Gq/11 found in UM are sensitive to FR.

The authors also found that FR arrests UM cell growth but does not kill Gq/11-driven UM cell lines and that it targets UM tumor cells from patient biopsies of primary tumors with both low and high metastatic potential. Lastly, the researchers identified a therapeutic window in which FR strongly arrested tumor growth without causing major effects on heart rate, liver function or behavior.

These findings show new ways that clinicians might be able to use Gq/11 inhibitors such as FR for the treatment of UM patients either alone or in conjunction with current standards of care.

Severe acute respiratory syndrome coronavirus 2, or SARS-CoV-2, initiates infection by using its spike glycoprotein to engage with the surface of host cells. Previous research in cell cultures and animal models has shown that when the spike glycoprotein engages with host cell receptors, other coronaviruses, such as MERS-CoV and SARS-COV-1, undergo endocytosis. However, researchers don't know yet whether SARS-CoV-2 follows a similar cell entry process and, if so, which mechanism facilitates its entry into the host cell.

Using purified spike glycoprotein and a lentiviral model of SARS-CoV-2 infectivity, Armin Bayati, Rahul Kumar and colleagues at McGill University showed that SARS-CoV-2 undergoes rapid endocytosis when it engages with the host cell surface. The researchers found that upon binding with membrane host cell receptors, SARS-CoV-2 is engulfed by vesicles coated in clathrin, a protein critical for shaping vesicles and sorting their cargo. SARS-CoV-2 infectivity was reduced by blocking clathrin-mediated endocytosis through the knockdown of clathrin heavy chain, a component of clathrin necessary for its function.

These findings, published in a paper in the Journal of Biological Chemistry, detail the role of clathrin-mediated endocytosis in viral infectivity and may support the development of new therapies for the treatment of COVID-19.

Malaria is a serious and often fatal disease that afflicts over 200 million people worldwide every year, according to a 2020 World Health Organization report. It is spread to humans through mosquitoes carrying Plasmodium parasites. Five species of these parasites cause malaria in humans, and Plasmodium falciparum is responsible for the most common and deadliest form of the disease. Health care providers take a two-pronged approach to combat malaria around the world. One common prevention strategy is the use of drugs that suppress the blood stages of malaria infection, thereby preventing the disease through chemoprophylaxis. However, P. falciparum resistance to antimalarials is a recurring problem, undermining malaria control efforts, so scientists continue to search for new strategies to treat infections.

The drug 4′-deaza-1′-aza-2′-deoxy-1′-(9-methylene)-immucillin-G, or DADMe-ImmG, inhibits the purine nucleoside phosphorylase PfPNP, an enzyme that is essential for P. falciparum growth. Treatment with DADMe-ImmG clears P. falciparum infections in a primate malaria model, but P. falciparum cultured in the presence of DADMe-ImmG develops resistance to the inhibitor.

In a study published in the Journal of Biologial Chemistry, Yacoba Minnow and colleagues at the Albert Einstein College of Medicine describe their efforts to determine how PfPNP develops resistance to DADMe-ImmG. Using covalently linked native and mutant PfPNP monomers, the researchers showed that PfPNP mutants alone are unable to execute the essential function of PfPNP due to a loss in catalytic properties. However, hybrid molecules consisting of mutant and native subunits give rise to DADMe-ImmG resistance while also preserving catalytic function. As a result, these mixed PfPNP molecules can promote parasite survival despite the presence DADMe-ImmG.

Sialylation, or the addition of sialic acid to glycoproteins, is a modification involved in embryonic development, neurodevelopment, oncogenesis and immune responses. The enzymes responsible for catalyzing this modification, known as sialyltransferases, primarily reside and function in the endoplasmic reticulum, and it is unclear how their localization to this region and trafficking to other regions are regulated.

In previous work, Masato Kitano at Osaka University and colleagues identified a connection between N-glycosylation and Rab11, a small GTPase that is a key player in the post-Golgi transport that connects recycling endosomes and other compartments. The authors recently elaborated on Rab11's role in glycan modification. By knocking down Rab11 protein levels in HeLa cells and using liquid chromatography–mass spectrometry, they discovered that a reduction in Rab11 selectively enhanced the sialyation of glycoproteins. They found that the major alpha-2,3-sialyltransferase ST3GAL4 was confined tightly to the trans-Golgi network in the absence of Rab11 versus its more diffuse localization when Rab11 is present.

These findings, published in a recent article in the Journal of Biological Chemistry, present a new mechanism for the regulation of glycosylation.

The human mannose receptor is expressed on macrophages and plays a critical role in innate and adaptive immunity as well as reducing damage after tissue injury. The receptor's function depends on its C-type carbohydrate-recognition domain 4, or CRD4, which contains a site for Ca2+-dependent interaction with sugars. However, researchers do not yet know the details surrounding CRD4–ligand interactions.

In an article published in the Journal of Biological Chemistry, Hadar Feinberg and colleagues at Stanford University School of Medicine used glycan array screening to identify mannose-containing ligands that are likely to interact strongly with CRD4. The authors then explored mechanisms of ligand–CRD4 binding by generating and examining crystal structures of CRD4, and their structural analyses highlighted several distinctive aspects of ligand binding by the mannose receptor to additional classes of ligands.

The authors state that the details revealed in this work could help to explain differences in the way pathogens interact with host receptors. 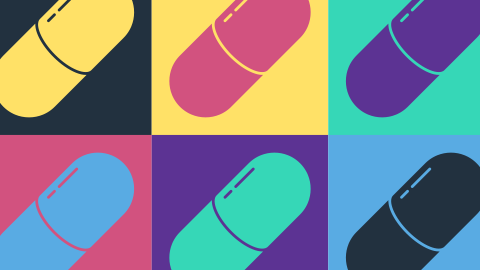