Despite major advances in the treatment of cardiovascular disease, or CVD, with statins, antihypertensive and antithrombotic drugs, a residual number of patients with CVD remain untreated. These patients have a genetic disorder or extremely high levels of triglycerides (hypertriglyceridemia) that render them unresponsive to current therapies. To find new therapies, researchers are targeting circulating lipids and lipoproteins. A sedentary lifestyle and a diet high in sugar, fat and processed carbohydrates increase a person’s risk of developing CVD. 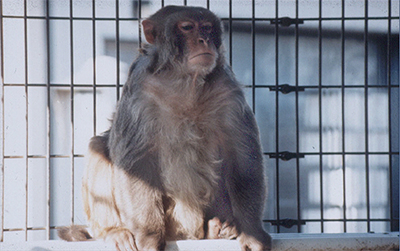 Courtesy of Peter Havel
Adult male rhesus macaques were fed an unrestricted diet and water along
with a flavored 15% fructose solution and then treated with fish oil
supplements to demonstrate the role of diet on ANGPTL3 protein levels.

Two main sugars in the human diet are glucose and fructose. Glucose, the major component of dietary carbohydrates, is a product of starch. Fructose is found mainly in soft drinks and other beverages, desserts and candies. Although similar in calories, glucose and fructose are metabolized differently. Glucose is absorbed rapidly by almost all cells in the body, and its levels remain balanced through insulin release. Fructose is metabolized mainly by the liver, and its levels are not regulated by insulin; increased fructose consumption increases circulating triglycerides, low-density lipoprotein cholesterol, and fat around organs and blood vessels. In the process of de novo lipogenesis, fructose in the liver metabolizes to lipids.

The liver expresses and secretes angiopoietinlike 3, or ANGPTL3, which plays a role in lipid clearance; therefore, scientists see this protein as a promising therapeutic target for developing lipid-lowering drugs that target formation of triglycerides. In a recent paper in the Journal of Lipid Research, Peter Havel and colleagues wrote that consumption of dietary fructose increases circulating levels of ANGPTL3 in rhesus macaques by 30% to 40%. Increased ANGPTL3 correlated with increased levels of plasma triglycerides.

“These are the first studies to demonstrate the effect of diet (fructose and omega-3 fatty acids in fish oil) on ANGPTL3,” Havel said, “and suggest that ANGPTL3 is a promising target for management of hypertriglyceridemia.”

The role of dietary sugars in metabolism is a focus of Havel’s lab at the University of California, and the researchers have developed the rhesus macaque model of metabolic syndrome “in which consuming sugar-sweetened beverages accelerates the development of insulin resistance and dysregulation of lipid metabolism,” he said.