We offer a selection of papers from the Journal of Lipid Research. Topics include fatty livers and hormones, how pathogens exploit lipid rafts and the lipoprotein–blood clot link. 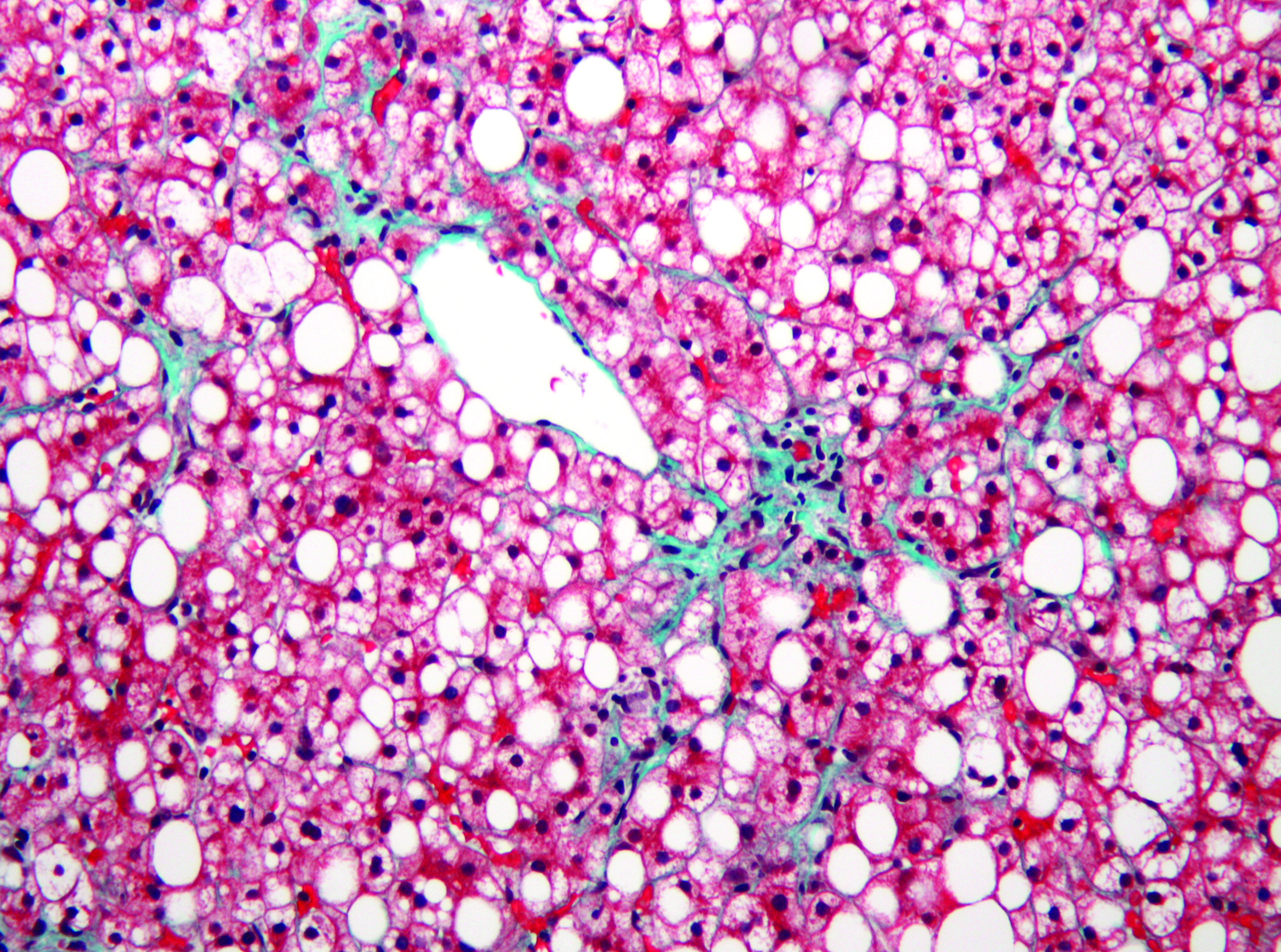 Nephron/Wikimedia Commons
In this micrograph of nonalcoholic fatty liver disease, the liver has a prominent retention of fat (white) and mild fibrosis (green). The hepatocytes are stained red.

When too much fat is deposited in the liver, typically due to poor diet, a person can develop nonalcoholic fatty liver disease, or NAFLD. The hormonal system regulating the blood pressure renin–angiotensin–aldosterone system, or RAAS, may play a significant role in NAFLD presentation, although studies have yielded conflicting results. Some researchers have observed that blood pressure–lowering drugs such as beta blockers appear to affect weight gain associated with lipid accumulation, while others have not — or have found that blockade of a different pathway prevents weight gain.

Angiotensinogen, or AGT, an RAAS component primarily produced in the liver, is converted to the hormone angiotensin I by renin and angiotensin II by a different enzyme. Among its effects, angiotensin II increases blood pressure. This suggests that reducing AGT production could have an effect on NAFLD.

To study this question, Xin-Ran Tao and colleagues at the Zhejiang University School of Medicine engineered mice that did not produce AGT in the liver, placed some on a high-fat diet and investigated the effects. These mice gained less weight on the high-fat diet than mice with normal AGT. Also, fatty acid synthesis in the liver and liver steatosis, a precursor to NAFLD as fat accumulates, both were reduced in the non-AGT mice on a high-fat diet.

The researchers found that the pathway responsible for activating the transcription factor that controls fatty acid synthesis in the liver was reduced in the mice without AGT, linking AGT to fatty acid synthesis and suggesting why Fatty livers and hormones these mice had less weight gain on a high-fat diet.

This study, published in the Journal of Lipid Research, shows that hormonal systems may play a significant role in the lipid accumulation that occurs in NAFLD, and depletion of AGT may attenuate the effects of a high-fat diet.

Blood clots affect 600,000 people in the United States each year. In a natural process called fibrinolysis, the enzyme responsible for keeping clots together is inactivated by a protease. High levels of the lipid-containing complex lipoprotein(a), or Lp(a), are linked to cardiovascular disease. Lp(a) may inhibit protease activation; therefore, lowering its levels could break up dangerous blood clots, though this hypothesized connection has not been confirmed in humans.

Michael Boffa and colleagues at the University of Western Ontario and the University of California, San Diego, write in the Journal of Lipid Research that their recent study shows substantially lowering elevated Lp(a) levels in patients does not affect fibrinolysis when compared to similar patients receiving a placebo. The researchers found that clotting factor levels and clot lysis times at several time points after administration were not significantly different between the two patient groups. These results suggest that Lp(a) may not have an appreciable role in inhibiting fibrinolysis; studies with more patients are needed.

Throughout a cell’s plasma membrane are so-called lipid rafts. These small regions contain extra cholesterol and phospholipids and clusters of proteins involved in endocytosis and exocytosis for communication with the outside world. However, pathogens exploit lipid rafts to get through the membrane and into the cell. In a recent paper in the Journal of Lipid Research, Michael I. Bukrinsky and an international team reviewed this process from entry to exit.

Viruses, such as influenza A, make contact with specific receptors clustered in the lipid raft; the influenza virus rolls over many sites on the lipid raft until the precise host receptor protein is located. Other viruses gain entry by making pores in the membrane or hijacking the endocytic pathway to fuse virus with cell. To exit, the viruses can siphon a host pathway, where they are released outside the cell.

Although bacteria are larger than lipid rafts, they can bind host receptors and sometimes disrupt raft composition and gain entry. Other pathogens can benefit from lipid rafts without ever entering the cell; for example, by getting rid of cholesterol, the bacterial stomach bug Helicobacter pylori can bypass the immune response in intestinal macrophages.