Research can be a powerful motivator for change; it can expose health risks in communities or lead to new treatment standards for illnesses. These summaries, linked by the power of research to inspire change, highlight studies that reveal health risks associated with e-cigarette use and permanent hair dye and chemical hair straighteners, efforts to better understand aging in both dogs and people and a life-saving recommendation for treating children with relapsed B-acute lymphoblastic leukemia. 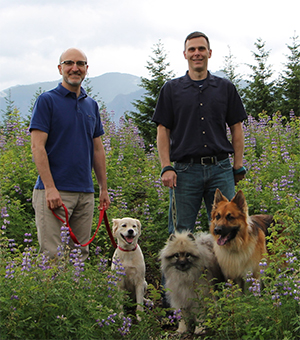 Do age research with your dog

With the help of tens of thousands of dogs and their owners, researchers are embarking on a study about how genes, lifestyle, and environment influence aging. The Dog Aging Project, supported by a grant from the National Institute on Aging, is in the first phase of its project journey. Dog lovers based in the U.S. are invited to nominate their pet for the project. They’ll become citizen scientists by reporting back to researchers about their dog’s health. Researchers hope that dogs will provide insights about how to address challenges of aging for both pets and people.

Study: E-cigarettes are a risk factor for respiratory disease

A study by researchers at the University of California, San Francisco Center for Tobacco Control Research and Education concluded that “use of e-cigarettes is an independent risk factor for respiratory disease,” defined as chronic obstructive pulmonary disease, chronic bronchitis, emphysema or asthma. In the study, recently published in the American Journal of Preventive Medicine, researchers conducted a longitudinal analysis of the adult Population Assessment of Tobacco and Health. The study followed adults who did not have any reported lung disease and reviewed their subsequent e-cigarette use for two years (baseline plus two years of follow-up), Jason Alvarez at UCSF explained in a press release. “Though current and former e-cigarette users were 1.3 times more likely to develop chronic lung disease, tobacco smokers increased their risk by a factor of 2.6”, he said. Researchers also found that people who followed the most common pattern of use, continuing to smoke combusted tobacco products while using e-cigarettes, had an even higher risk of developing a respiratory disease than those who used either product alone. For more on e-cigarettes, see below.

According to a press release from the NIH, a study published in the International Journal of Cancer found that women who use permanent hair dye and chemical hair straighteners have an increased risk of developing breast cancer. The paper’s abstract states: “We observed a higher breast cancer risk associated with any straightener use and personal use of permanent dye, especially among black women.” The researchers reported that “permanent dye use was associated with 45% higher breast cancer risk in black women … and 7% higher risk in white women.” The study used data collected by the National Institute of Environmental Health Sciences’ Sister Study, which tracks the health of more than 50,000 women from the U.S. and Puerto Rico with a sister who had breast cancer.

According to the National Cancer Institute, acute lymphoblastic leukemia is the most common cancer diagnosed in children. At the American Society of Hematology, or ASH, annual meeting, researchers reported that blinatumomab, an immunotherapy drug, yielded such positive results during a clinical trial that it supports blinatumomab as a new standard of care in the course of treating children who are diagnosed with relapsed B-cell acute lymphoblastic leukemia, known as B-ALL. A press release from ASH explains that during the clinical trial, which was led by the Children’s Oncology Group, part of the National Cancer Institute, pediatric patients who received two months of blinatumomab therapy following one month of standard chemotherapy treatment showed a significantly higher rate of disease-free survival and ability to proceed to a bone marrow transplant than those who received two additional months of chemotherapy.

The 2019 National Youth Tobacco Survey, or NYTS, which is conducted annually by the U.S. Centers for Disease Control and Prevention and the U.S. Food and Drug Administration, showed that 5.3 million U.S. middle and high school students had used e-cigarettes in the past 30 days. According to the CDC, this is the sixth year in a row that e-cigarettes were the most commonly used tobacco product reported in the NYTS. One of the components measured by the NYTS is knowledge and attitudes regarding tobacco use. The 2019 survey found that students who reported trying e-cigarettes cited these as the three top reasons for use: “‘I was curious about them’ (55.3%), ‘friend or family member used them’ (30.8%), and ‘they are available in flavors, such as mint, candy, fruit, or chocolate’ (22.4%). In December, the federal minimum age to purchase tobacco products was raised from 18 to 21. Less than two weeks later, the FDA announced an enforcement policy that stops companies from producing and selling flavored, cartridge-based e-cigarettes that appeal to minors. Flavors such as fruit and mint will be prohibited, but tobacco and menthol flavored e-cigarettes will still be available. Cartridge-based e-cigarettes are just one type of electronic nicotine delivery system, or ENDS. The Jan. 2 FDA press release announcing the enforcement policy stated that the FDA will not be prioritizing enforcement against other flavored ENDS products. 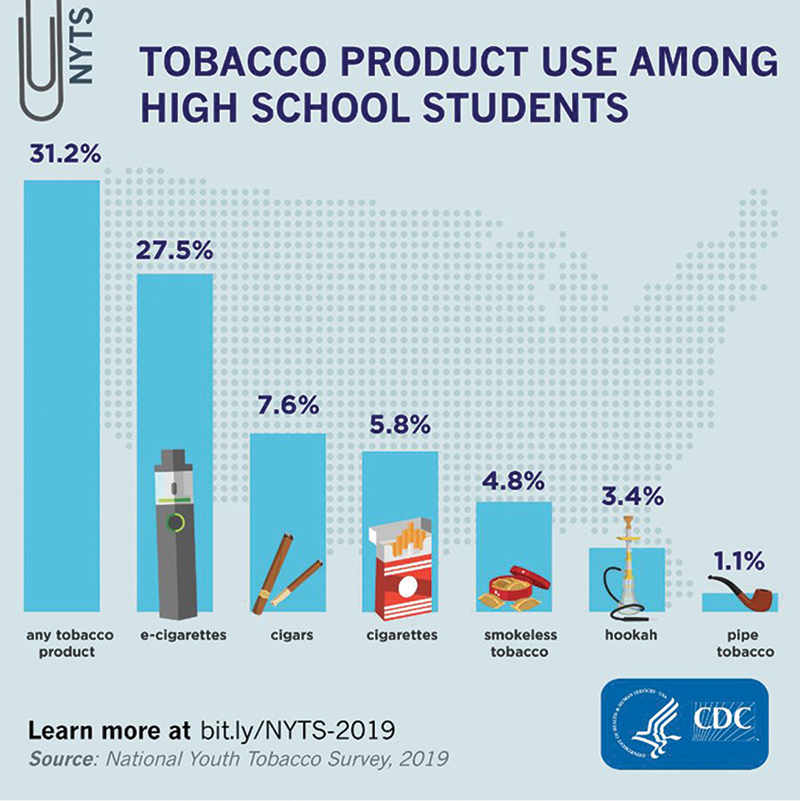 Courtesy of the U.S. Centers for Disease Control and Prevention
This bar chart depicts 2019 tobacco product use among high school students.