He's a new associate editor for the Journal of Biological Chemistry 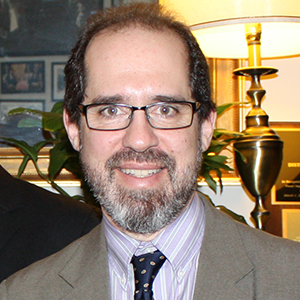 Henrik Dohlman, a professor at the University of North Carolina at Chapel Hill, recently became an associate editor for The Journal of Biological Chemistry. This is a partial transcript of a podcast in which John Kyriakis, a longtime associate editor of the JBC, interviewed Dohlman about his research, his role at the journal and his predictions for the field of biochemistry. The interview has been edited for length, clarity and style. Click here to see a transcript of the entire interview and to listen to the podcast. You’ve been studying yeast for a while. What is the work that you’re currently doing?

A: The process that we’re interested in, desensitization, is characteristic of signaling pathways that respond to hormones, neurotransmitters, drugs — including drugs of abuse — and environmental signals like odors and light. These are all mediated by G-proteincoupled receptors, or GPCRs.

You started out in (2012 Nobel laureate Robert J.) Lefkowitz’s lab many years ago.

A: I was a grad student at Duke (University) in the Lefkowitz Lab in the ’80s. I actually started off as a chemistry major, and I decided to switch to biochemistry for grad school. I sort of came to the realization in college that most of the great discoveries in chemistry were made before I was born, and while this was in the early days of molecular biology, I figured that’s where the action was going to be in the future. So I switched to biochemistry. I went to grad school at Duke. I ended up in the lab of Bob Lefkowitz, who was and remains one of the leading figures in the GPCR field.

In those days, there was a big effort in the lab to purify and clone the β2-adrenergic receptor. That’s the receptor for epinephrine or adrenaline, and that was one of the first GPCRs to be cloned, and it was the early days of molecular pharmacology. People for the first time had a sense of what these things look like, and you could study them in isolation … (I)t was a very exciting time to be in that laboratory. It was actually in that lab that I got interested in this question of feedback regulation … I got interested in looking at this, taking a genetic approach, and that’s actually how I ended up working with yeast, which is a great system for doing genetics.

Now, where did you do your postdoc?

A: So I got interested in yeast, and so I was looking around for a yeast lab, and I ended up working at (the University of California, Berkeley) with Jeremy Thorner. I picked Jeremy’s lab because, of course, it was a leading yeast lab, and Jeremy’s background was actually in biochemistry …

I was interested in identifying genes that might be involved in desensitization of the GPCRs in yeast. This was in the days before knockout mice. (It) didn’t ever occur to me to do this in an animal cell, but I got interested in trying to find desensitization factors in yeast, looking at them genetically and then integrating that with some biochemistry.

I know often people come on these career choices after some sort of revelation or something happens where suddenly something clicks or it’s sort of a slow kind of a realization. What was the situation for you?

A: I would say that being a scientist is in my genes. My father and my grandfather were both academic researchers … My grandfather had done some pioneering work with the Nobel laureate Robert Bárány in Sweden in the 1920s. They were looking at the connection between the inner ear and balance, and he continued to do bench work well into his 70s and 80s. My father is 91, and he continues to have an active research program … And even my brother had done some influential work in the field of immunology, so I was just sort of surrounded by it growing up, and these were my role models. And actually, come to think of it, my other grandfather, he grew up upstairs from his father’s brewery back in Sweden, and so I guess you could say that working with yeast is also in my genes.

The other great use for yeast. So how has the experience (as a JBC associate editor) been so far?

A: It’s actually been very interesting to … peek behind the curtains and see how the journal operates. And so far, it’s been very seamless. The JBC has a great support staff, as you know, and they have been very patient with me as I learn the system. It’s been a very interesting process.

So you’re happy that you were picked to do this? Did you think it would be a fun time or — ?

A: Absolutely. The JBC is the flagship journal of the society … I’ve long been a big fan of the journal. I like the fact that it’s run by a scientific society. It’s a democratic operation. It’s a journal of the people, by the people, for the people. It exists to serve the research community, and that’s very appealing to me. The other thing I like about JBC is it has a great history. It’s been around for more than a century, and yet it’s been the real innovator in Web-based submissions and reviewing and digital publishing and digital archiving. I imagine that was a pretty risky move for the journal, and maybe it wouldn’t have happened if it was a for-profit operation, but these are innovations ...  they’ve accelerated the time to review and to publish articles, and so that speeds up the dissemination of knowledge.

Where do you think the field of biochemistry is going?

A: The sequencing of the human genome, which (was) more than a decade ago, in many ways that was a relatively easy task scientifically, technically, compared to where we are now, where we’re trying to figure out what all of those genes encode and how those proteins encoded by the genome are alternatively spliced, and then when the proteins are made, how they’re modified and how they figure out where to go in the cell and whom to associate with in the cell.

All these questions of protein expression and localization, modification and regulation, sorting out their functions, and how they are dynamically regulated — these are the challenges that are going to keep us occupied for the next century. I think this is a very exciting time to be a biochemist.

Yeast becomes a way … to bridge between the single molecule, in-depth, insightful work and the overwhelming mountains of genomic or structural data that are coming down the line. So that’s what you’re seeing now, or that’s where your vision for your particular field is?

A: So the yeast community is getting access to these databases and these new technologies ahead of most other systems … And, of course, the technology, if it can be worked out in a simple system like yeast … will guide how more complex systems are analyzed.

For example, the Yeast Genome Sequencing Project: That was done in the mid-’90s. (T)hat’s a situation where there are very few introns, and it’s very easy to figure out where they are. But even then, it was a huge task to annotate the information that was emerging from that effort and then all of the other things that were related to that — all these microarray studies and these proteomic studies.

The yeast community has been really proactive in developing bioinformatics tools that have made my life as a researcher much easier, and they have guided similar efforts in other systems, in other model organisms, everything from flies and nematodes to mice and humans.

We also have lives outside the lab. Is there anything that you do for fun?

A: I really like my job, and it’s sort of what I think about when I go home. I’m embarrassed to say that I live a pretty, pretty narrow existence. I jog every morning, and I like to travel and go on hikes. I’m close to my family, and I feel like I have a great life, but science is a big part of it. So I would say science is not only my job, but it’s my hobby, and if that sounds really geeky, that’s —

No, it doesn’t. I think, actually, in this day and age, it’s got to be both, given the difficulties that the community is facing. If you’re going to be doing it in the academic world, it’s got to be 24/7. You have to really love it because, you know, with all the walls that they’re putting up, if that becomes more of a burden than actually doing the science, then what’s the point?

A: There are a lot of challenges to being a scientist today. There’s no doubt about it, and funding is a big one. But to be successful as a scientist, my experiments will fail; my papers will get rejected; my grants will get turned down. And all you do is come in the next day, and you have this hope that the experiment will work and the paper will get resubmitted and accepted and your grant will get funded.

You hear a lot of complaining in labs. People are whining that their experiment didn’t work or something didn’t happen, but I think scientists are the most optimistic people to just come back, as you say … And it’s just sort of a tremendous privilege to be able to do this.

A: If I had to pick one word to describe my existence, it’s “privileged.” I feel so lucky to have this job and to be able to do what I do and to look forward to coming into the lab in the morning. There are a lot of people who cannot say that about their jobs, and I feel really lucky that I’m one of the people that can. And I wish for nothing less for my students and my children. I’m at the point in my career now where I learn as much from my students as they learn from me, and that contributes a lot to my enjoyment of this job.

John M. Kyriakis was an associate editor for the Journal of Biological Chemsitry when he wrote this article.