Whenever we get injured, our immune systems come to our rescue via the inflammatory response. While redness and swelling around a cut might cause discomfort, the coordinated response of immune cells — orchestrated by inflammation-promoting signals like cytokines and prostaglandins — defends our bodies from foreign bacteria and viruses. 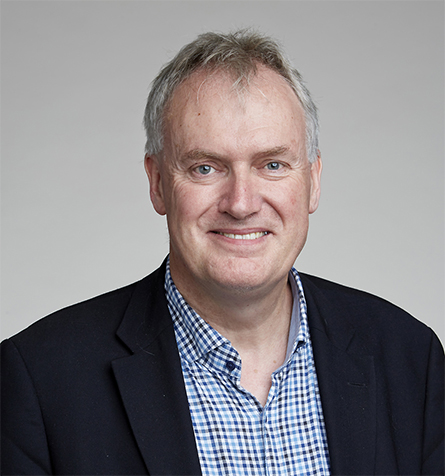 Luke O’Neill, a professor in the School of Biochemistry and Immunology at Trinity College Dublin, has been exploring the molecular and genetic underpinnings of inflammation and the innate immune system for over three decades. More recently, he’s begun investigating the roles of metabolic pathways in immune-cell activity — a research area known as immunometabolism.

He also has been examining inflammation’s unexpected potential role in causing human diseases like Alzheimer’s, Parkinson’s and sepsis. O’Neill has co-founded companies that are working to translate his research findings into possible drug treatments for these and other diseases.

His lab also is tackling the novel coronavirus. His group has started a few projects on COVID-19, such as testing out anti-inflammatory drugs on macrophages. These white blood cells contribute to excessive inflammation that has caused severe illness and death in infected patients.

In addition to his scientific work — which has led to numerous accolades and election as a fellow of the Royal Society in 2016 — O’Neill is a devoted science communicator. He’s written two general science books, “Humanology” and “The Great Irish Science Book,” with a third book on the way. He’s also been on radio and television programs, answering questions about the novel coronavirus and teaching people about how to protect themselves.

O’Neill is even the occasional front man for the Metabollix, a band composed of doctors and scientists. They play cover versions of old favorites and have performed at scientific conferences including a few Keystone Symposia.

I spoke with O’Neill, a former associate editor for the Journal of Biological Chemistry, to learn more about his scientific journey and his thoughts on COVID-19. The interview has been edited for length and clarity.

Q: What’s it been like as an immunologist during the COVID-19 pandemic?

I became aware of it back in early January, but we never thought it was going to explode into this massive thing. We thought it might be like SARS at worst, which was contained very quickly. And then it began to grow and grow. When you’re an immunologist, everybody’s asking you about it. Suddenly, I’m on the radio and the TV talking about it.

My lab works on inflammation and cytokines, but I went to a conference back in January with some SARS people, just by coincidence. About six week later, I was contacted by a collaborator, and I began to think about experiments. As an immunologist who works on inflammation and cytokines, this is front and center to what we do. We’ve been studying the anti-inflammatory effects of a metabolite called itaconate.

Q: How does inflammation fit in with COVID-19?

I’ve had a long interest in septic shock. We’ve known for 50 years that you get a massive inflammatory reaction during sepsis. Macrophages get activated, cytokines get made and you get multiorgan systemic inflammation.

When COVID-19 emerged, it was very clear it was like other viruses that affect the airways: It would cause an inflammatory reaction in the lungs. All the things I work on were found in the lungs of COVID-19 patients: cytokines like IL-1 and IL-6, macrophage infiltration. When you die of COVID-19, what you’re dying of effectively is a sepsis-type scenario, where you get a multiorgan inflammatory reaction in the body. 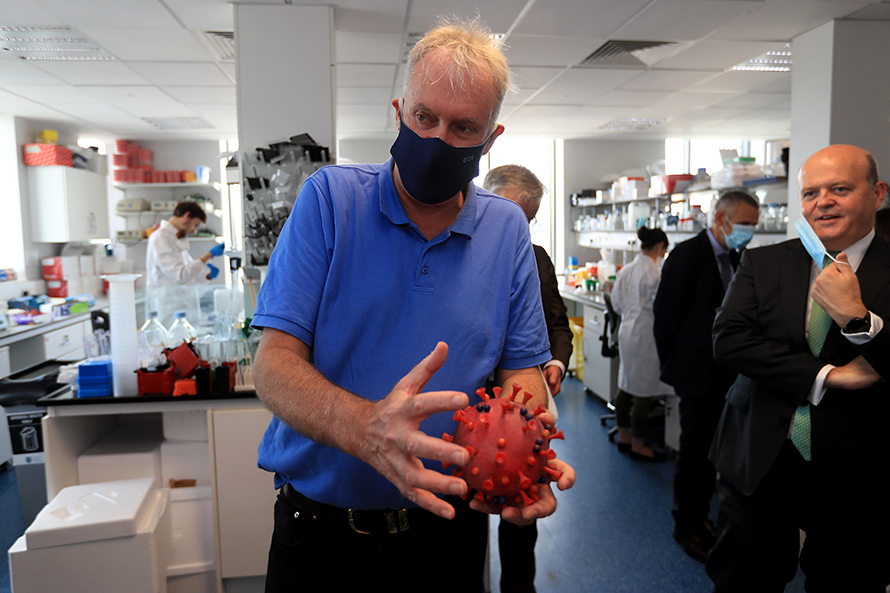 Trinity College Dublin
Luke O’Neill holds a model coronavirus in his lab in the Trinity Biomedical Sciences Institute in Dublin on the day in early July when the government awarded 5 million euros to support the institute's research into COVID-19.

Q: Taking a step back, what got you into this area of study in the first place?

Do you mean years ago? We’ve got to go back to the Dark Ages. (Laughs.)

I got more and more biochemical and began to work on the mechanisms of signaling and receptors. And then I got into transcription factors and Toll-like receptors. My whole scientific focus has been trying to get the underlying mechanisms in inflammation.

Recently, we’ve been working on metabolism, because you get a strange metabolic shift during inflammation as well. Macrophages begin to ramp up glycolysis, for instance.

It’s like one big puzzle. What are the component parts? What are they doing? How can they go wrong? It’s been always a journey toward understanding mechanism.

Q: I’ve seen that some of your research has spun off into companies. What’s that been like?

It’s tremendous because they’ve taken our discoveries and they’re trying to turn them into medicines.

Q: What are you looking forward to in the inflammation and immunology fields?

All these years of effort — not just my lab, of course, thousands of people — we’re all trying to discover ways to treat these diseases. We work on Parkinson’s, Alzheimer’s and sepsis. Even with rheumatoid arthritis, where there are treatments, there’s a big need for new anti-inflammatories that work better.

With COVID-19, we want to see treatments. There are trials happening with anti-inflammatories, so I’m waiting with bated breath to see what those trials tell us. There are also anti-virals, vaccines, antibody-based therapy. If a single one of those things works, the game changes because now there’s hope. 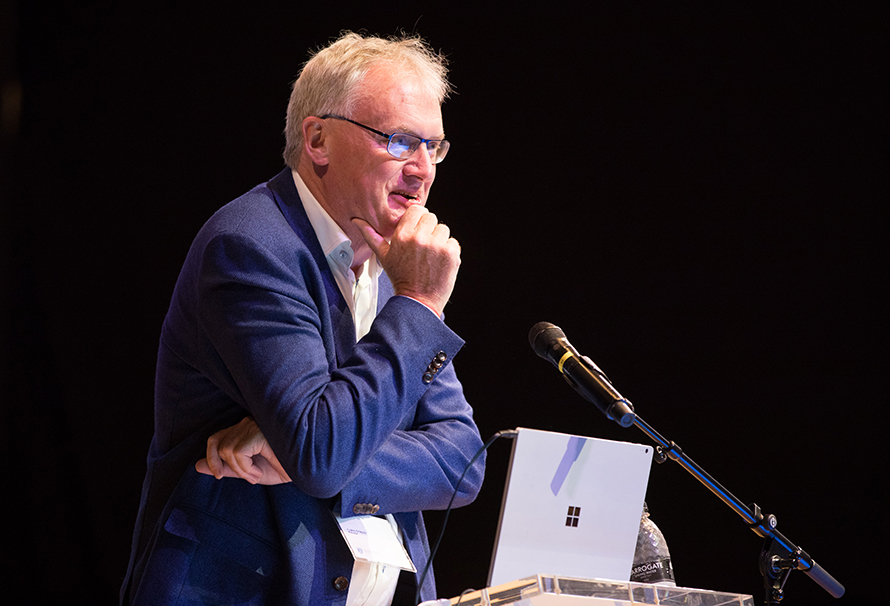 Q: You’re also heavily involved in science communication. What inspired you to write “Humanology” and “The Great Irish Science Book”?

I’d be asked questions on Irish radio, and it began with immunology stuff I know about. But then the radio hosts go, “Oh, can you comment on this?” And that might be slightly outside my comfort zone. But then they said, “Oh, you’re quite good at this” — so I began to get roped into it more and more and got to enjoy it. It’s a bit of a thrill.

Then a publisher said, “You want to do a book based on your radio stuff?” They encouraged me, and I wrote “Humanology” about the scientific basis for what it is to be human. And then they said, “Do you want to do a book for kids?” Because there was a gap in the Irish market. There are loads of general science books for kids, of course, but there wasn’t a specifically Irish one. In “The Great Irish Science Book,” I give examples from Ireland: Geology will be Irish rock, say. And I give examples of Irish scientists, like chemist Robert Boyle; mathematician William Rowan Hamilton; and biologist William Campbell, who won the 2015 Nobel Prize in chemistry for the anti-parasite drug ivermectin.

Q: Back to the pandemic: Will we eventually get out of this?

In Ireland, there’s been great compliance with the lockdown and a gradual reopening. And, remember, we escaped every other pandemic. We got AIDS under control, the swine flu went away, the Black Death went away eventually. So the history of infectious diseases tells us that humans do get over it. Because of modern medicine, we can get over this. It’s just a question of what’s going to work.

There are loads of things happening: As of June, there’s something like 120 vaccines in development now, maybe 10 in humans as we speak. There are anti-virals, anti-inflammatories, and antibodies as a therapy as well. So I’m optimistic because there are so many shots on goal.