She's an associate editor for the Journal of Biological Chemistry

Ruma V. Banerjee, a professor of biological chemistry at the University of Michigan, joined the ranks of The Journal of Biological Chemistry associate editors earlier this year. In December, along with colleague and JBC Associate Editor William Smith, Banerjee oversaw a JBC minireview series on redox sensing and regulation. Here she offers some insights on her work at her home institution and with the journal. 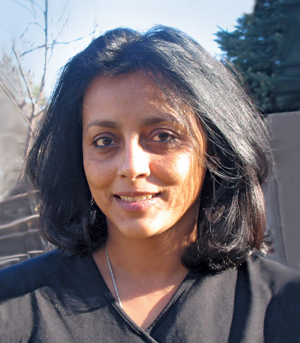 My research focuses on deciphering the molecular traffic lights that regulate the flow of sulfur. Sulfur metabolism furnishes cells with their favorite methyl donor SAM, or S-adenosylmethionine, as well as the antioxidant glutathione, the gaseous signaling molecule H2S, and taurine, an abundant amino acid. We are particularly interested in how key traffic junctions are policed by enzymes that use B vitamins — B12, B6, folate — as cofactors and the metabolic diseases that result from their impairment. These enzymes in turn play critical roles in regulating cellular methylation and redox homeostasis. We are also interested in how an intracellular relay system traffics B12, a rare but essential cofactor, using proteins that work as enzymes and as escorts, dressing up the vitamin into its biologically active forms and delivering it to its target enzymes.

I grew up in India as an army brat, changing 10 schools before graduating at the age of 14. Although I was very interested in physics as a high school student, I chose biology in college and obtained my bachelor’s and master’s degrees in botany from Delhi University. I moved to the U.S. for graduate school and studied with Jim Coward, a medicinal chemist, then at Rensselaer Polytechnic Institute in New York. In my first week at RPI in Jim’s class, I had my first encounter of the biocatalysis kind and was hooked! My formal training is in mechanistic enzymology with an emphasis on enzymes that use coenzymes — B12, B6, folates and heme — to broaden their catalytic and regulatory repertoires. My program has broadened to include cell and animal studies to interrogate cell-cell redox communication in the adaptive immune system.

And with whom did you train as a postdoc, and what was your work like there?

I trained at the University of Michigan with Rowena Matthews. It was in her laboratory that I moved from synthetic chemistry to molecular biology and biophysical studies on proteins. Michigan has always been a haven for enzymology, and the late ’80s were a very stimulating time with the labs of Vince Massey, Charles Williams, Martha Ludwig, Dave Ballou and Rowena Matthews converging at weekly meetings over beer to discuss speedy enzymes!

Did anything occur — in a milestone sort of way — that made you choose science as a career?

I think I never lost the curiosity that children are naturally born with about nature and knew at an early age that I would be a scientist — but not the particular flavor. I remember meeting an aunt at the age of 12 on winter break in India from her graduate program in Boston, where she was training with Lynn Margulis. I found her enthusiasm for science to be infectious and thought it would cool to live the excitement that she felt about her work.

During grad school and/or your postdoc, did something especially impress you to choose the path you’ve blazed in research?

I trained with very smart and successful people who seemed to have found the secret to work-life balance. So the ability to have one’s cake and eat it too, as embodied by my mentors, was an important early lesson in navigation for me. In terms of science, I was enticed by the interface between molecular and clinical research, and ever since my graduate student days I have belonged to a community where the conversation is between clinicians and basic scientists. For me, this interface has the headiness of fundamental discovery balanced by the sobriety of knowing of lives affected by disease. Over the years, I have been contacted by parents and relatives of individuals affected by inborn errors of metabolism affecting enzymes that I study. I am eager to help with providing information and samples in an effort to accelerate the pace of finding cures. That this community even follows my work is always a surprise to me.

I was surprised to be asked since I had no previous association with the editorial board of JBC. I am almost a month into the job now and really enjoy it. It provides early glimpses into developing stories and allows one to help shape them into stories well told. So it’s a chance to learn from and to contribute to the community.

The start of my independent career coincided with having my first child and then, three years later and still as an assistant professor, my second one. So over the years, my hobbies have been relegated to various degrees of backburner status. I enjoy theatre, reading (Murakami is my favorite author), yoga/meditation, writing and painting (watercolors).