Bankaitis a ‘tour de force’ in the field of lipid biology

Vytas Bankaitis, a distinguished professor at the Texas A&M University College of Medicine, has been awarded the Avanti Award in Lipids by the American Society for Biochemistry and Molecular Biology. He is being recognized for his work on elucidating the role of lipid transfer and phosphatidylinositol exchange proteins in cell biology. 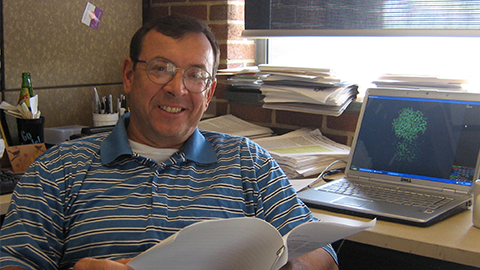 “I am deeply honored to be recognized as recipient of the Avanti Award in Lipids. This award belongs to the talented and dedicated students, postdoctoral fellows and technicians who drove our research over the years. I stand on their shoulders. It also serves as testimony to my mentors and insightful colleagues, and to the lipid community who embraced our science, that their interest and investment was worthwhile. I thank them all.” — Vytas Bankaitis

Arthur Johnson, also of Texas A&M, wrote in his letter supporting the award nomination that Bankaitis’ contributions to the field of lipid science “have profoundly influenced our understanding of the importance of lipids to so many areas.”

For 25 years, Bankaitis and his laboratory have focused on the regulation and organization of lipid signaling in eukaryotic cells. His laboratory described the first biological function for what had previously been a functionally enigmatic group of proteins, the phosphatidylinositol transfer proteins, called PITPs. These proteins bind and exchange specific phospholipids, the phosphatidylinositols, between membranes in vitro. His early research described an important and novel link between lipid metabolism and cellular trafficking when he discovered that a yeast protein called Sec14 had PITP activity. This launched a new research area at the interface of vesicle trafficking and lipid metabolism. He discovered that vesicle trafficking is, in fact, dependent on lipids, and he went on to elucidate the structure and mechanism of Sec14.

Bankaitis’ recent research indicates that PITPs are crucial for coordinating the interfaces of lipid-driven metabolic reactions and intracellular signaling. In this way, PITPs act as highly regulated coordinators of phosphatidylinositol kinase signaling in eukaryotic cells, which channels lipid kinase activities toward specific biological outcomes. When the interfaces are regulated inappropriately, it can affect membrane trafficking, growth factor receptors, cell growth and developmental pathways.

William Dowhan of the McGovern Medical School at the University of Texas Health Science Center at Houston wrote in his nomination letter that Bankaitis’ recent research is entirely novel and “is reshaping how we think about the regulation, physical organization, and diversification of lipid signaling, and it promises to rewrite the textbooks” on these subjects.

Of Bankaitis’ collective research contributions to the field of lipid science, Johnson wrote that his “creative, thorough, and comprehensive elucidation of the structure and function of PITPs and of their integration into the metabolic signaling pathways of the cell constitutes a tour de force.”

Bankaitis will receive his award at the ASBMB annual meeting during the Experimental Biology 2019 conference in Orlando, where he will deliver an award lecture titled “Instructive regulation of phosphoinositide signaling by lipid transfer proteins” at 1:45 p.m. April 7 in Valencia Ballroom A at the Orange County Convention Center.