When Anne-Claude Gingras was working on her Ph.D. in Nahum Sonenberg’s lab at McGill University, she focused on the regulation of the protein synthesis machinery by phosphorylation. Her thesis described the role of the mechanistic target of rapamycin complex in phosphorylating a translational inhibitor. 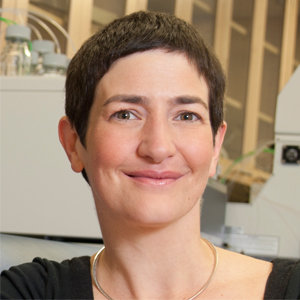 Curious about the unexplored protein phosphatase components of phosphoregulation, Gingras realized that then-emerging proteomics technologies would be key to solving this puzzle. She moved to Seattle to study mass spectrometry with Ruedi Aebersold, and there she improved methods for protein–protein interaction detection. She started her own research group in late 2005.

Gingras now runs a signal transduction, systems biology and proteomics lab at the Lunenfeld–Tanenbaum Research Institute in Toronto. Her team works to improve experimental and computational approaches for interaction proteomics. Misregulation of protein phosphorylation is implicated in numerous diseases, including cancer and diabetes, so she applies these techniques to identify and understand new components of signaling pathways related to these pathologies. More recently, she began systematically applying the proximity-dependent biotinylation approach BioID to study the composition and organization of membraneless organelles and, ultimately, of human cells.

Her group’s success in defining new biological complexes and pathways implicated in disease heavily relies on the contributions of talented students, fellows and research assistants with diverse expertise in biochemistry, cell biology, mass spectrometry and bioinformatics, as well as a large network of key scientific collaborators.

Her Ph.D. and postdoc advisors shaped not only her scientific directions but also how she interacts with other scientists, Gingras said. She is committed to sharing data, methods, reagents and protocols and to helping other scientists realize their objectives. Her motto, she said, is “Science works much faster when you help one another.”

To determine where proteins are in a cell, Anne-Claude Gingras’ group uses mass spectrometry as a high-resolution discovery-based microscope. They employ a technique known as BioID that reports on the proximity of a protein to another used as bait.

Her student Christopher Go created 200 stable cell lines that each express one organelle marker as a probe and performed proximity-dependent biotinylation to identify the composition of each organelle. Research associate James Knight then developed computational tools to analyze and visualize the data. This project revealed new addresses for many unexplored proteins and showed proteins that are at contact interfaces between organelles. The resulting paper has been published as a preprint in bioRxiv.

Using this work as a reference map, others in the Gingras lab are creating sensors to report on proteomic changes in an organelle after perturbations such as drug treatment, various growth conditions and genetic modulation with CRISPR. In profiling the surface of the lysosome, postdoctoral fellow Geoffrey Hesketh found a new pathway that activates the mechanistic target of rapamycin complex by extracellular protein through the process of macropinocytosis. This work has implications for disease in which macropinocytosis is activated, such as Ras-dependent cancers.