August has been an ‘unselfish proponent of access to STEM careers’

Updated 5/26/16 to include lecture video

August has been an ‘unselfish proponent of access to STEM careers’ 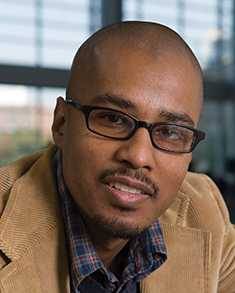 “Ruth Kirschstein was a huge advocate for diversity at the National Institutes of Health. So to be considered even worthy of being considered in that company is just a huge honor for me.”

Avery August, professor of immunology and chair of the department of microbiology and immunology at the Cornell University College of Veterinary Medicine, won the 2016 Ruth Kirschstein Diversity in Science Award for his advocacy and mentoring of underrepresented minorities in the sciences.

The award honors outstanding scientists who are committed to helping underrepresented minorities enter the scientific enterprise and thrive within it. August was selected as this year’s winner by the American Society for Biochemistry and Molecular Biology’s Minority Affairs Committee.

Throughout his career, August has been an advocate for underrepresented minorities. He established the Bridges to the Doctorate Program at Pennsylvania State University. Funded by the National Institutes of Health, the program helps students from Alcorn State, a historically black college, matriculate into doctoral programs at Penn State. August also obtained funding from the Alfred P. Sloan Foundation’s Minority Ph.D. Program to recognize Cornell as a Sloan University Center of Exemplary Mentoring. The MPHD program supports students who self-identify as African-American, Hispanic or American Indian/Alaska Native and are pursuing doctorates in engineering, the physical and natural sciences, or mathematics. August’s mentorship achievements at Cornell extend to the university’s Broadened Experiences in Scientific Training program. As a primary investigator for BEST, Avery researches ways for graduate students and postdoctoral fellows to get experiences that will prepare them for career opportunities beyond traditional positions in academia.

August says he wants to create an easier path for the next generation of underrepresented minorities in science. “I’ve been really, really lucky … to have gotten help from people who came before me … Seeing the paucity of scientists of color in meetings, in the academy, in the industry … that really drives me,” he says.

When August was 16 years old, he immigrated to Los Angeles from Belize with his mother and siblings. He says he soon was bored at his L.A. high school and didn’t want to wait to study more advanced material. Against a school counselor’s advice, August dropped out of high school in his junior year and took and passed the General Education Development tests. He went on to community college and later earned a bachelor’s degree in medical technology at California State University, Los Angeles. This was followed by a Ph.D. in immunology from Weill Cornell Graduate School of Medical Sciences. He was a distinguished professor of immunology and director of the Center for Molecular Immunology and Infectious Disease at Penn State before accepting his current position at Cornell.

August says he keeps a framed copy of his GED in his office because it represents the start of his academic journey and is a reminder that he didn’t let someone else’s opinion stop him from paving his own road to success.

August’s honors include plenary lectureships at the Annual Biomedical Research Conference for Minority Students in 2005 and 2014 and the 2014 E. E. Just Lecture Award from the American Society for Cell Biology, which recognizes outstanding scientific achievement by a minority scientist.

In his letter nominating August for this award, Squire Booker, of Penn State, says, “(August) is an outstanding biochemist/molecular biologist, an outstanding teacher and mentor, an outstanding leader, and an unselfish proponent of access to STEM careers by underrepresented minorities.”

By studying immune system cells and the enzymes that control the activation of these cells, August seeks to understand how the immune system takes on invading infections and allergens, how allergies and asthma develop, and how symptoms can be reduced or prevented. His team already has found that when specific enzymes, Tec family tyrosine kinases, are targeted in mice, the mice do not develop asthma or allergies.