DeLauro and Moran recognized for their support of science 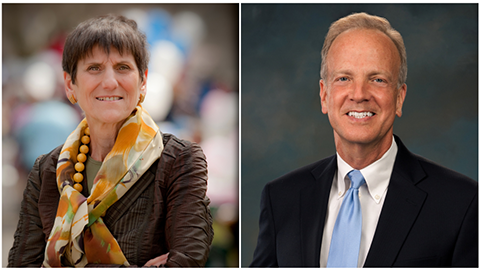 "Dr. Schachman has dedicated his professional life to educating generations of scientists, and I am honored to receive this award named after him. As a cancer survivor, I know the importance of biomedical research, and I am in awe of what our scientists do. The scientific and medical breakthroughs supported by NIH have allowed millions of Americans to live happier, healthier and longer lives. This award is inspiration to keep fighting for funding so we can ensure those breakthroughs keep happening for years to come" — U.S. REP. ROSA DELAURO, D-CONN.

"It is an honor to receive the Howard K. Schachman Public Service Award. By supporting biomedical research, we are saving lives today and investing in our future. Given the vast amount of progress made over the last century and the great potential current research holds, now is not the time for our nation to waiver on its commitment to advancing medical research. This dedication will benefit our children and our country for generations to come by saving lives, improving health, growing the economy, reducing health care costs and strengthening America’s role as a global leader in innovation."
— U.S. SEN. JERRY MORAN, R-KAN.

Howard K. Schachman served as the PAAC chair for more than 10 years. Shortly thereafter, in 2001, the committee instituted the Schachman Award, which recognizes up to two individuals each year for their dedication to public service in support of biomedical science.

DeLauro has spent 25 years representing the people of Connecticut’s 4th District in the U.S. House of Representatives. During that time, she has been a champion of biomedical research and has introduced numerous bills in support of the enterprise. Most recently, DeLauro co-sponsored the Accelerating Biomedical Research Act, which would restore the National Institutes of Health’s purchasing power.

Thomas D. Pollard at Yale University, a constituent of DeLauro, said, “I am blessed to be represented in Congress by Rosa DeLauro, a fellow cancer survivor, who is more enthusiastic about the value of basic biomedical research than anyone else at the national level. She appreciates that fundamental knowledge about biological systems is required to understand human disease well enough to develop rational strategies for prevention and cures. She also appreciates that getting this information depends on hard work and a long-term investment by the federal government working with our educational and research institutions.”

Moran represented Kansas’ 1st Congressional District for 14 years before his election to the U.S. Senate in 2010. He has championed legislation to prioritize research at the NIH and spoken about the importance of biomedical research on the Senate floor and in multiple news publications.

“During his time in the Senate, Sen. Moran has been a consistent and vocal booster not only of the NIH but of education in the sciences. Whether speaking to the citizens of Kansas or his colleagues in the Senate, Sen. Moran has argued repeatedly that tax dollars spent on the NIH are a wisely spent investment in the future of America,” said Gerald M. Carlson at the University of Kansas Medical Center and a member of the PAAC. “He realizes that support of scientific research must be nonpartisan, that other countries are spending proportionately more than we are on such research, and that our recent spending on science has been at a standstill.”

Both DeLauro and Moran have been invited to give remarks and receive their awards at a reception after the ASBMB spring Hill Day.