The language gap: Hidden struggles of the non-native speaker 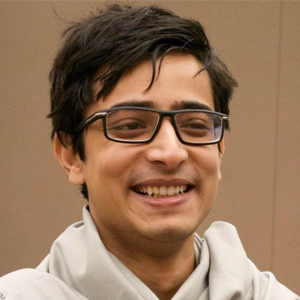 My first experience of education in the U.S. was a two-week English as a second language course at the University of Chicago. There I learned that "clothes" was pronounced "close" and squash is a kind of vegetable. I was told that I use too many redundant words that are hardly necessary (yes, like that). After two weeks, our international cohort was informed that we were good to go. But were we? 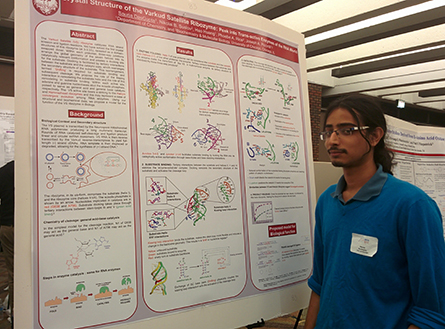 Prakash Shee
The author presents his work at the 2016 Midwest Enzyme Chemistry Conference
in Chicago. After writing his first paper, he found new communication challenges
in sharing his research at a poster session.

Every year, about half a million students travel to the U.S. to study science, technology, engineering and math subjects. An overwhelming majority of these students are non-native speakers of English, the lingua franca of the scientific enterprise. This is the same group that ultimately will comprise half of the country's postdoc pool and one-fourth of the STEM faculty in a few years' time. These favorable outcomes suggest that the system really works for international students, but does it?

Concerns about the gender gap, race gap and wealth gap in STEM have permeated public consciousness in recent years thanks to efforts by universities, funding agencies and scientific bodies, but the language gap for non-native speakers hardly is discussed.

Classes were taught in English in my school back in India, but all my interactions outside those few hours in school were in my mother tongue, Bengali. When I got to the University of Chicago to work on a Ph.D. in chemistry, my adviser's job was to train me in scientific research; I was expected to be proficient in English. In my early years in grad school, I had a hard time penetrating the dense scientific literature I had to read for my research.

When it came time for my first research paper, I realized how difficult scientific writing could be. The research was done, and we were satisfied with our results, but preparing the manuscript took close to a year. Like most Ph.D. students, I had no training in technical writing, so my first draft was a mess. Because English is not my first language, I had a hard time finding the right words to describe my results, and my sentences were awkward and long-winded. My adviser, busy with other priorities, edited the draft heavily. The edited manuscript read better, but I didn't know why. Even when I finally could bask in the glory of my publication — we had discovered the structure of an RNA molecule that also behaves as an enzyme — a nagging inner voice reminded me that the process would be almost as tedious the next time around.

With my paper submitted, I registered for my first scientific conference. While preparing, I soon realized that, unlike writing, my talk would not be edited. In my first poster presentation, my interactions with others were less spontaneous than the American presenters', even after considerable preparation. I have become a more confident speaker since then, but at every conference I attend I meet non-native presenters struggling to convey their hard-earned results.
Student talks rarely last more than 15 minutes, which calls for precise communication. As a listener, I don't know how many times I've given up on a talk because I couldn't understand the speaker's words or I found their monotone soporific. Though I use a script, I aim to write a talk that sounds spontaneous by using short, direct sentences, pausing to emphasize important points and keeping my tone conversational. I also have found that using questions as segues increases audience engagement.

Like most non-native speakers who join the U.S. academic workforce, I was aware of the language gap before I came here. And I don't think the solution lies in critiquing the linguistic hegemony of English over the sciences. It lies in rethinking graduate training.

Universities should offer a semester-long course on science communication to first-year grad students, with special attention to non-native speakers. The writing component should include exercises in summarizing scientific findings or reviewing scientific literature. Students should be introduced to the phrases and terminology commonly used in scientific writing, taught how to synthesize related ideas into concise sentences, and provided with a primer on technical writing. Impromptu group discussions, flash presentations and practice talks could be included in the oral component. Through mutual critique and suggestions, all new grad students soon would gain the confidence to approach scientific communication with excitement instead of unease. 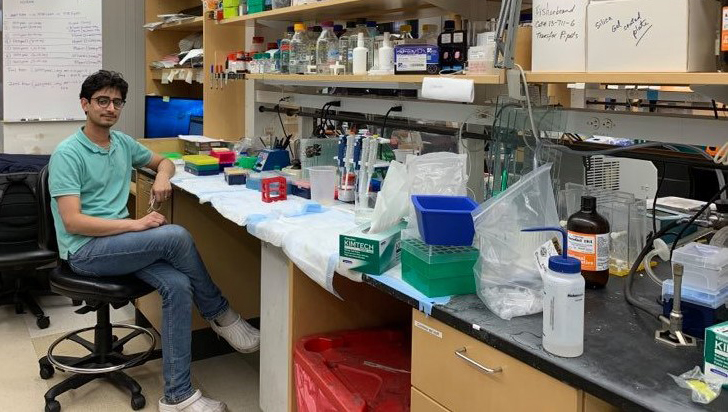 Shui-ying (Fanny) Ng
The author is pictured in 2020 in his lab at Massachusetts General Hospital where he is now a postdoctoral researcher.

Of the six courses I took in graduate school, only two were even remotely related to my Ph.D. work, whereas a communication course would have been useful to the entire entering class, irrespective of their field of research. Such courses probably don't exist because university administrators are unaware of the difficulties I've outlined. After joining a lab, most students have little communication with the department administration. We don't like to complain, so our struggles remain siloed.

From the student's perspective, I can see how fitting such a course into an already packed first year might be difficult. In most schools, including mine, teaching assistant duties take up most of the week. My primary concern in the first year was to find a suitable research group. Busy students may not consider such a course a priority, but I think this initial time investment would pay high dividends in a few years.

A course would be an excellent starting point, but I have found that self-improvement is the only way to level the playing field. A healthy reading habit has done wonders for my language skills. I have benefited especially from science writers such as Richard Dawkins and Paul Davies. When my busy schedule does not permit additional reading, I find that listening to narrative podcasts, even those that have nothing to do with science, is a great way to learn effective sentence construction. I suggest podcasts by the Parcast network as examples of effective storytelling.

Non-native speakers have been and continue to be successful because we power through uncomfortable experiences. That's what learning is. I present my story as an example of countless stories. I believe universities can do much more to empower one of the most productive groups in American science and technology.

Saurja DasGupta is a postdoctoral researcher at Massachusetts General Hospital.