ASBMB Today Careers What is it like to work at the EPA?
Jobs

I’ve never met anyone more enthusiastic about their job than Muna Nahar is about her work at the Environmental Protection Agency. “The mission is just so great!” she told me. “The people are so focused on helping the public.”

I’ve been intrigued by what a scientist’s life in government is like, so I reached out to Nahar to learn about her job. Nahar has worked as a toxicologist at the EPA since earning her Ph.D. from the University of Michigan in Ann Arbor in 2014. That means she’s worked through three presidencies. While things change with each administration, restructuring or emphasizing different aspects, she and her colleagues stay focused on the EPA’s goal — “To protect human health and the environment,” as stated on the agency's website. 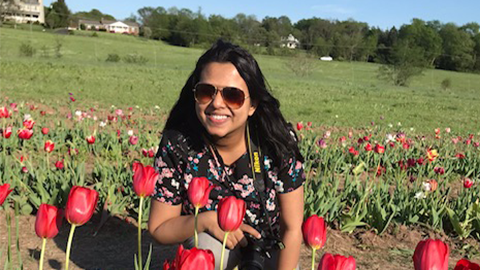 Muna Nahar is a health assessor at U.S. Environmental Protection Agency. "I’m synthesizing all the data to understand the general safety or hazard of a chemical," she said.

Nahar knew during her graduate studies that she didn’t want to stay in academia. “I saw people going down the academic route, and somewhere in my gut I knew that wasn’t my way,” she said.

Her dissertation focused on the developmental toxicity of the endocrine disruptor bisphenol A, commonly known as BPA. She attended toxicology conferences attended by many EPA employees. She said she was very curious about what they were doing: “I had working at the EPA in the back of my mind when I was a student.”

Because her Ph.D. work in toxicology aligned so well with the work going on at the agency, she said, the transition into government was relatively easy. The biggest change was that she wasn’t doing benchwork anymore.

“I haven’t picked up a single pipette in the last eight years,” she said, sounding almost surprised. Her job now consists of bigger-picture work: analyzing and understanding data collected by many other people, companies and organizations. “At first I thought I missed the lab, but actually, looking back on my Ph.D., I realize I always enjoyed reading papers and figuring out what it all means. And that’s what I‘m doing now as a regulatory toxicologist: I’m synthesizing all the data to understand the general safety or hazard of a chemical.”

This synthesis is different from what she did during her Ph.D. in one main way. Back then, she read papers to understand where her own research fit in and to figure out the path her research should take. Now she’s seeking to answer one essential question: Is there enough information to say that a chemical is safe?

To reach the conclusion, she and her team look through data — including peer-reviewed research, compilations of data and systematic reviews from agencies all around the U.S. and the world, and even proprietary data submitted by companies. They look at data for all relevant systems — such as cardiovascular, neurological and respiratory — and data for the life around us too, such aquatic and other wildlife. Often there is limited information about a chemical, so Nahar must use chemical modeling tools and experimental data from analogous or similar compounds to estimate how the chemical works. Then she and her colleagues discuss their findings and come to a conclusion.

She’s had a few different roles at the EPA. Her current job (the job she’s had for longest) is a part of the Safer Choice program. She describes the mission of the program this way: “If you’re going down the grocery aisle, you have so many products, and you're bombarded with all this messaging. Safer Choice is a trusted label that ensures ingredients in the product have been reviewed against strict safety criteria for both human health and the environment, so you don’t have to stress over reading the ingredient list."

Her work looks at the whole product instead of just one or two hot-button chemicals, such as BPA or phthalates, that get a lot of publicity. Her team evaluates all toxicological data for every ingredient to check whether it is safe for your family, pets, workers and the environment. They also require that products meet sustainable packaging and performance standards. If a product meets these stringent standards and criteria, her team can grant it the “Safer Choice” label.

Nahar said the best part of her job is how much she gets to learn, think and build upon her prior knowledge. She gets to use the molecular biology and genetic knowledge she learned as an undergrad working in a yeast genetics lab and toxicology knowledge from her Ph.D. studying the effects of BPA exposure. And she’s been able to acquire more skills, including the use of chemical modeling programs that EPA scientists have created.

“I really like that aspect of my job: It’s neuroscience, and cardiovascular, and aquatic toxicity. In my previous training, I was very focused on human health, and now I also get to know about other things, like fish and ecology. I’ve become more of a generalist,” she said.