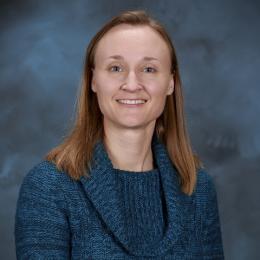 Microorganisms may provide hope that peatlands can withstand hotter temperatures in a changing climate.

Scientists at the Department of Energy’s Oak Ridge National Laboratory discovered that certain bacteria increase the climate resilience of Sphagnum moss, the tiny plant responsible for storing a third of the world’s soil carbon in peat bogs. Heat tolerant microbes transfer that protection to the plants, helping them survive climate warming. 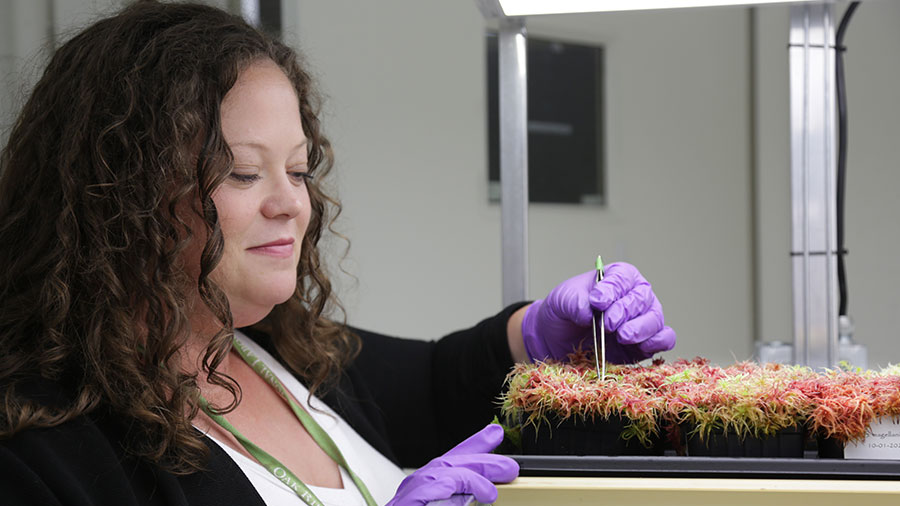 Better understanding the workings of the mutually beneficial partnership, or symbiosis, between moss and microbes could point to new paths for maintaining healthy moss and preserving these vital peatland ecosystems that sequester so much carbon.

“Perhaps everything isn't as dire as we think,” said ORNL’s David Weston, a plant biologist and lead of the recent study. “Maybe organisms are more resilient than we know to these extreme climatic conditions. We're seeing that you can drastically influence an organism's ability to handle these stressful conditions just on its associated microbiome.”

The research team found that hotter temperatures change the composition of the microbial communities, or microbiomes, living in Sphagnum moss. This change in community composition causes Sphagnum to activate certain genes, triggering production of hormones and proteins that are known to confer stress tolerance.

The team demonstrated that heat tolerant microbes, when applied to laboratory moss grown without a microbiome of its own, elicit the same protective response and enable moss to better survive heat waves.

The findings offer a glimmer of hope for the moss and its function in sequestering carbon as temperatures increase. Previous ORNL study results have shown that sections of warmed peat bog in a whole-ecosystem manipulation experiment changed from carbon accumulators into carbon emitters in just three years, releasing carbon dioxide and methane into the atmosphere.

Of mice and moss

When Weston and a multi-institutional team set out to explore whether microbes could transfer desirable characteristics to the moss, they were inspired by an unlikely source: a study of human twins. The twins had different physiques with one twin tending toward obesity and the other lean. When microorganisms from their digestive tracts were transferred to mice that had almost no microbiomes of their own, the mouse with the obese twin’s microbes grew bigger than the other even though both mice ate the same diet. 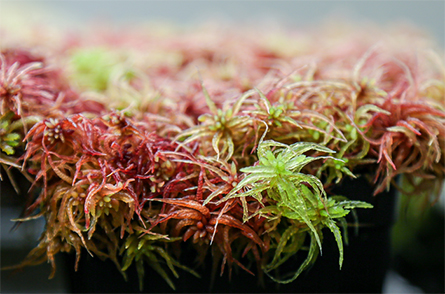 Weston wondered, why can’t we do something similar in plants?

To answer that question, the research team sampled microbes from the DOE Spruce and Peatland Responses Under Changing Environments, or SPRUCE, site in northern Minnesota. SPRUCE is a unique experimental site with a series of large enclosures, measuring 23 feet tall by 43 feet wide, that warm sections of peat bog at five different temperatures and expose them to elevated levels of carbon dioxide. These enclosures allow scientists to measure the effects of potential future climates.

In the warmer enclosures, the microbes are adapted for hotter temperatures and can convey that heat tolerance to the moss. Researchers showed this by extracting microbes — those living inside the mosses in an ambient temperature enclosure and those living in the warmest of the SPRUCE enclosures, about 16 F hotter — and transferring those groups of microbes to mosses that were grown in a laboratory setting without microbiomes of their own.

The researchers used environmental chambers at ORNL to subject the laboratory mosses to brief periods of hotter temperatures, called heat shocks. Under these simulated heat waves, the microbiome taken from the warmer enclosure conveyed significant heat tolerance to the laboratory mosses.

The scientists measured similar changes in the genes and proteins as well as an increase in moss growth in the laboratory moss that received the heat tolerant microbiome, even when researchers did not subject the lab moss to heat shock. This indicates that the microbes imparted some protective preconditioning to the moss.

Cyanobacteria are key members of the moss microbiome and have a vested interest in keeping moss healthy, as the moss offers the bacteria a refuge from the vinegar-like acidity of the peat bog. The microbes live inside dead cells, called hyaline cells, that ring the moss leaflets. These cells hold water for the rootless moss and provide the microbes with a less acidic environment. 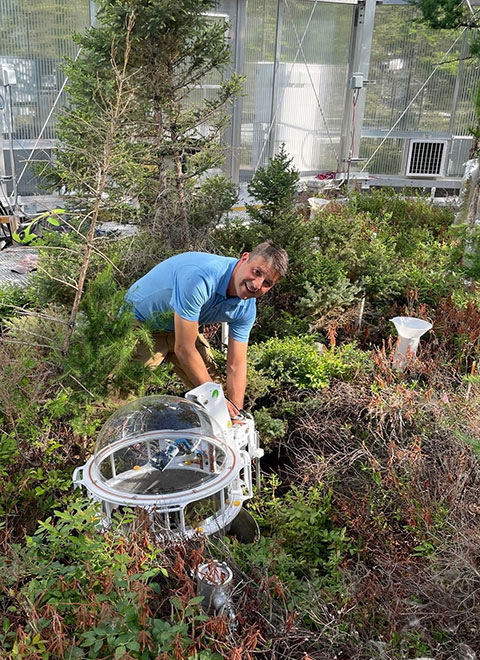 The moss needs the cyanobacteria as well. The microbes pull nitrogen from the air and provide it to the plant in a form the moss can use to fuel its growth. In return, the moss provides the bacteria with sugars. A recent study by Weston and his colleagues discovered new details about the workings of this important symbiotic relationship.

“We're finding that the mechanisms by which the plant and the microbes work together to form these influential symbiotic interactions are much more complicated than we thought,” Weston said. “The symbiosis depends on outside environmental interactions as well as really strong genetic interactions.”

The researchers found that the moss provides the cyanobacteria with sulfur-rich compounds and an unusual form of sugar, called carbon trehalose, that remains stable in the acidic environment. Though evidence shows these factors are important in maintaining the symbiosis between Sphagnum and cyanobacteria, the researchers do not yet understand the underlying mechanisms.

The team demonstrated that the acidity, or low pH, of the peat bog is essential to the moss-microbe symbiosis. Without the acidic environment, cyanobacteria do not interact with the moss and instead devote their nitrogen stores to their own growth.

“This answers a long-standing ecological question about fens versus bogs,” Weston said. “Fens are wetlands that are higher in pH, and the cyanobacteria are fixing a lot of nitrogen in those ecosystems. But you see very little moss in fens.”

The pH finding also points to a potential path toward monitoring and managing peat bogs in the future to maintain the acidic environment that favors moss-microbial symbiosis. The partnership keeps moss healthy and performing its critical functions in capturing carbon from the atmosphere and locking it away in the moist depths of the bog, adding to the meters-deep layers of ancient plant matter.

“I'm somewhat optimistic that if we can understand these keys to symbiotic interactions, maybe that will give us another method or mechanism by which systems can become more resilient to climate,” Weston said.

This article was republished with permission from the Department of Energy’s Oak Ridge National Laboratory. Read the original.