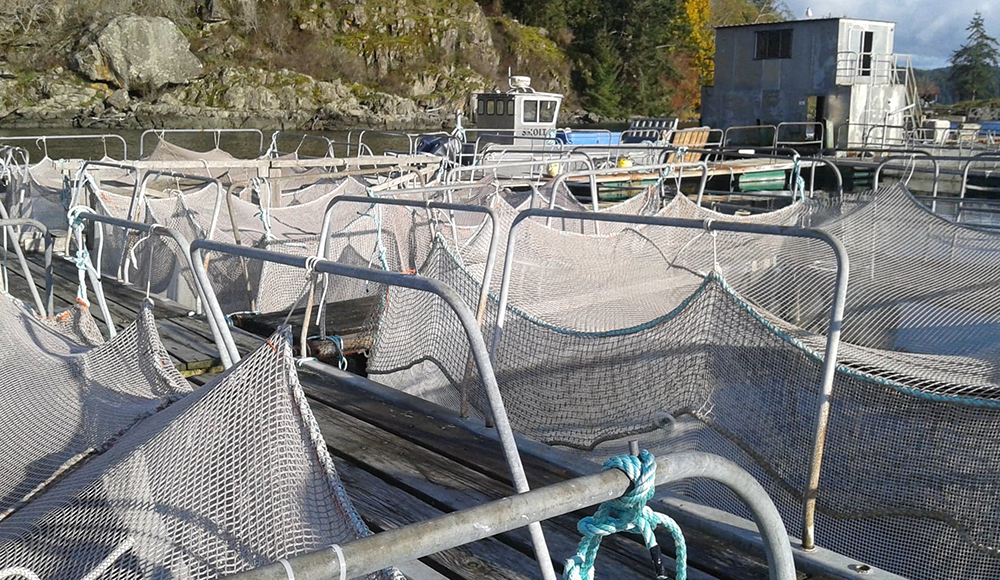 Chelsea Frank
As farmed salmon mature, they are transferred into salt-water pens like these at Yellow Island Aquaculture. "If you have more flexible fish, are they better able to cope with that transfer?" said Chelsea Frank.
According to Chelsea Frank, a graduate student in ecology and evolutionary biology who studies farmed Chinook salmon at Yellow Island, the fish are at an extra genetic disadvantage. Instead of two copies of the genome, they have three; hatcheries use special treatments to prevent eggs from getting rid of an extra haploid genome, the polar body, after being fertilized. Triploid fish tend to be larger and less aggressive than their diploid siblings, which is good for aquaculture. However, triploidy also has drawbacks: It compromises the fish’s immune systems and seems to make them less adaptable to stress. 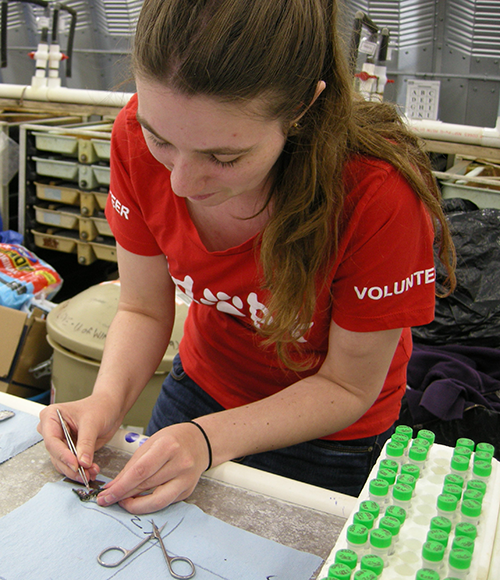 Frank and her colleagues in Christina Semeniuk’s lab and comentor Daniel Heath’s lab at the University of Windsor in Ontario are trying to determine whether an unlikely intervention — a probiotic supplement in fish food — might help triploid Chinook salmon fare better. They’re starting with how the fish behave.

“Behavioral flexibility and sensitivity … would be an immediate measure for physiological (and neural genomic) change, given the connections between the gut–brain–behavior axis,” Semeniuk said.
Frank tested how probiotic supplements added to fish food affected the way hundreds of fingerling diploid and triploid fish respond to novel stimuli such as a glass bead tossed into the tank, a predator-shaped dummy passing overhead and an approaching human researcher. She will present her work as part of the Genomics poster session during the 2021 ASBMB annual meeting; you can see her talk and post questions while the meeting is underway.

In the future, Frank plans to integrate transcriptomic analyses with her behavioral studies, an approach known as behavioral genomics. Little is known about how triploidy affects genes related to learning and memory, so even if probiotics have little effect, she stands to learn something interesting.