ASBMB Today Science ‘No one has been more dedicated to increasing the pipeline of minority scholars...’
Award

‘No one has been more dedicated to increasing the pipeline of minority scholars...’

The American Society for Biochemistry and Molecular Biology has named Lovell Jones the winner of the society’s Ruth Kirschstein Diversity in Science Award. Jones is a professor at both the University of Texas MD Anderson Cancer Center and the University of Houston as well as director of the joint Center for Health Equity & Evaluation Research.

Throughout his career, Jones has focused on minority health issues. He was a co-founder of the Intercultural Cancer Council, the nation’s largest multicultural health policy group focused on minorities, the medically underserved and cancer; chaired the first Biennial Symposium on Minorities and Cancer in 1987; and was among the leaders who worked with members of Congress to designate the third week of every April National Minority Cancer Awareness Week. 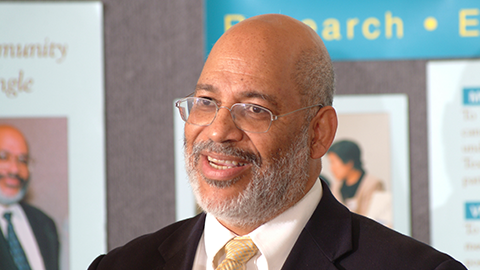 “Perception is reality to those who perceive it… Until you address the perception, you will never be able to truly address the reality. In setting up the minority training programs, Ruth took both aspects into account. It is truly an honor receiving this award in her name.”
—Lovell Jones

Thomas Landefeld, professor at California State University–Dominguez Hills, praised Jones for being “totally devoted to diversity issues in the scientific community, with a major emphasis on both addressing the underrepresentation of minorities at all levels in academia, industry and government, as well as the overwhelming issue of health disparities in our nation.”

Jones also has shown great dedication to mentorship of underrepresented groups. In supporting his nomination for the award, Marian Johnson-Thompson, professor emerita of the University of the District of Columbia, cited his “attention to promoting diversity in training programs, which has led to the next generation of health-disparities researchers and policy leaders.” Judith Kaur, from the Mayo Clinic, agreed: “No one has been more dedicated to increasing the pipeline of minority scholars than Lovell Jones.”

In addition to his efforts involving minority health disparities, Jones is also a pre-eminent scientist. He holds both M.S. and Ph.D. degrees in zoology from the University of California, Berkeley, and has worked in the department of biochemistry at MD Anderson since 1980, focusing primarily on the role of estrogen and environmental estrogenic agents in tumor induction in hormonally responsive tissues.

Jones received his award and delivered an award lecture during the Experimental Biology 2012 conference in San Diego.

The Ruth Kirschstein Diversity in Science Award was established to honor an outstanding scientist who has shown a strong commitment to the encouragement of underrepresented minorities to enter the scientific enterprise and/or to the effective mentorship of those within it. The award consists of a plaque, a cash prize of $3,000 and transportation expenses to present a lecture at the ASBMB annual meeting.