Scott Emr, a professor at Cornell University, got a lifetime achievement award in May during the American Society for Biochemistry and Molecular Biology’s meeting on ESCRT biology in Madison, Wisconsin.

Endosomal sorting complexes required for transport, or ESCRTs, are sets of proteins that enable vesicles to bud out from, rather than into, the cytoplasm. They are required for formation of vesicles within endosomes, some types of viral envelope budding and release, and the final steps of cell division. 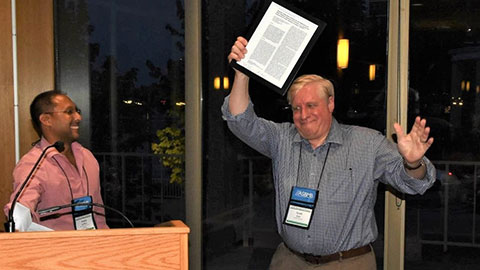 Courtesy of Juan Martin Serrano
Scott Emr received a framed copy of his first ESCRT paper, which was signed by members of the lab, at the ASBMB's ESCRT biology meeting in May at the University of Wisconsin–Madison. Meeting co-organizer Anjon Audhya, left, presented Emr's lifetime achievement award.

"Scott is generally acknowledged as the 'father' of our field, having discovered many of the ESCRT factors in yeast and defining their subcomplexes and different functions," meeting co-organizer Wes Sundquist of the University of Utah told ASBMB Today. Over the years, Emr's lab has identified more than a dozen ESCRT proteins in yeast and illuminated their roles in decoding lipid phosphorylation patterns, sorting cargo and bending membranes into new shapes.

Emr has been carrying out his research for four decades as a professor at the Caltech, the University of California, San Diego, and most recently Cornell’s Weill Institute for Cell & Molecular Biology, where he served as director.

Megan Reder/ASBMB
The ESCRT biology meeting was held May 17–20 in Madison, Wisconsin. Read our interview with co-organizer Wes Sundquist.