Jacques Fresco, an emeritus professor at Princeton University, a pioneer in DNA and RNA biochemistry, and a member of the American Society for Biochemistry and Molecular Biology for more than 60 years, died Dec. 5 of complications from heart disease. He was 93. 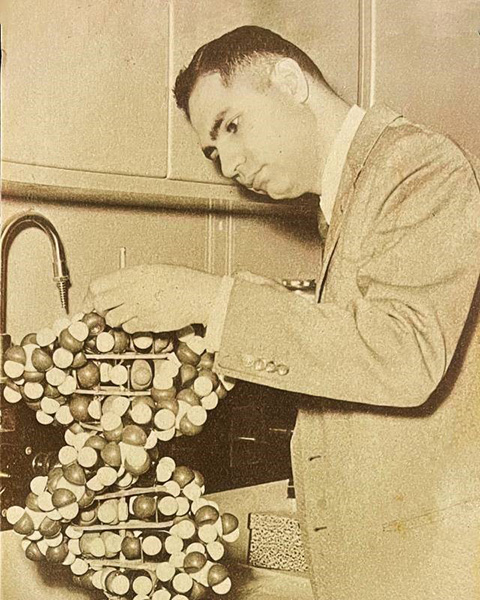 Courtesy of the Fresco family
Jacques Fresco, pictured with a 3D model of the standard Watson–Crick DNA double helix, designated a room in his lab at Princeton for building molecular models like this one.

Born May 30, 1928, in New York to Sephardic Jewish immigrants from Turkey, Fresco spoke Ladino, a 15th-century Judeo-Spanish language, before he spoke English. After graduating from the Bronx High School of Science at the age of 16, he earned a B.A. in biology and chemistry, an M.S. in biology and a Ph.D. in biochemistry, all from New York University, then did a postdoc at Sloan–Kettering Institute for Cancer Research and worked as a research fellow at Harvard University.

Fresco joined the chemistry department at Princeton in 1960, and he helped found a biochemical sciences program that grew into a department he chaired for 20 years. He then moved to the molecular biology department soon after its creation in 1984. He served on the Princeton faculty for 53 years and was active in his lab until shortly before his death.

Beginning with his Ph.D. in 1952, Fresco worked on the chemistry of nucleic acids, Stephen Buratowski, a professor at Harvard Medical School who did his undergraduate thesis with Fresco in 1984, said in a Princeton obituary. “So when the famous Watson and Crick paper proposing a structure for DNA came out in 1953, he was perfectly positioned to ride the resulting wave of DNA mania. … (H)e was a leader in showing that DNA and RNA conformations go well beyond the canonical ‘Watson–Crick’ base pairing of A–T and G–C within the double helix. Jacques’ studies of triple helices and alternative base-pairings were foundational for understanding how DNA mutations occur and how RNA-based enzymes (for example, ribosomes, RNAi, and CRISPR) can function.”

Fresco was married for almost 64 years to the former Rosalie Burns, and the couple had three daughters. His family said he was “a liberal thinker with a creative mind and a strong sense of tradition and obligation, outspoken and detail-oriented. … He was a humanitarian who spoke out against antisemitism and other forms of prejudice, a staunch defender of teaching evolution, a champion for animals and the less fortunate.”

He is survived by his wife; daughters, Lucille, Suzette and Linda, and their husbands; eight grandchildren; and two great-grandchildren.