Raul Ondarza–Vidaurreta, the first biochemistry instructor on the medical faculty at the Universidad Nacional Autónoma de México and a member of the American Society for Biochemistry and Molecular Biology since 1974, died Feb. 7. He was 93. 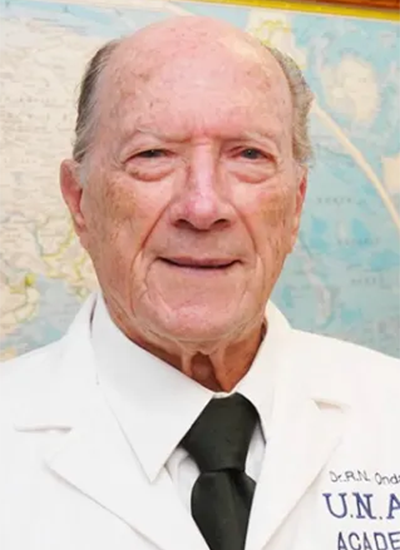 Born Oct. 29, 1928, in Tampico, Tamaulipas, Mexico, Ondarza–Vidaurreta earned his doctorate at the UNAM and completed postdoctoral fellowships at the University of Glasgow and New York University. In 1958, he joined the UNAM faculty, and he was appointed chair of molecular biology in 1963.  He founded and taught an optional class in epigenetics.

Ondarza–Vidaurreta also served as a medical sciences researcher at Mexico’s Instituto Nacional de Salud Publica, where he focused on drug targets for infectious diseases and human parasites, including cancer cells infected with the Papilloma virus. At various times, he was a professor at the Scripps Institution of Oceanography, a visiting researcher in the chemistry department at the University of California, San Diego, and a fellow of the John Simon Guggenheim Memorial Foundation.

Ondarza–Vidaurreta wrote more than 15 books, including biology texts, and numerous chapters and articles. Among his many honors, he received the Academia Nacional de Medicina de México’s Carnot Award and an honorary doctorate from the University of Paris XIII. In addition to the ASBMB, he was a member of National Academy of Medicine of Mexico, the Biochemical Society of Great Britain, the Mexican National Legion of Honor and the International Society for the Study of the Origin of Life. He was a founder of the Mexican Academy of Sciences and the Mexican Association of Human Genetics.