Deciphering antiviral mechanisms during a pandemic

At the onset of the COVID-19 pandemic, many research groups pivoted their focus to the development and understanding of drugs that could be used to combat the deadly virus SARS-CoV-2. When Calvin Gordon joined Matthias Götte’s lab at the University of Alberta, Canada, his initial goal was to study the inhibition of RNA dependent RNA polymerases, enzymes that are responsible for replication in viruses like Ebola, influenza and severe acute respiratory syndrome, or SARS. 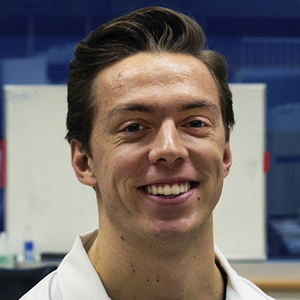 Gordon first discovered his passion for research during the last two years of undergraduate study at Mount Royal University of Calgary, Alberta. Before entering his first year of graduate study, Gordon was encouraged by a friend and fellow U of A graduate student to seek professor Götte due to their aligning research interests. Gordon found the lab to be a perfect fit.

In March of 2020, as a consequence of the pandemic, Gordon’s focus shifted to understanding the mechanisms behind broad-spectrum antivirals such as remdesivir and molnupiravir. His research led to the publication of a paper in the Journal of Biological Chemistry detailing the mechanism of molnupiravir’s interaction with SARS-Cov-2 on a molecular level.

Like many scientists performing essential research at the height of the pandemic, Gordon found the experience to be stressful yet humbling.

“It was a weird and mentally taxing experience for sure,” he said. “We were fortunate, being able to go into the lab and maintain a routine with our research — not many people could do that.”

Gordon is working toward his Ph.D. in medical microbiology and immunology at the University of Alberta and enjoying every minute. “My favorite part is being at the bench, running assays,” he said. “I pinch myself most days because I get to come into the lab and work with incredible people.”

When asked about his future, Gordon said that he hopes to recognize where the opportunities are and make the most of them.

How molnupiravir works against COVID-19

Molnupiravir is a broad-spectrum antiviral drug that first was approved in the U.K. in November 2021 and later won emergency approval in the U.S. to treat SARS-CoV-2 viral infection in adults.

Early in the pandemic, Calvin Gordon and others in Matthias Götte’s lab became interested in understanding how antivirals like molnupiravir work against SARS-CoV-2. The lab’s previous experience researching coronaviruses such as Middle East respiratory syndrome, or MERS, allowed them to begin evaluating drugs designed to combat SARS-CoV-2.

The researchers found that molnupiravir interferes with the viral replication cycle. Here, the drug can serve as a substrate for viral RNA polymerases, which are enzymes that are responsible for replicating the viral genome. When molnupiravir is incorporated into the viral RNA, depending on where it is incorporated, the resulting mutation will inhibit synthesis and promote lethal or nonfunctional mutations.

“I hope people can see our research on these antivirals and how understanding their mechanisms provides groundwork for optimizing and developing new antiviral agents.” Gordon said.