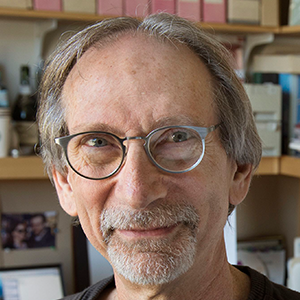 Howard Ronald Kaback, professor of physiology at the University of California, Los Angeles, and member of the National Academy of Sciences, died Dec. 20 at the age of 83.

Ron grew up living behind his father’s pharmacy in the Overbrook section of Philadelphia. In high school, he studied mechanical arts, played football and baseball, and as a senior was president of the student body. In his freshman year, Ron met Molly Schreibman, known as Teenchy, and the two started going steady. They married during Ron’s third year in college and remained together for the rest of his life. 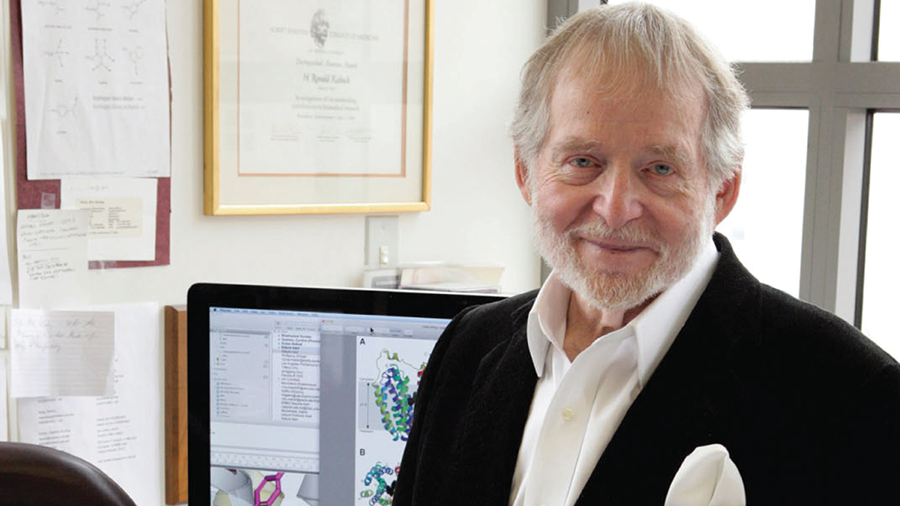 UNIVERSITY OF CALIFORNIA, LOS ANGELES
Ron Kaback in his office at UCLA.

Ron said the luckiest break in his life, after meeting Teenchy, was to be admitted to Haverford College. The biology department at Haverford was staffed by a young faculty, fresh out of postdoctoral training, who taught the latest findings in molecular biology. They invited eminent scientists like David Bonner, Arthur Kornberg, Joshua Lederberg, Salvatore Luria and Linus Pauling as outside lecturers. Exposed to the exciting world of cutting-edge biochemistry, Ron began to entertain fantasies of becoming a research scientist. As a senior, he published his first paper, on intermediary metabolism of Thiobacillus thioparus.

The summer after graduating, Ron worked in Britton Chance’s lab at the University of Pennsylvania. This was when Chance discovered respiratory control in mitochondria, which Peter Mitchell later showed was due to the creation of an electrochemical proton potential across the mitochondrial membrane — the same driving force that powers the lactose permease that Ron studied for most of his career. As a medical student at the Albert Einstein College of Medicine in New York, Ron studied bacterial resistance to D-serine in Adele Kostellow’s lab. He wanted a cell-free system to examine amino acid uptake and prepared bacterial membrane vesicles by osmotic lysis. This preparation, which he jokingly called Kabackosomes, proved to be the key element of his bioenergetic characterization of bacterial transport.

After medical school, rather than being drafted to serve in Vietnam, Ron chose to perform his military service at the National Institutes of Health working in Earl Stadtman’s lab. Here, Ron continued to work on his vesicles and published his second paper, characterizing proline transport by the vesicles, in Proceedings of the National Academy of Sciences. Ron also had early success with the phosphoenolpyruvate-dependent phosphotransferase system discovered by Saul Roseman. This unusual transport complex used hydrolysis of PEP to drive sugar accumulation by phosphorylating the sugar as it was transported into the cell (or vesicle). Ron interacted with many other young scientists at the NIH, including Wil Konings, Vincent Marchesi and Alan Peterkofsky, all of whom became lifelong friends. For Ron, a colleague who shared his passion for science naturally became a personal friend to be invited home and into his extended family.

While at the NIH, Ron discovered that d-lactate, oxidized by a specific dehydrogenase in the cell membrane, would drive accumulation of many substrates to high intravesicular concentrations. Ron decided to focus on lactose transport catalyzed by lac permease, coded for by the well-characterized lacY gene. Only vesicles prepared from Escherichia coli expressing lac permease accumulated lactose in the presence of d-lactate. He studied lac permease for the rest of his career. 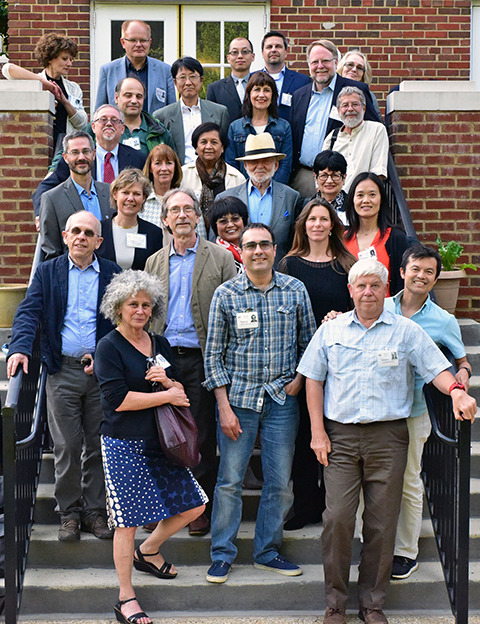 In the spring of 1970, Ron moved from the NIH to the Roche Institute of Molecular Biology, a research institute set up by the Swiss drug company Hoffman–LaRoche and headed by Sidney Udenfriend. Herb Weissbach had offered Ron a position in the RIMB biochemistry department, where Ron could continue his research on transport without having to apply for external funding. He quickly found himself embroiled in a controversy over how d-lactate oxidation was coupled to lactose uptake.

Ron’s initial hypothesis was that lac permease was alternatively reduced and oxidized by the respiratory chain and in doing so went through conformational changes leading to lactose transport. This flew in the face of Peter Mitchell’s chemiosmotic hypothesis, which postulated that transmembrane proton potentials generated by a respiratory chain could serve as a driving force for both transport and ATP synthesis.

At first, Ron resisted, performing new experiments to test the possibility that a proton potential could be involved. Ultimately, the results swayed his opinion until he became a strong proponent of chemiosmotic coupling in transport, declaring (tongue in cheek) that Peter Mitchell must be God … or a close relative. Ron was like that, always fascinated with the latest results and how they revealed new insights into transport mechanism. It didn’t matter that he had a different opinion last week; he always went with the results. In 2012, Ron became the first American awarded the Peter Mitchell Medal by the European Bioenergetics Conference.

I worked in Ron’s lab during this period at RIMB, and it was a heady mixture of exciting science and childlike antics. He would test that oxygen was flowing through the tubes into the transport reactions by pointing the outlet at his lit cigar and making sure the resulting flame was sufficiently impressive. One day he called all the postdocs in the lab, one at a time, into his office. He asked us to look at some experimental results on his desk. As each hapless postdoc leaned forward to look at the data, Ron set off the CO2 fire extinguisher hidden under the desk with its nozzle aimed at the victim. After the shock wore off, Ron told the postdoc to leave by the back door of the office and not to tell anyone until he had run through his entire staff.

In the 1980s, Ron took advantage of the recent cloning and sequencing of lacY and the availability of site-directed mutagenesis to embark on a quest to generate mutant permeases with all endogenous cysteines removed and with each amino acid in the sequence replaced, one at a time, with cysteine. The mutants generated in this project were extremely useful in identifying residues that were absolutely required for activity (most of which later were found to directly contact bound substrate). Some of these cysteines could be oxidatively crosslinked to others, providing an early sense of the 3D structure of the protein. In later studies, Ron used these cysteine mutants to delineate the substrate permeation pathways and the conformational changes in lac permease that open and close them.

The Gospel according to Kaback

(This text is from a slide that Ron Kaback used to show in all his talks.)

Ron was elected to the American Academy of Arts and Sciences in 1986 and to the National Academy of Sciences in 1987. The NAS honor caught Ron on a cruise ship in the Caribbean, courtesy of his brother-in-law, who owned a tire company and chartered the cruise as a perk for his buyers. Ron and Teenchy were overjoyed at the news but had no one to share it with aside from the tire buyers, who had no idea what it meant.

In 1988, Ron was recruited by the physiology department at UCLA. They made him an offer he couldn’t refuse: He no longer would be a department chair as he was at Roche, and he would become a Howard Hughes Medical Institute investigator, saving him yet again from having to apply for federal funding. The sunny southern California weather meant he could play tennis outdoors all year long.

The rest of Ron’s career was dedicated to understanding the mechanism by which a transmembrane proton gradient was coupled to galactoside transport. To this end, Ron applied a dizzying array of techniques, including single-molecule fluorescence resonance energy transfer, double electron–electron resonance , mass spectrometry, cross-linking and Fourier-transform infrared spectroscopy. If Ron felt that any technique could provide insight into the mechanism of lac permease, he would find an expert practitioner of that technique and convince them to collaborate.

"Ron was an explosive and captivating bundle of knowledge, energy, humor (often a bit wild) and tennis acclaim."

"Ron was more than a collaborator, he was a true friend."

"I never missed a chance to hear him talk at meetings, fully realizing that playful ridicule would be directed at me sometime during the talk. Which I cherished."

"Over these 45 years, I slowly learned to know the real Ron, mentor, colleague, counsellor and leader, but the name that fits best is Friend — with a capital F."

"Ron and I would carry on a 20-minute conversation by the candy machines at the RIMB, during which he would buy and eat four or five peanut candy bars."

"He could and would quickly apply new technologies and methods if they appeared promising. His broad experimental approach was always inspiring to me and I have followed the same pathway. Ron was in many ways a pioneer."

— Robert Gennis, friend and collaborator in the 1980s

“I cannot recall any story about Ron that did not include hilarity in some form. Neither his passion for science nor his astonishing, roiling energy could overwhelm the sense of humor that pervaded his entire being.”

“Presumably, our wrestling on a pool table at a Gordon Conference would be too revealing of our essential and cherished immaturity.”

“I liked him a lot. Besides his great science, I really appreciated his generosity and sense of humor.”

“When discussing ideas with Ron, he always used to say, ‘try it’ and immediately give a suggestion for an experiment.”

— Etana Padan, took a sabbatical with Kaback in the 1970s

“Although I had never worked in his lab and did not know much about transporters, he immediately treated me with kindness and respect. I learned a lot from him, as I am sure did  everyone else.”

— Robert Edwards, assistant professor at UCLA in the 1990s

"When Ron heard a new joke, he immediately left his office and told it to every person on the floor — his way of memorizing and improving the storytelling.”

“Even though he was recognized and respected for his research on lacY, I’m not sure that many people realized the depth of his intuition into bioenergetics, and his understanding of how active transport occurs.”

— Phillip Klebba, did a sabbatical with Kaback in 2011

“An outstanding human being, who never lost interest in his former students.”

“We will always remember Ron as an excellent scientist, outstanding teacher, great person and wonderful friend.”

— Kirsten and Heinrich Jung, Kaback postdocs in the 1990s

“Ron was like a grandfather-figure to me. I just felt so fortunate and so privileged to have known him and become his friend.”

“Kaback’s law: ‘Darwin was wrong! Natural selection is NOT the driving force for the evolution. Rather, it is the desire of Mother Nature to screw over the investigator!’”

— Natalia Ermolova, postdoc in the 2000s

“Wondering about the hereafter, Ron said, ‘I can’t imagine the world without me!’ Well, I can’t either.”

— Stephen White, friend and collaborator from the 2010s

Gary Rudnick is a professor of pharmacology at the Yale School of Medicine. From 1973 to 1975, he did postdoctoral research on lactose permease with Ron Kaback at the Roche Institute of Molecular Biology.