Selbach seeks the science
behind the magic

When Matthias Selbach was a child, he loved science and magic tricks. His father gave him a book of science experiments that he could do with household items. He spent many afternoons testing tricks like the inverted water glass. With just an index card, he magically could keep a glass of water from spilling when he turned it upside down. The results fascinated him, but he wanted to understand what made the experiments work. 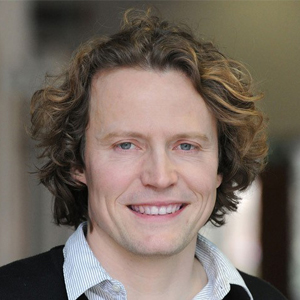 “For me, science was a bit like a magic trick,” he said. “There is some truth behind it that may not be obvious at first. Once you understand the explanation, you can share it with others and excite them about it.”

That curious instinct was the foundation for Selbach’s future career. He earned his Ph.D. in a cell biology lab at the Max Planck Institute for Infection Biology in Berlin. However, he felt constricted by the classical, hypothesis-driven methods he used in his Ph.D. work. He wanted a system for asking broad scientific questions that he could answer on a global scale.

During his postdoc with Matthias Mann, Selbach immersed himself in the world of proteomics. In this field, he asked fundamental biological questions that he could address with mass spectrometry technology to yield big-picture data sets.

Selbach is now a professor at the Max Delbrück Center for Molecular Medicine in Berlin, where he and his team use proteomics to analyze protein synthesis and decay as well as protein–protein interactions. He is particularly interested in the interface between biology and mass spectrometry technology.

“This technology is like a Swiss Army knife for biomedical research,” he said. “It’s extremely versatile, and you can always find new ways to apply it to biological questions.”

Proteins are the key actors in most biological processes, and Matthias Selbach’s lab studies the dynamic proteome to interpret how genomic information yields specific phenotypes.

In his recent work, Selbach aimed to understand how bird flu affects the proteome of human cells. Although bird flu usually does not spread efficiently from human to human, specific strains could trigger pandemics. Scientists hypothesize that the 1918 H1N1 flu virus that killed millions of people worldwide originated in birds.

Selbach’s team infected human lung cells with bird or human flu virus and analyzed changes in the proteome using mass spectrometry. They found that the viral matrix protein M1 was produced in higher quantities in the cells infected with human flu virus. The M1 protein is required for exporting newly synthesized viral RNA from the nucleus and assembling infectious progeny for release. Their findings provide a molecular basis for understanding the species barrier for flu virus.

The influenza virus study, recently published in the journal Nature Communications, is just one example of how Selbach uses proteomics to analyze the underlying causes of human disease. His lab also studies how disease-associated mutations and cell signaling events affect protein-protein interactions. They use high-throughput techniques to identify mechanisms linked to strong disease phenotypes. Selbach hopes these methods eventually will lead to earlier patient diagnosis and advances in personalized treatment.