Saphire, a ‘leading light in molecular biology and human health’

Erica Ollmann Saphire, professor of immunology and microbial science at The Scripps Research Institute, is the recipient of the American Society for Biochemistry and Molecular Biology Young Investigator Award. Her success solving the structures of complex viruses has pushed forward the effort to develop treatments to fight Ebola and other deadly viruses. Saphire’s work also has deepened researchers’ understanding of fundamental principles of biochemistry and molecular biology. 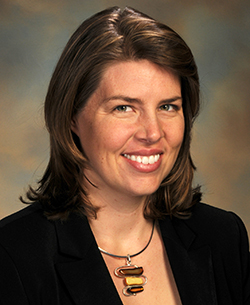 "This is an award to be shared with many others. I am fortunate to work alongside gifted collaborators and the talented postdocs, students and technicians in their labs and my own. Credit also goes to my field. The community of Ebola virus researchers pulled together this year to advance basic research, diagnostics and treatments in order to alleviate what suffering we could during this outbreak and prepare for any re-emergence. " — ERICA OLLMANN SAPHIRE

This award recognizes outstanding contributions to the field of biochemistry and molecular biology by early-career scientists. “In the 10 years of her independent career, Dr. Saphire has ingeniously applied structural biology and protein biochemistry to the problems of global health, making fundamental new discoveries along the way in how proteins behave,” George N. Phillips Jr. of Rice University wrote in his letter of support for Saphire’s nomination. “I don’t know of any other young structural biologist with such insight and who has made so many textbook discoveries this early in her career.”

As a Ph.D. student, Saphire solved the crystal structure of a broadly neutralizing antibody against HIV-1. Her “findings immediately guided vaccine design,” Robert V. Stahelin of the Indiana University School of Medicine at South Bend wrote in his nomination letter, “but, for the wider field of immunology, it was and still remains the only structure of the entire human antibody.”

Saphire’s first discovery as an independent investigator was the structure of the Ebola virus surface glycoprotein. Her structure “revolutionized thought in the field of Filovirus cell entry,” Michael G. Rossmann of Purdue University wrote in his letter of support. It correctly predicted that the Ebola virus receptor was in the endosome and not on the cell surface, where the rest of the field was looking. After this success, Saphire solved the structures of the Sudan virus glycoprotein and the Marburg virus glycoprotein. These structures, Stahelin wrote, “have become a critical roadmap for development of lifesaving antibody therapies against Ebola and related viruses.”

Saphire’s recent work is considered widely as the most fantastic of her already impressive accomplishments. Saphire demonstrated that the Ebola virus matrix protein VP40 folded into multiple, distinct, 3-D structures, each form having a different function in the virus life cycle. “This is remarkable,” elaborated Stahelin, “because, as molecular biologists, we learned a central dogma that a protein sequence defines its single and particular structure, which, in turn, defines its function.” Her findings represent “a thought-provoking expansion of the central dogma of molecular biology,” wrote Phillips, “revealing new ways by which information is encoded in the genome and compelling the field of structural biology and biochemistry to re-evaluate when we think ‘the’ structure is solved rather than ‘a’ structure is solved.”

Saphire also is “an extraordinary citizen of the community, not just by doing science in her laboratory at Scripps but also by going into the field,” Rossmann praised. “She has traveled to Africa (for a collaboration) to develop her proteins into diagnostics, to understand the ecology of these diseases and see the interaction between pathogen and host,” wrote Stahelin. “Her proteins not only solve structures and provide biochemical sights, they are being used right now in clinic to diagnose disease and save lives.”

Saphire earned her bachelor's degree at Rice University, where she worked under Kathleen Matthews, winner of the ASBMB's William C. Rose Award. "I am thrilled to join Kathy at ASBMB this year," Saphire said. "She turned me on to research in biochemistry and has always been my model for how to be a scientist and scientific citizen." Saphire went on to The Scripps Research Institute for her Ph.D. and later joined the faculty there.