The art of paper folding and the science of protein folding 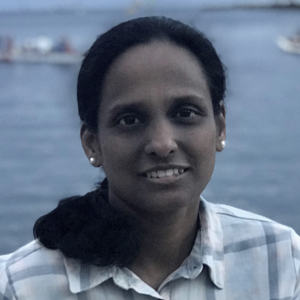 In a world where we glorify busyness, slowing down can be a challenge. In recent months, an invisible enemy has forced many of us to slow down and shut down our usual routines. As the parent of a teenager, I’ve had my own set of challenges. Kids, especially teens, need to be engaged, motivated and entertained.

When we were brainstorming ways to make the most of our time during the spring lockdown, an origami jumping frog on the internet caught our attention. We were drawn to the simplicity of origami; all we needed was paper and some basic folding skills. We turned to what we thought was the only reliable source to help us learn about it — YouTube — and found numerous tutorials on how to fold paper. These videos got my teenager hooked. Our floors soon were covered in large sheets of paper as we learned about precreasing, folding, collapsing and all sorts of other origami tidbits. 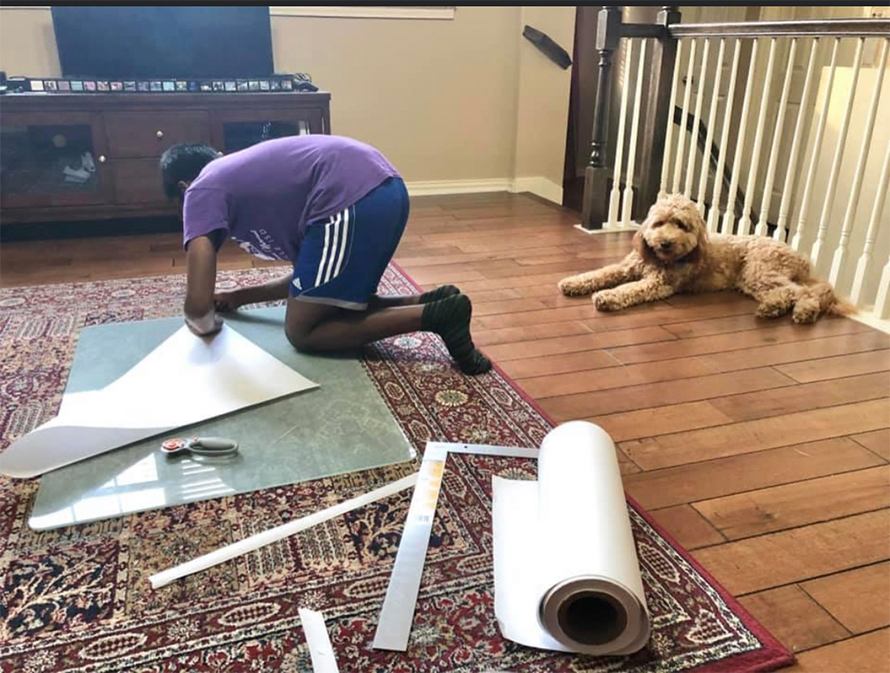 Sudha Neelam
The author’s son Nikhil gets started on an origami project. Precise measurements are key to successful paper folding.

This activity has kept my son Nikhil engaged. He spends hours trying to get accurate measurements on a square of paper; a fraction of an inch off will make him start all over again. He insists that the success of an origami structure lies in the precision with which the paper is measured and folded. Watching him meticulously measure, fold, collapse and shape paper made me think of our own biological origami and the science of protein folding. Proteins, the essential building blocks of life, can only function if they are folded properly. This idea piqued my scientific curiosity and I wanted to explore the similarities between paper folding and protein folding. 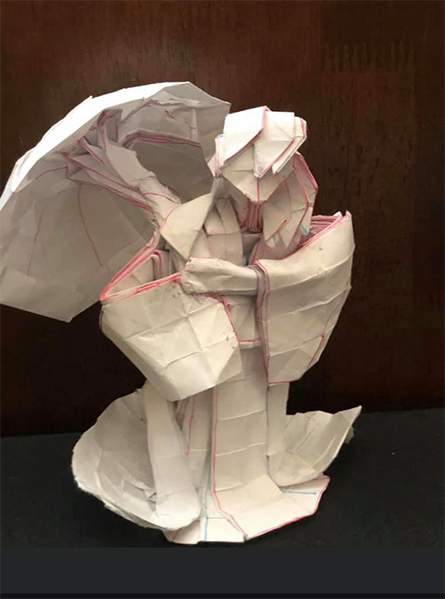 Sudha Neelam
Titled “Walking in the rain,” this origami structure folded by the author’s son Nikhil portrays a woman carrying an umbrella.

A brief history of origami

Origami, the ancient Japanese art of paper folding, has entertained generations with its beautiful simplicity. Origami used to be called orikata. The word “origami” comes from two Japanese words; “oru” means “to fold,” and “kami” means “paper.” Paper was invented in China around 105 A.D., and Japanese origami originated when Buddhist monks carried paper from China to Japan sometime in the sixth century. Origami paper was difficult to make and therefore expensive. In Japan, handmade paper was a luxury used only on specific religious occasions.

Before the invention of paper, people did recreational folding with materials such as cloth or leather. As with most art forms, new techniques have evolved. Origami is no longer folded exclusively with origami paper. People use printer paper, wrapping paper, old newspapers, junk mail and even scrapbook paper. Unlike traditional origami, modern variations involve cutting, shaping and even using glue to make the structure more sturdy and stable.

Proteins: Our own biological origami

Proteins, the building blocks of life, also are folded. However, in the case of proteins, they fold spontaneously based on a series of codes in the form of amino acids, which are akin to the crease patterns and folds of origami. This biological origami depends on the correct genetic code, accurate assembly of amino acids and the precise folding of the amino acids into a functional protein.

Sudha Neelam
These PowerPoint images depict how protein folding affects the function of the protein. The single chain of amino acids must be folded into 3D structures to create functional proteins.

Initially, proteins are synthesized as a long chain of amino acids. The sequence of amino acids and their properties determine how the proteins are folded. Proteins are at the core of all the biological and molecular machinery in our bodies. They must be synthesized, assembled and folded accurately to perform the critical functions that keep us alive.

Misfolded, unfolded or inaccurately folded proteins are nonfunctional, and they form a sticky, gooey mess. The sticky, misfolded, obsolete protein becomes a hindrance to our bodies’ normal functioning.

Sudha Neelam
Changes or mishaps in the folding of the single chain result in a misfolded or nonfunctional protein.

The yin and yang of folds

Each type of fold in origami has its own distinct pattern and purpose. For example, the popular origami crane starts with a bird base. This structure has a square base and petal folds. If we make a mistake in one of the folds or switch a petal fold for a mountain fold, we will end up with an unstable, inaccurate and perhaps disfigured crane.

Sudha Neelam
Similar to protein folding, mishaps or mistakes in origami folding can result in mismatched structures. These PowerPoint images show correct and incorrect folding patterns for an origami crane and how each affects the final structure.

Robert Lang, an origami pioneer, creates incredible design patterns from plain paper. I find it fascinating to look at his crease patterns and envision how one particular diagonal crease will be folded into the tentacles of a bug, or how one mountain fold or valley fold will become the base of a 3D structure.

Similarly, our DNA carries crease patterns in the form of a genetic code that determines the type and sequence of amino acids. Like origami crease patterns and folds, our biological origami depends on folding the correct sequence of amino acids into pristine functional proteins. A group of disorders known as proteopathies occur when the proteins are misfolded due to incorrect assembly of the amino acids, genetic changes or abnormal folding patterns. In neurodegenerative diseases such as Alzheimer’s and Parkinson’s disease, the proteins are misfolded and become nonfunctional. Knowing the structure and folding patterns of proteins is vital to understanding their functions, and this in turn will help in designing therapeutics for these diseases. 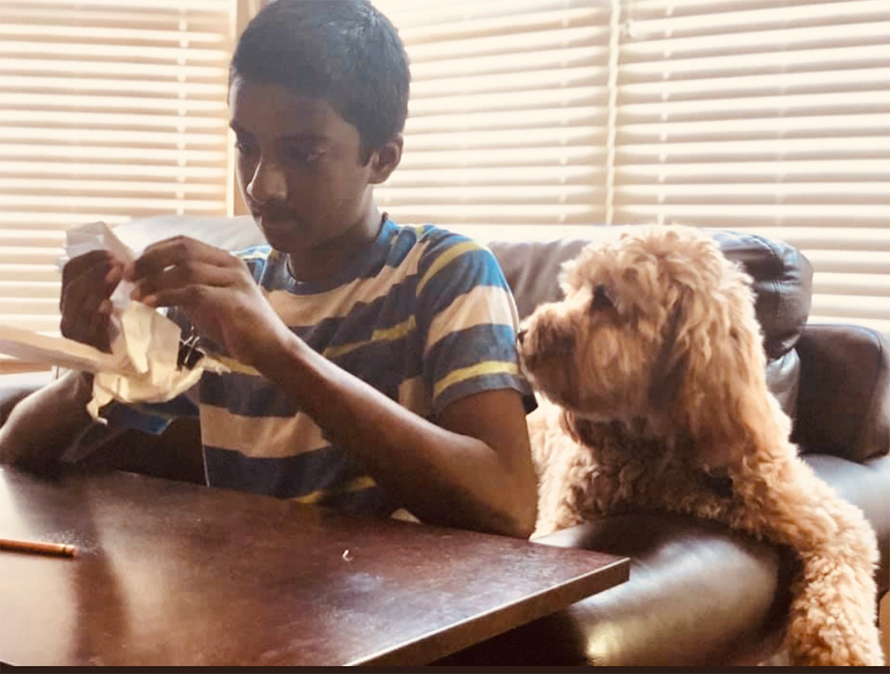 Folds of life and art

A protein starts off as a flat sheet before being folded into a 3D structure. The protein sheet is similar to origami paper. Both need to be measured and folded accurately. Precision, perfection and patience are of utmost importance in creating the simple yet beautiful, pristine folds of life and art.

As scientists continue to explore protein folding, and while Nikhil and I experiment with the art of paper folding, I can’t help but wonder if origami is a mirror reflecting the invisible folds of our life.

Sudha Neelam is a research scientist in the field of cell biology. She is interested in studying the mechanisms of protein synthesis, how misfolded proteins cause diseases and how therapeutics can correct damage caused by misfolded proteins. She also loves to cook, which she believes is a form of science.

Understanding the protein defects that cause Charcot–Marie–Tooth disease
Isha Dey
Keeping bone and muscle strong on the ISS
Amber Dance
Oxygen sensing and adapting to altitude
John Arnst
Up the creek without a sequence?
Byron Rubin
Meet Jonathan Weissman
Rajendrani Mukhopadhyay
Could corals use sound to communicate?
Nancy D. Lamontagne