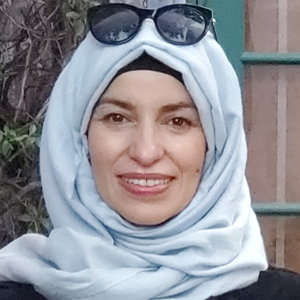 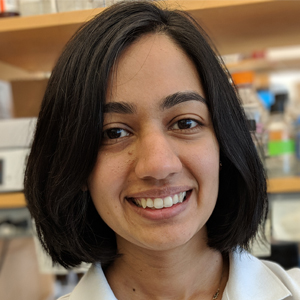 Normally, life throws things at us, leading to some aha moments. In my case, my kids were doing the throwing part on behalf of life. 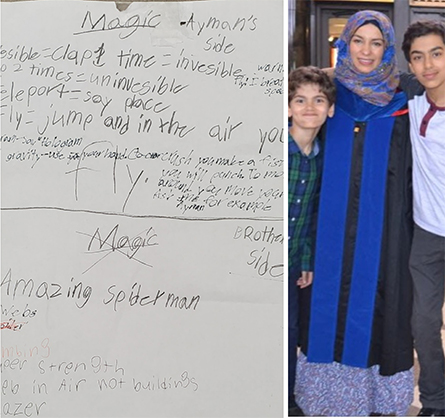 Courtesy of Mona Al–Mogotir
Left: The author's sons gave her these original specific aims for the superheroes
project during her first year in graduate school. The older one, Ayman, wrote on behalf
of his little brother, Ibraheem, as noted in the bottom "brother side." Ayman's
payback for doing the writing was the freedom to allocate more powers to himself.
He evencrossed out the request for magic for his brother. This sheet went through one
edit by Ayman several months later as shown by the different pen colors and addition
and omission of certain powers. Right: Mona Al–Mogotir, Ayman and Ibraheem five
years later, after her graduation ceremony in May 2018.

I started my Ph.D. with two superhero-aspiring boys, ages 6 and 3. One day, as I was reading and dodging flying toys and shoes generated by superheroic excitement, a moment of silence followed that storm instead of the other way around. Two amused faces were looking over my shoulder at a figure on my laptop screen.

"You are making a Hulk, right, Mom?" one asked.

I looked to check how serious they were and then looked back at the figure to connect some dots. It was a microscopic image of green fluorescent cells. I realized the connection with the green pulsing cells in the opening sequence of the 2003 Hulk movie. A moment of desperation led me to say "Yes!" and continue explaining that this was indeed my thesis project.

In the years that followed, I enjoyed support most student parents can only dream of. My only worry was to be sure my boys didn't perceive me as David Banner's evil scientist character. And I had to give routine updates of my progress over the dinner table, probably more often than I did with my Ph.D. committee members.

Eventually, I was handed a paper with a list of superpowers to work on, which looked very much like a specific aim page. With time, speculations were raised, and I had just the right response to obliterate them, a green EGFP-tagged protein in solution.

At the end of my defense presentation in April 2018, I decided to come clean about my real project during my acknowledgments. My two superheroes-in-waiting were among the audience. Since then, the story lives as a joyous memory at home and work.

Not quite out of the box

It was way back during my master's program that I had this epiphany of sorts. 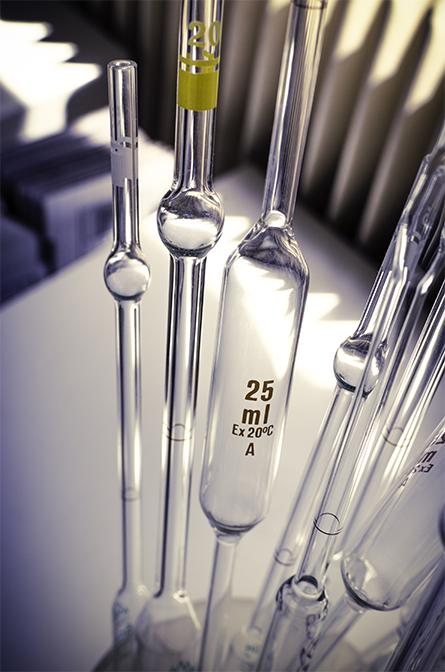 One of our laboratory classes seemed on the verge of being canceled due to the absence of clean glass measuring cylinders. Or was it pipettes? I don't remember that detail now. The bottom line was that we needed to measure a specific volume of a liquid reagent and didn't have the necessary apparatus.

While the prospect of a free afternoon lit up my classmates' faces, something in the back of my mind lit up as well. An abstract idea, a definition memorized and an equation used to answer quiz questions suddenly made perfect practical sense.

"But we don't need to measure the volume," I piped up.

While some wondered where I was going with this, I added, "We know the density. We can calculate the weight for the volume we need and just weigh it out."

I looked around for a response.

That was just in my head. In reality, we were given the afternoon off, and I took the time to reflect on this with two of my friends. They thought it was a pretty smart idea. They even thought that the professors were impressed.

Then why didn't we do it? Because, when an out-of-the-box idea meets the set ways of human nature, the latter often wins.

Recognizing this was an aha moment reminded me to be open to taking risks and creative suggestions, trying new things, and applying old ideas in new ways. How well has that worked out for me so far? That's a different story!

Mona Al–Mogotir is an analytical chemist at GlaxoSmithKline. She earned her doctorate in biochemistry and molecular biology from the University of Nebraska Medical Center and continued her postdoctoral training in Gloria Borgstahl’s lab for three years before moving into her current position.

Najla Arshad is an associate research scientist in the laboratory of Peter Cresswell at Yale University, where she studies how ER chaperones regulate immune responses. She received her Ph.D. from the Indian Institute of Science.