When Lorna De Leoz invited labs to participate in her glycomics study, she hoped for 20 responses. Instead, she was deluged by emails from around the world.

De Leoz, then a research chemist at the National Institute for Standards and Technology was planning a study on how pharmaceutical and academic laboratories measure glycans, complex carbohydrate molecules that cells use to posttranslationally modify various proteins. The project, the subject of a recent paper in the journal Molecular & Cellular Proteomics, grew to include 76 participating labs.

The flood of responses, including from many well-known pharmaceutical companies, illustrates the industry’s appetite for a better understanding of protein glycosylation. A growing number of drugs are made from proteins — most often antibodies — and this is a big variable in manufacturing them. 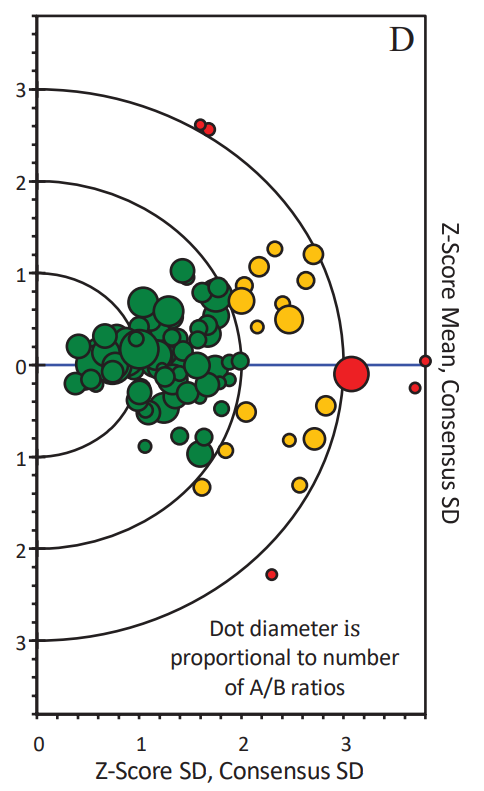 NIST researchers provided two samples of an antibody, one treated to remove certain terminal sugars. This figure shows participants’ degree of agreement about the relative concentration of each glycan between the two samples.

Glycans make up just 3% of the weight of an antibody-based drug, but they have an outsized impact. A change in glycosylation from one batch to the next can alter a drug’s binding to its target or the likelihood that it will be attacked by the patient’s immune system. To make sure patients receive the safest and most effective medicine, researchers must be able to keep track of the glycosylation status of antibody drugs.

Stephen Stein, a fellow at NIST’s mass spectrometry data center, was the senior author of the study. “Glycosylation is one of the most important physical-chemical aspects of biology,” he said, “but one of the most difficult to analyze.”

Glycans’ complex and heterogeneous structures make analysis difficult. Unlike macromolecules such as DNA and proteins, which are made of a linear chain of subunits, sugars can link in several places, building branched chains. Complicating matters, while those single-chain macromolecules are usually made by referring to a template, glycans are more free-form. A scrum of enzymes, each making its signature modification, determines their final structure.

Researchers have developed many methods to measure glycosylation, and their results can vary. That’s where the NIST comes in: The institute is dedicated to establishing shared measurements. To help glycomics scientists get clear about what they’re measuring, De Leoz sent each participating lab a sample of the same antibody, a failed drug candidate. It took almost a month to pack up samples and fill out dozens of customs forms.

The glycomics techniques among the participating labs were diverse. Some measurements, often used in manufacturing, are optimized to find the exact quantity of one or two glycan structures; others, more often used in academia, are better suited to showing the broad scope of glycan types that are present. “There was no one method that was clearly better than all the others,” Stein said. “They all have different advantages and disadvantages.”

The NIST researchers used a statistical approach to combine measurements from disparate labs into a list of consensus estimates of the concentration of certain glycan compositions. The NIST will leave it up to the research community to figure out which measurement approach to use. MCP Editor-in-Chief Alma Burlingame said he hopes the paper will “point out to the biopharma industry and glycoanalytical community the urgent need to bring some methodological rigor to bear in the popular and important field of FDA-regulated antibodies.”