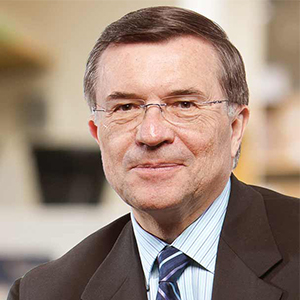 Born in South Africa in 1927, Sydney Brenner started medical school at such an early age that he was too young to practice medicine at the conclusion of his training. This gave him time to take classes in anatomy and physiology that included bench experiments. He abandoned medicine and went on to write a master’s thesis in the field of cytogenetics, which served him well when he became a molecular biologist. This was the first turning point in his remarkable life. Sydney Brenner speaks at a 2011 symposium at the Okinawa Institute of Science and Technology. OIST/Wikimedia Commons

In 1953, Sydney was pursuing doctoral research at Oxford when he heard about the DNA model that Jim Watson and Francis Crick had constructed, based on experimental data from Rosalind Franklin. Along with Leslie Orgel and Jack Dunitz, he drove to Cambridge to see the model. He described this experience in a lecture near the end of his life:

“And I have to tell you that it was just a moment of absolute enlightenment, that’s all I can say. I had seen the light, and I spent the whole of the next day, before we went back, talking to Jim Watson … And I resolved to work on this subject and, of course, there wasn’t much I could do at that time. I started to think, as indeed we began to talk then, about the genetic code. What is this code? What does this sequence mean?” Wang Jian, founder of the genome sequencing company BGI, shows Sydney Brenner around the BGI headquarters in Shenzhen, Guangdong, China, in November 2010.Scotted400/Wikimedia Commons This was a second turning point. Francis Crick recruited Sydney to the Laboratory of Molecular Biology, or LMB, where he embarked on a series of experiments that eventually contributed to deciphering the genetic code. His discoveries proved that the code was based on triplets of base pairs, which he called codons, and he found two of the stop codons.

This led to a third turning point. Sydney shared an office at the LMB with Francis Crick, and they had long discussions about biological questions. What do you do for your next project after discovering the structure of DNA and working out the genetic code? Francis decided to focus on the human brain, and Sydney inaugurated a new model organism, Caenorhabditis elegans, a roundworm that is one millimeter long and has only 302 neurons. He wanted a species that could serve as a Rosetta stone for decoding how neurons give rise to complex behaviors. The neurons’ small size and other technical problems delayed that study until optogenetic techniques were invented, but in the meantime the worm’s genetics were the starting point for many breakthroughs in understanding how a creature develops from an embryo by following every cell in its body over time.

Sydney was famous for his wit. He received the Nobel Prize for physiology or medicine in 2002 for establishing C. elegans as a model system. At the Nobel banquet, he delivered a short after-dinner talk:

“But now I come to what I want to say. And the best way I can say it, is to tell you about a letter I’ve received. A Nobel Prize winner gets many letters. This was from a student in China. His e-mail said: ‘Dear Dr. Sydney Brenner, I wish also to win a Nobel Prize. Please tell me how to do it.’ I have been considering the reply which will say something like this: First you must choose the right place for your work with generous sponsors to support you. Cambridge and the Medical Research Council will do. Then you need to discover the right animal to work on — a worm such as C. elegans for example. Next, choose excellent colleagues who are willing to join you in the hard work you will need to do. How about John Sulston and Robert Horvitz for a starter. You must also make sure that they can find other colleagues and students. Everybody will have to work hard. Finally, and most important of all, you must select a Nobel Committee which is enlightened and appreciative and has an excellent chairman with unquestioned discernment.”

Sydney once counseled me not to retire until I had my next job lined up. This was his way of keeping active in science long into his 80s. After retiring from the LMB, he had an experimental project in Singapore sequencing the highly compact genome of the fugu, a pufferfish. He was the founding president of the Okinawa Institute of Science and Technology, a distinguished professor at the Salk Institute and a senior fellow at both the Janelia Research Campus of the Howard Hughes Medical Institute and the Crick–Jacobs Center for Theoretical and Computational Biology at the Salk Institute. Sydney had reinvented himself again, this time as a Johnny Appleseed for science. He wrote in “My Life in Science,” his autobiography: “I think my real skills are in getting things started. In fact, that’s what I enjoy most, the opening game. And I’m afraid that once it gets past that point, I get rather bored and want to do other things.” Sydney Brenner’s last lectures, delivered in Singapore in 2017, were published in book form in 2018. Courtesy of Terrence Sejnowski
Sydney gave three lectures at the Salk Institute on “Reading the Human Genome” in 2009. They were a tour-de-force, delivered without a single slide or prop. He did not need props to hold an audience spellbound. He said that no human ever had read the entire human genome, base pair by base pair — only computers. Sydney made it his goal to do just that and in so doing discovered interesting similarities between stretches of DNA in different genes and across species.

Sydney was skeptical about the rise of omics in biology. In a Science magazine editorial, “Understanding the Human Brain,” he wrote: “Like most fields in biology, neuroscience is succumbing to an ‘epidomic’ of data collecting.” At a symposium at the University of California, San Diego, on the emergence of omics, when asked which of all the omics was the most important, his immediate reply was “economics.” On another occasion he was asked about the use of pipelines for drug discovery. His comment was “High throughput: No input, no output.” Despite these comments, we should remember that he was responsible for the complete reconstruction of the C. elegans brain from electron microscopic sections in 1968, a pioneering piece of 21st century connectomics in the 20th century.

In October 2017, I served as interlocutor for four lectures Sydney gave to a small group of young researchers in Singapore, during which he reminisced about his career and the art of doing science. He stressed the importance of giving younger scientists resources to set out in new directions as he had done early in his career. The average age of researchers receiving their first National Institutes of Health grant is now 45, halfway to retirement. At the Crick-Jacobs Center at Salk, we hatched a scheme to give promising young scientists a junior fellow position directly after their Ph.D., providing them with independence and mentoring, bypassing years of postdoctoral apprenticeships. These fellows flourished and went on to brilliant careers. The Salk Institute extended the fellows program to other research areas with equal success. Sydney’s influence lives on there and at other institutions he helped launch and advise.

I visited Sydney in Singapore in January 2017 along with family and friends from all stages of his life to celebrate his 90th birthday. He was no longer able to travel, but he was well cared for by his family and Singaporean friends and was staying at the Shangri La Hotel. He was using a wheelchair, and his health was failing, but he was as lively as I ever have seen him. I asked him to tell us my favorite Sydney Brenner story, “Francisco Crick in Paradiso”:

“I shared an office with Francis Crick for twenty years in Cambridge. At one time he was interested in embryology and spent a lot of time thinking about imaginal discs in Drosophila. One day, he threw the book he was reading down onto his desk with an exasperated cry. ‘God knows how these imaginal discs work.’

In a flash I saw the whole story of Francis arriving in heaven and Peter welcoming him with ‘Oh Dr. Crick, you must be tired after your long journey. Do sit down, have a drink and relax.’

‘No,’ says Francis, ‘I must see this fellow, God; I have to ask him a question.’

After some persuasion, the angel agrees to take Francis to God. They cross the middle part of heaven, and finally right at the back, across the railway tracks, they come to a shed, with a corrugated iron roof, surrounded by junk. And in the back part, there is a little man in overalls with a large spanner in his back pocket. ‘God,’ says the angel, ‘This is Dr. Crick; Dr. Crick, this is God.’

‘I am so pleased to meet you,’ says Francis. ‘I must ask you this question. How do imaginal discs work?’

‘Well,’ comes the reply, ‘We took a little bit of this stuff and we added some things to it and … actually, we don’t know, but I can tell you that we’ve been building flies up here for 200 million years and we have had no complaints.”

Sydney Brenner died in April, joining Francis Crick in Paradiso. He had an enormous impact on science and influenced many careers. We have lost a great scientist and a good friend.

Terrence Sejnowski holds the Francis Crick chair at the Salk Institute for Biological Studies and is a distinguished professor in the division of biological sciences at the University of California, San Diego.