Dave Pagliarini’s research career had a bumpy start. By his third year of graduate school, he had followed his advisers to three labs across the Midwest and West Coast. He finished his Ph.D. in biomolecular sciences at the University of California, San Diego. Pagliarini learned a lot from each adviser, he said, and “those challenges became my accelerators.”

Those accelerators have propelled him through almost a decade of productive mitochondria research, for which Pagliarini will receive the American Society for Biochemistry and Molecular Biology’s 2020/2021 Earl and Thressa Stadtman Young Scholar Award. 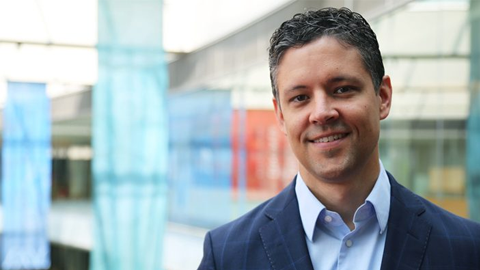 Pagliarini got into mitochondria research by chance when, as a grad student, he identified a new mitochondrial phosphatase that plays a critical role in biosynthesis of the essential cardiolipin required for optimal mitochondrial bioenergetics. This discovery led him to look for other mitochondrial proteins with unknown functions that could play a role in mitochondrial diseases.

Mitochondrial diseases affect one in every 4,000 individuals; uncharacterized mitochondrial proteins contribute to diseases such as mitochondrial encephalomyopathy, a neurodegenerative disorder for which there are no curative treatments.

During his postdoc in Vamsi Mootha’s laboratory at Harvard, Pagliarini established a compendium of more than 1,000 mitochondrial proteins by combining in-depth computational biology and biochemistry. He called it MitoCarta and published his findings in the journal Cell. Although this approach at first provided only a descriptive dataset, what set Pagliarini apart from others in his field was “his ability … to gain understanding of underlying cellular, biochemical, and physiological processes and mechanisms,” Christopher Newgard wrote in a letter supporting the award nomination.

Pagliarini is now the lead investigator and Arthur C. Nielsen chair of metabolism at the Morgridge Institute for Research. His lab works to discover additional orphan mitochondrial proteins and characterize them from molecular to organ level.

Dave PagliariniAs a postdoc, Dave Pagliarini led the development of MitoCarta, a compendium providing an extensive map of mitochondrial proteins. Since then, his lab has become known for using systematic lipidomics, proteomics and metabolomics screens to study the effects of the loss of individual mitochondrial proteins and then digging into those proteins’ biochemical activities. One example is the team’s analysis of the biosynthetic pathway that generates coenzyme Q.

Coenzyme Q, or CoQ, a lipid member of the mitochondrial electron transport chain remarkable for its redox activity, was discovered in the late 1950s just down the street from Pagliarini’s laboratory in Madison, Wisconsin. Although this unusual lipid is involved in myriad mitochondrial diseases, its biosynthesis and transport are not completely understood, which makes understanding the associated diseases difficult.

Mapping the CoQ synthesis pathway led Pagliarini’s lab to discover the functions of multiple orphan proteins. One is CoQ9, a lipid chaperone that binds to CoQ intermediates and is essential for its biosynthesis. Another is CoQ8A, an atypical kinase/ATPase essential for the assembly of the CoQ biosynthetic complex. Each of these proteins has been shown to play a role in mitochondrial diseases.