From his days poring over “1,000 Facts on Science and Technology,” one of a series of children’s books an uncle sent him, to recently starting a Ph.D. program, Jacob Crosser always has let his interests guide him.

As an undergraduate, Crosser was active in the Purdue University American Society for Biochemistry and Molecular Biology Student Chapter, first as a member and then as outreach chair and eventually as president. 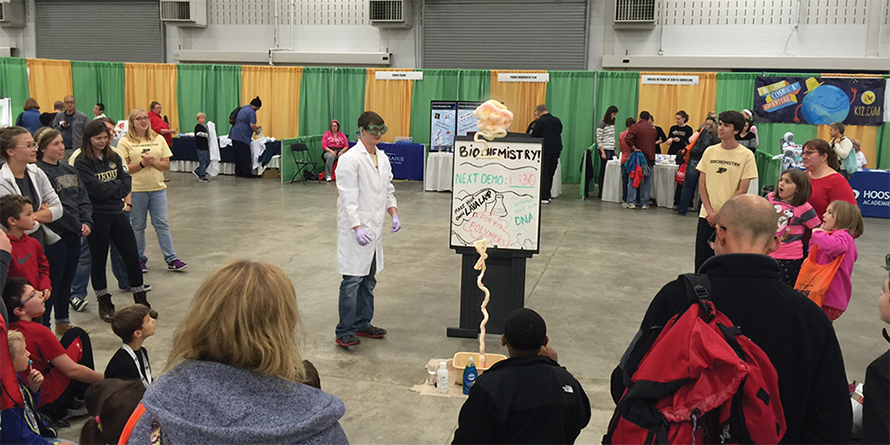 Jacob Crosser does an elephant toothpaste demonstration to introduce chemical reactions and catalysis during Celebrate Science Indiana, an outreach event, in fall 2015 at the Indiana State Fairgrounds. Courtesy of Jacob Crosser Crosser joined the chapter to get an idea of what working as a biochemistry researcher might be like; he ended up staying active because of its outreach activities. The chapter organized volunteer opportunities, including science demonstrations in local elementary school classrooms, and participated in the Purdue Spring Fest, a day when the university invites people from the surrounding community of West Lafayette, Indiana, to campus to participate in science demonstrations and experiments. Crosser, who grew up in the town, said he was inspired by these events.

“Two years ago, I had done an estimate of how many active participants came by our booth, and it was something on the order of 700 people over two days,” he said. He noticed that several children came back to the ASBMB booth year after year, looking forward to making slime out of borax and glue or whatever the science demonstration was for that year. Outreach kept Crosser involved, he said. The chapter helped him figure out what he wanted to do in his life, so he wanted to help others figure out their potential career paths by exposing them to science while they were young.

“To help someone else figure that out,” he said, “that’s a good feeling.”

The figuring out wasn’t straightforward for Crosser, who started college hoping to study engineering before he realized he wanted to solve the more complex problems that appear in biological systems. After this realization, he discovered biochemistry. That wasn’t quite the answer either, however; Crosser found he really missed doing the math problems he’d enjoyed in school when he was younger. He returned to physics and math and took an extra year to complete minors in both subjects.

Crosser now has found a niche for himself pursuing a Ph.D. in applied mathematics with a focus in computational biology at the State University of New York at Stony Brook.

“I intend to center my career around the study of the complex biological systems I’ve come to love,” he said, “through the lens of mathematics that I’ve found very natural.”