How is the cell’s interior organized? That is the question that has interested Michael Rosen at the University of Texas Southwestern Medical Center at Dallas since he started out as an independent researcher. These days, the Howard Hughes Medical Institute investigator, who trained as a chemist and chemical engineer, has been focusing on the analysis of cellular compartments that are not bound by membranes.

In 1996, I started my lab at the (Memorial) Sloan Kettering Cancer Center just a few years after Alan Hall’s lab published seminal observations reporting that the Rho family GTPases control the actin cytoskeleton. I thought that would be a great thing to start my lab in. But my interest has shifted over time from the signaling molecules to the actin cytoskeleton itself. We were studying a very important actin regulatory protein called WASP, the Wiskott-Aldrich syndrome protein. We hit on a molecular interaction that was very confusing. This was five years ago. The WASP protein has a large, disordered loop and a string of binding sites for what are called SH3 domains. It turned out that one of the important ligands of WASP has multiple SH3 domains. We started to think about what kind of complexes this kind of a system was going to make. You’ve got three SH3 domains and somewhere around nine binding sites for the SH3 domains in the WASP protein. We pretty quickly realized that was going to be a biochemical mess.

A lot of the work that we do in the lab is with (nuclear magnetic resonance spectroscopy) and (X-ray) crystallography. You can’t deal very well with mixtures in NMR and definitely not with crystallography. It was a really confusing problem for us. But it was an important one, and we needed to figure out how to solve it.

I got very lucky. I had two terrific students, Pilong Li and Hui-Chun Cheng, who went away one summer to the quantitative biology course that’s taught at Los Alamos National (Laboratory). They heard a seminar there where people were trying to use ideas from polymer chemistry to understand multivalent proteins and their multivalent ligands. It turns out it’s an old problem in the field of polymer chemistry that was solved in the early 1940s.

The polymer world has told us how molecules like these should behave, although the polymer scientists weren’t thinking about big proteins. They were thinking about making polyester for the war effort back in World War II. They figured out that polymers will phase separate. They will become like oil-and-water mixtures.

Sure enough, that is the way our system behaves. The WASP protein and its ligand, NCK, when mixed together in sufficient concentration, phase separate. You get these little droplets that float around in the aqueous solution. The connection that we made was that perhaps this could be a mechanism to organize the cytoplasm and the nucleoplasm of cells.

I have a dual (undergraduate) degree from the University of Michigan. One’s in chemistry, and one’s in chemical engineering. It’s been a slide toward biology since then. Chemistry gives me a strong quantitative footing. I want to understand biological processes in quantitative terms as much as I can. I think the engineering helps in that a lot of engineering is developing mathematical models that describe various phenomena.

How did the slide into biology happen?

I did my Ph.D. with Stuart Schreiber. I joined Stuart’s lab the year that he moved from Yale (University) to Harvard (University). Stuart was a hardcore synthetic organic chemist at Yale but always had been interested in applying chemistry to biological problems. When he moved to Harvard, he allowed his interests to manifest in his research program. I was teamed up with a postdoctoral fellow from Martin Karplus’ lab to solve the structure of the FK506 binding protein as my thesis project. A lot of the lab was doing synthetic chemistry. I was the oddball doing structural biology using NMR, the same tool as the chemists but in a different way, applying it toward the structure of a protein.

I became interested, along with a lot of people In Stuart’s lab, in signal transduction at that point. It was the rise of the signaling era right as I was finishing my Ph.D. As a postdoc, I realized that I needed to strengthen my skills and knowledge in NMR spectroscopy, and I also needed to learn biology.

I did a joint postdoc with Lewis Kay and Tony Pawson. Lewis came from Ad Bax’s lab. (Author's note: Ad Bax is well-known for his development of NMR methods and their applications to biology.) Tony discovered the SH2 domain and recognized that it bound phosphotyrosine. I was lucky to do a joint postdoctoral appointment between those two labs who were already collaborating (at the University of) Toronto.

What would you say are the big, challenging questions in cellular organization?

I certainly think membrane-independent compartmentalization is a very interesting and very important idea. How do these structures form, and what do they do? How does the mitotic spindle get together? Or the microtubule-organizing center? Or clusters of membrane receptors? There’s got to be some way of organizing these things. Why should cells go to the trouble of creating any of these other structures? It’s not clear why concentrating molecules together like that should be useful to biology.

What drew you into science?

The way you phrase that implies that there was a time when I was not interested in science! I was the kid who, at the earliest age, memorized the names of dinosaurs. I was the kid who loved running around at the beach and looking for stuff in the sand. I remember wanting to be a mathematician and have always enjoyed math. That kind of morphed sometime in high school into science and engineering.

Do you have any hobbies?

I really love science. Much of the time, if you ask me, “Hey, Mike, what are you thinking about?” it’s something to do with science. I’m not entirely one-dimensional, though. My wife and I love to cook and eat. We also like to travel a fair bit. I didn’t know early on, but you get to travel as a scientist. There are very good professional reasons to be in different places of the world. While you’re there, you meet people, taste the food, do a little bit of sightseeing. It’s a really nice side benefit. 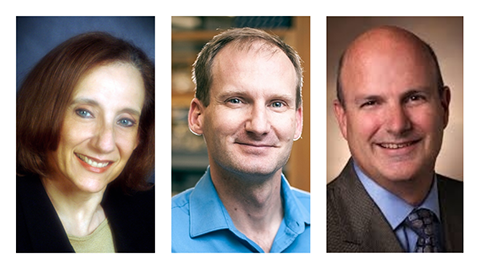