When she was a child, C. Denise Okafor was fond of science. She decided she wanted to be a doctor, because that was the only science career she knew. In her third undergraduate year, as she went from class to class to fulfill her pre-med requirements, a few teachers suggested she consider applying to the Research Experiences for Undergraduates, or REU, program. And that changed the course of her life. 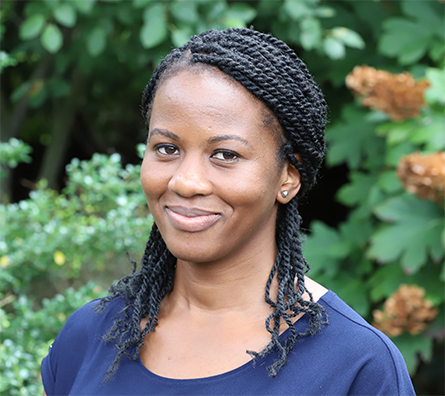 Okafor learned what scientific research meant and how it’s used to answer questions about the world we live in. Her teachers explained that she would go to a bigger research school for 10 weeks in the summer and do meaningful work on ongoing research projects.

“I didn’t know what research was,” Okafor said. “But it sounded like a great adventure.”

Now an assistant professor of biochemistry and molecular biology at Pennsylvania State University and recipient of a National Science Foundation Faculty Early Career Development, or CAREER, award, Okafor said her professors were instrumental in helping her figure out the right path to follow — first by exposing her to available opportunities and then by encouraging her to apply to graduate school.

The winding road to a Ph.D.

As an REU fellow, Okafor worked on a computational project. She enjoyed the process of learning — the process of setting up the system for simulating, modeling and then analyzing results. After this experience, she knew she wanted to do computational work during her Ph.D.

“It was almost like a challenge to myself — I think it will be fun to try, so let’s try it,” she said.

Okafor pursued graduate studies at Georgia Institute of Technology doing computational research in a supportive environment, but even after two attempts, she was unable to pass her qualifying exams. She couldn’t convince her committee that she had the potential to complete her degree.

“Graduate school was tough for me,” Okafor said. “I had a lot of doubts, lot of questions whether if this is the right path for me, can I really be successful?”

She didn’t advance to candidacy and ended up writing a master’s thesis. But supportive professors encouraged her to pursue a doctoral degree even after failing the candidacy exam, and she found a different group for her Ph.D. work.

She advises students in a similar situation to find someone to talk to, someone who is experienced but doesn’t have anything to lose or gain from the student’s decision.

“Find the mentors early, cultivate those relationships, and go to them for an outside perspective,” she said.

Okafor switched to an experimental lab, where her research was focused on the biochemistry of RNA — investigating RNA folding and function as mediated by divalent cations. 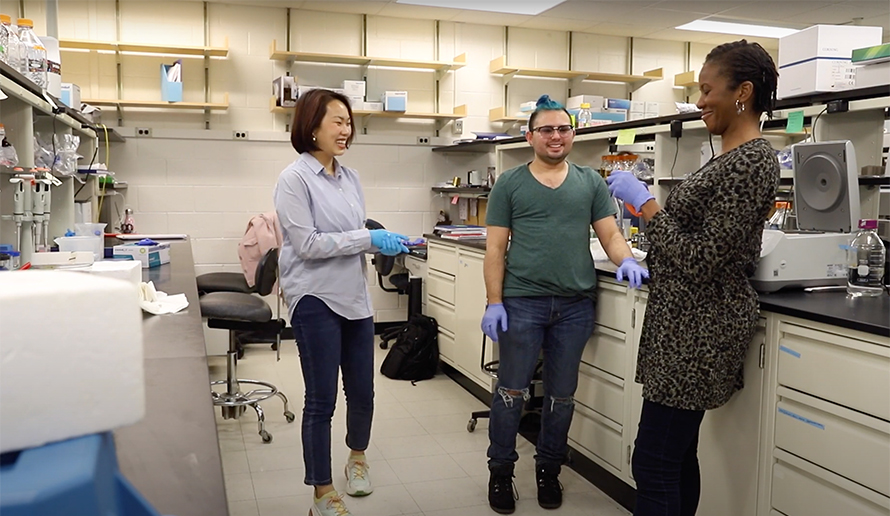 COURTESY OF DENISE OKAFOR
Denise Okafor, right, chats with two members of her lab at Penn State. The group focuses on the famesoid X receptor.

Okafor’s goal when she started her postdoctoral training was to teach at a primarily undergraduate institution. With that in mind, she applied to a teaching postdoc program funded by the National Institutes of Health called the Institutional Research and Academic Career Development Awards.

The program is a partnership among research-intensive institutions and teaching-focused institutions that provides training to postdocs from historically marginalized groups with an aim to develop both research and teaching skills through workshops and teaching assignments. As a part of the program, Okafor taught at Morehouse and Spelman colleges, two historically Black colleges in Atlanta.

She joined Eric Ortlund’s lab at Emory University, where she studied how gene expression is regulated by nuclear receptors — sensors that detect a ligand, a small binding molecule, and relay that message to DNA. While working on the project, she realized she enjoyed using molecular dynamics simulations to understand the properties of various ligands and how these ligands influence biological function.

“I saw the combination of computational and experimental investigations as an underutilized technique and wanted to jump into the unique field and pursue a research career,” Okafor said.

In 2020, Okafor started her lab at Penn State to continue research in the field of nuclear receptors, focusing on the farnesoid X receptor, or FXR. This multidomain protein has a DNA-binding domain, which allows for turning on the gene, as well as  a ligand-binding domain.

“We want to understand when a ligand binds to the ligand-binding domain how that affects the DNA-binding domain,” Okafor said. “How are their functions linked to each other? And we want to decipher the mechanisms by which those are interacting.”

The CAREER award provides five years of funding to support this project. Additionally, Okafor wants to host high school teachers in her lab over the summer so they can learn how to run a simulation of a protein, analyze it and make videos showing the protein’s trajectory that their students will be able to understand.

“I want to introduce the idea of proteins as dynamic molecules that are constantly in motion into the high school curriculum in a very accessible way,” Okafor said. “This gives them an early exposure to learning about the proteins the way they exist physiologically.”

“I’m here because I had really good mentoring and had some people advocating for me,” Okafor said. “So, I’m very passionate about doing the same for others and paying it forward.”

She advises trainees to seek peer-to-peer mentoring and form communities.

“If you don’t see a community that you want, then you should start it because chances are very high that someone else is feeling like you,” she said. “You’re just a mass email away from getting it started.”

Okafor is excited about starting a project on understanding Black women’s health. Black women face many health disparities, especially related to fertility. One example is uterine fibroids. The progesterone receptor, one of the nuclear receptors, plays an important part in fibroid pathology.

“I’m very interested in working on the progesterone receptor and applying everything we learn from our work now to alleviate the symptoms,” she said.

Ultimately, Okafor wants to apply her research on nuclear receptors to designing drugs with fewer side effects. Because these receptors are targets in diseases such as diabetes and various cancers, understanding how to design ligands that target them appropriately could have huge therapeutic impact.

“Most of the side effects are result of unintended genes being turned on,” Okafor said, and she wants to understand how drugs can be made in a selective way to drive only desired outcomes.