A scientist who seeks stories and speaks her mind

Tricia Serio is a keen student of the barriers that allow and prevent change in people and proteins. One of the country’s leading experts in the mechanisms underlying prion misfolding, Serio also has written a number of op-eds in news outlets about under-discussed issues that scientists face. Last year, she launched a project, Speak Your Story, that seeks to document subtle sexism at scientific institutions as a prelude to designing methods to change and prevent it.

Serio has published 14 articles, nine of which were op-eds, about topics such as imposter syndrome, sexism in science, work–life balance and the need to increase college graduation rates in the U.S. Her writing appeared in the Huffington Post, Nature, The Hill and the Arizona Daily Star during the 2015–2016 academic year when she was one of 20 Public Voices fellows in Tucson. 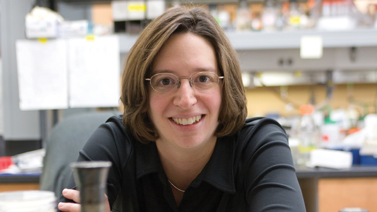 The Tucson Public Voices Fellowship, sponsored by the University of Arizona’s College of Social and Behavioral Sciences, the OpEd Project and the Women’s Foundation of Southern Arizona, has been convening and pairing fellows in Tucson with journalists as mentors since 2013.

“The Speak Your Story project really came out of my involvement in that (fellowship),” Serio said. While working on an op-ed for Nature that addressed sexism in science, she said, “I realized that many women — in fact, every woman that I asked about it — could relate stories of things that were said to her at some point in her career that she took as negative toward women or toward her particular progress in the field.”

Serio cautions that not all that negativity may have been intended. “As I’ve progressed in my career, I’ve become more open to asking people to clarify what they mean when they say something,” she said. “I realized that I was misinterpreting things that were said to me, and I think that that’s pretty common…(W)hen something’s said to you that’s disconcerting in some way, I think people hesitate to question it, especially if you’re early in your training. So I wanted to write this piece to start a conversation, essentially, about having conversations along these lines.”

Stories in a scenario

Serio’s Speak Your Story website is a place for academics to share stories about being on the receiving end of comments that they perceived as negative or about making statements that they later realized could have been misinterpreted. The submissions are made anonymously and disconnected from demographic information that’s entered with the stories. “It’s meant to be a place to share experiences,” Serio said.

Serio and her collaborators have analyzed parameters including the STEM fields, gender and academic rank of the parties involved for 750 of the more than 1,000 stories it has received from scientists at all academic levels. Some of the stories that have poured in over the past year, from both the United States and abroad, have had unexpected results.

“I was really surprised at the number of stories people put in about comments about the way they dressed, and I wasn’t anticipating that at all,” Serio said. In response to this, she engaged one of the university’s human resources staff members to help put together a workshop on implicit bias around dress, which she presented at her department’s annual retreat last year.

In the morning workshop, two groups of faculty members were asked to consider hypothetical scenarios about a female graduate student. In one of the scenario, the student had completed her qualifying exams and arrived at her oral examination wearing a short skirt and T-shirt, owing to the exceptional heat and Tucson’s casual ambiance. In response, committee members made quiet comments that the student’s attire signaled she was not taking the process seriously. The first workshop group was told to consider defending the student’s dress choices and asking the committee members whether they would have commented on a male student’s clothing choices, while the second group was told to consider informing the student that her attire was not professional.

“Because the scenarios focused on a graduate student experience, they inspired a lot of dialogue among the faculty about the different professional challenges each faced throughout their respective careers,” said Helena Rodrigues, assistant vice president of the University of Arizona’s human resources department. When the graduate students arrived that afternoon, the faculty felt motivated to engage with them about these and other questions, said Rodrigues. “I don’t know that that otherwise would have happened, and that was Tricia’s sense as well. In that regard, it had sort of an unintended positive outcome.”

Serio showed similar initiative in the Public Voices fellowship. “She became a leader in the group and definitely a kind of glue that brought everybody together,” said Teresa Puente, one of the senior facilitators with the OpEd Project.

Since the 2008 inception of the national OpEd Project, a leadership organization that seeks to accelerate the ideas and impact of underrepresented voices, the representation of women in public discourse has improved markedly. Before the OpEd Project’s launch, about 15 percent of op-eds were written by women; after nine years, preliminary data show that rate has increased to more than 25 percent. In its first three years in Tucson, the program helped 58 fellows publish more than 170 op-eds.

“The joy in working with Tricia was experiencing how astute she is, how her mind moves immediately to ‘What do the data show? Let’s get the information,” Gilliland said.

Gilliland was among the first people to see early drafts of Serio’s op-ed about subtle sexism that appeared in Nature. “[The op-ed] just kind of epitomizes her, because she’s willing to be vulnerable,” Gilliland said. “It’s very inspiring to other people, and it causes people to want to connect with her.”

Serio’s ability to connect with others ultimately became an asset to the survival of the program itself. Katie Orenstein, founder and CEO of the OpEd Project, recalled meeting Serio’s cohort on the final day of the fellowship and informing them that the program in Tucson needed a new model if it was to survive beyond the next year.

“I was really surprised and moved by what happened,” Orenstein said. “The entire room stepped up, and there were two people in the room, Tricia and Beth [Mitchneck], who kind of immediately took leadership.”

Serio and Mitchneck, another of the fellows, launched a survey to track the impact of the fellowship, created a leadership committee and helped draft a letter, along with other cohort members, to the University of Arizona’s provost. These actions ultimately helped ensure that the program could continue into the future.

“There are some people in the world, where their nature seems to be to pay it forward,” Orenstein said. “I think some people are more future-minded, and Tricia is somebody who has some really special qualities, thinking about people who come next and what’s going to be possible for them.”

Serio is now working on op-eds that follow up on the responses received through Speak Your Story and analyzing the demographic data of the participants. She believes that publicly discussing issues women face as scientists was a natural extension of conversations she was already having about her career with members of her family.

“The vast majority of my family doesn’t know what I do or why, or know anything about it, so I think I’ve been doing this for years and not realizing that I was doing it,” she said. “I think my participation in the op-ed project made me realize that that has value outside of my own family. “Talking to people who aren’t getting the inside perspective always makes me understand things at a deeper level. I think that that’s our role as scientists — to help facilitate that level of understanding.”

A first-generation college graduate, Tricia Serio grew up in Belleville, New Jersey, and attended Lehigh University in Pennsylvania. She originally planned to become a dentist before deciding to pursue molecular biology.

“Lehigh was about a little bit over an hour drive from where I grew up,” she said. “If you ask my mom, she’ll say it was very far.”

Serio’s family was, by her account, very traditional: Her father worked while her mother stayed at home. So, her academic trajectory as a molecular biologist was quite a departure.

“I don’t think my mom ever, you know, projected this path for me. She thought I would follow in her footsteps and get married and have a family and stay at home,” Serio said. Her decision to continue on to graduate school even further away from home, Serio said, came as a shock to her mother. “To be completely honest, I think that she thought it was more or less not appropriate for me as a woman to be doing that.” On the other hand, her father “had the totally opposite perspective: He thought that I could do anything that I wanted to do. He was extremely supportive, very encouraging and willing to do whatever needed to be done to support me.”

Serio enrolled in a doctoral program in molecular biophysics and biochemistry at Yale University, where she performed work on the Epstein Barr virus under George Miller. Her foray into prion folding began during her postdoctoral fellowship under the late Susan Lindquist at the University of Chicago, where she worked with prions in yeast models.

During her postdoctoral fellowship, the University of Chicago lab that her husband, the microbiologist Jeffrey Laney, had been working in moved to Yale. Serio then moved back to New Haven to wrap up her postdoctoral work before taking a professorship at Brown University in 2002. In 2012, Serio and Laney moved with their children to Tucson, where she was most recently the head of the department of molecular and cellular biology at the University of Arizona.

Serio recently took a new position as dean of the College of Natural Sciences at the University of Massachusetts, Amherst.