The University of Nebraska Medical Center researcher shares how he became a scientist, novelist and blogger

A molecular biologist by day, a writer by night. That pretty much sums up Steven Caplan, an associate professor at the University of Nebraska Medical Center. Caplan is an expert in vesicle trafficking, an editorial board member of the Journal of Biological Chemistry and an American Society for Biochemistry and Molecular Biology member. He also blogs for the U.K. newspaper The Guardian and has written two novels, “Matter over Mind” and “Welcome Home, Sir.” The novels fall into the category of “laboratory literature.” His third novel (tentatively titled “A Degree of Betrayal!”) is about a highly successful graduate student whose young Ph.D. adviser is depressed and withdrawn and makes it difficult for the student to graduate. The book is slated to be out by the end of this year. ASBMB’s science writer, Rajendrani Mukhopadhyay, spoke with Caplan to find out how he became a scientist, novelist and blogger. The interview has been edited for length and clarity. What is your research focus?

A: My research is focused on understanding the basic mechanisms by which proteins and membranes are transported from place to place within the cell, in what we call membrane trafficking or vesicular transport. We’ve been looking at a family of proteins called the C-terminal EHD proteins, which are regulatory proteins. We’ve been studying them and a variety of interaction partners that we’ve identified. One of the most recent ones is called MICAL-L1, for MICAL-like 1 protein, and we’ve been trying to understand how these proteins work together to facilitate endocytic recycling or recycling of membranes and receptors back to the plasma membrane.

How did you end up as a scientist?

A: It was a long route. I was born in the U.S., but I lived in Canada all of my childhood. I grew up in a city called Winnipeg. To make the story short, I would say I had various anti-Semitic experiences in Canada and other things. I felt like I really didn’t belong very well. I ended up moving to Israel on my own. I had an adopted family in Israel, and I lived on a kibbutz, which is an agricultural type of community. I spent the next 18 years or so (in Israel). I served in the military, and afterward I did my undergraduate, master’s and Ph.D. degrees all in Israel.

What prompted you to join the Israeli military?

A: Reading and learning about the Holocaust, combined with my exposure to neo-Nazism and anti-Semitism, were probably driving forces in my decision to move to Israel at 18. Although I am definitely not militaristic by nature, I did feel it to be my duty to serve in the army, as does every other 18-year-old in the country. In retrospect, despite loathing all three years of military service, plus the active reserve duty during my undergraduate, master’s and Ph.D. studies, I do think that the life lessons and experiences that I underwent in the military have greatly contributed to my academic success. It’s prepared me well to meet goals, take and delegate responsibility, and show teamwork and leadership. Indeed, “Welcome Home, Sir” depicts a researcher whose military service is both the source of his academic success and his personal failures in dealing with his (post traumatic stress disorder).

Why did you choose to pursue science in university?

A: I was starved for something intellectual when I finished the military. I really wanted something where I could engage my brain. I’d always loved science, in particular biomedical science. That’s what I ended up going into, a three-year program in biology.

I had a greater problem deciding what to do after my bachelor’s degree. I took a year off and backpacked through South America. During that time, I decided that I liked the biochemistry area, especially cell signaling and immunology. That’s how I ended up in a laboratory that studied T-cell receptor signaling for my Ph.D.

How do you juggle science and novel writing?

A: I don’t sleep much! I don’t watch any television. I think I am reasonably efficient at what I do, so I guess with that combination of things I get things done!

When do you do your fiction writing?

Late at night. Sometimes on weekends, if I have time. On a flight. Sitting in a coffee shop for half an hour, waiting for my daughter’s voice lesson or my son’s taekwondo lesson to end, I pull out my laptop and write. The fiction writing comes when I’m too tired to do any more scientific writing.

Do you make a distinction between your scientific and fiction writing?

A: Oh yeah, they are completely compartmentalized. They better be! Just as a funny aside, I recall having a grant and a book rejected on the same day. I couldn’t help wondering if I had the same reviewers for both!

But I do think the ideas (in fiction) of brevity and making sentences simple and easy to read have helped me put papers and grants together.

How much of your novel writing is autobiographical?

A: I’ll give you the standard author answer. When authors are writing good fiction, they are usually writing about something that matters and means something to them. In the case of “Matter over Mind,” I can confirm that I did have a parent who was bipolar. My mother was bipolar. In the book, it’s the father. My mother is no longer alive, so I don’t have a problem talking about it. I found that there are a lot of books that deal with mental illnesses and mental health issues but not from the perspective of the family. It seemed to me that the impact such a disease can have on one’s family was missing. I know (my mother’s bipolar disorder) has impacted me greatly. You asked for the reasons for my moving to Israel. I am sure that also had something to do with it.

I think what’s interesting about “Matter over Mind” is that I was a graduate student when I wrote the book. The hero of the book is an assistant professor who’s trying to get tenure (in a Canadian university). I had never been in a U.S. or Canadian university at the time I wrote the book. All of what I wrote was based on my experience with my own mentor in an Israeli university in Jerusalem. I caught up with the age and situation of the protagonist in the book when I got here to the U.S. I promised myself that I would get the book published once I got tenure. That book sat around for a good 15 years or so.

When did you start writing fiction?

A: I’d been writing short stories since I was young. I published a few along the way, not that many. I began writing short stories at a more regular pace over the course of my graduate work. When I started writing (“Matter over Mind”), it was a combination of things. I had an accident in the laboratory. I breathed in a chemical I shouldn’t have! It was iodoacetamide. I was home for 10 days with that. I finished writing several manuscripts and reviews. I was fresh of out things I could do from home. Several other things converged at the same point, such as the death of my mother. I really felt this urge to write, and the book flowed out of me. Within a week, the skeleton of the book had been written. From that point on, it was mostly editing.

Your novels fall into the laboratory literature, or lab lit, genre. What is lab lit?

A: Lab lit was defined by Jenny Rohn (at University College London), who coined the phrase. It’s basically fiction with scientists in it. It has to have a realistic component. It’s not science fiction. It’s not about having an evil scientist who is out to destroy the world or the nerdy, geeky scientist who can barely tie his own shoelaces. It’s more along the lines of what real scientists are like, what they go through, the stresses they have in their lives, their personal relationships. It’s just like what you have with fiction about lawyers, doctors, policemen and other professions. These are stories that deal with people who have science as their profession.

A: I met Jenny at an (American Society for Cell Biology) meeting in Philadelphia a couple of years ago. She said to me, “We have a group of bloggers called Occam’s Typewriter. Would you be interested perhaps in sending us a piece about something?” I thought, “I can’t do that! I’m a fiction writer, not a blogger.” But I went online, and I saw what people were writing about. So I sent in a couple of pieces. They put them up, and they asked me, “Would you like to join as a regular contributor?” I did. After a while, we got an offer from The Guardian newspaper, saying (Occam’s Typewriter) was one of the premier blogging sites, and they asked us to contribute to The Guardian articles that would be more globally relevant than the ones we write for our communities. About once a month or so, some of us send in a piece about something that we think is of importance to the scientific community.

Do you tell fellow scientists that you blog and write novels?

A: I try to. When I give seminars, I always have my last couple of slides with the covers of my books. In my CV, I list that I write novels and blogs.

Somebody wrote me a request from England to see if I could send a couple of plasmids. I responded right away, and he wrote back saying, “Are you the same one who writes for The Guardian newspaper?” It was right after I wrote (the blog post) “Science as a Ponzi scheme.” I thought that was funny. A while ago, I received another email from a high-school student in Kansas City who wrote to me to ask about the difference between basic and translational research and the importance of the two. I guess I’m starting to get recognition from people whom I don’t know who see my name out there.

Do you see your fiction writing and blogging as a form of outreach?

A: Yes, definitely. I try to reach other scientists but also people who are considering becoming scientists and let them know what the lifestyle is like as a scientist. It’s a wonderful career, despite all the pressures today with funding and everything else. It’s still a career that I would not switch with any other career. I can’t help thinking I’m extremely fortunate that I’ve been able to choose this career. 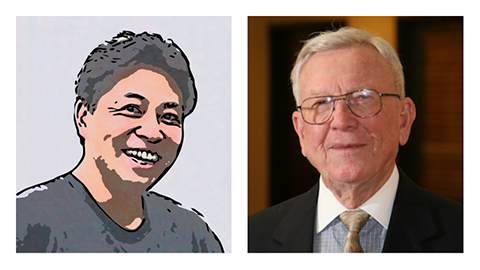