Rachel E. Klevit, professor of biochemistry at University of Washington, will give the Fritz Lipmann Lecture at the 2015 American Society for Biochemistry and Molecular Biology annual meeting. The society issues the award every two years to recognize researchers who’ve contributed conceptual advances in biochemistry, bioenergetics or molecular biology. 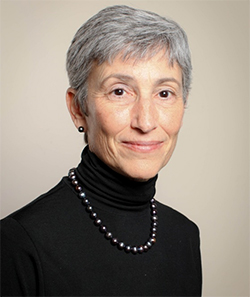 "It’s a special honor to be recognized by ASBMB with a Fritz Lipmann Award. One of my guiding principles is to apply chemical concepts and intuitions to understand biology, and this practice led Lipmann to his groundbreaking and seminal contributions. When teaching undergraduate students, I encourage them to think conceptually rather than learn by rote. The many talented students, postdoctoral fellows, collaborators and colleagues with whom I have had the pleasure to associate over the years have provided a fertile and fun environment in which to try to better understand how molecules make biology work. " — RACHEL E. KLEVIT

Klevit’s “research contributions have made a profound impact on the way we understand many very important aspects of biological chemistry,” writes Trisha N. Davis of University of Washington in her nomination letter. “Her research has been instrumental in understanding the mechanism of disease of two scourges, breast cancer and Parkinson’s. Moreover, she has changed the way research in this area is done.”

Klevit is recognized for innovatively using physical methods to determine the structure and function of proteins. Her most lauded contributions are using nuclear magnetic resonance spectroscopy to solve the structure of the Cys2-His2 zinc finger fold, a common motif present in many DNA-binding proteins, and defining the BRCA1-mediated ubiquitination system that is fundamental to the pathogenesis of breast cancer.

A defining characteristic of her approach is “a willingness to boldly push the biophysical methods to extract the most important biological insights from the system under study,” writes Lila M. Gierasch at the University of Massachusetts.

Besides her many significant scientific contributions, Klevit is known for her commitment to the scientific community and training young scientists. “Her graduate students are enthusiastic about science – they love working for her,” writes Rape. “Rachel is also most welcoming to young colleagues that have just entered her field, and she supports them heavily during their first hard years as principal investigators,” he continues. “These characteristics make Rachel one of the most cherished and important members of the ubiquitin community.”

Klevit has served on numerous study sections for the National Institutes of Health and the California Breast Cancer Program and was a member of the editorial board for the Journal of Biological Chemistry.