Structural biologists increasingly are able to determine in intricate detail the baroque structures of large protein complexes with important roles in the cell. This year, that was especially clear with the nuclear pore complex, or NPC.

A special issue of the journal Science featured five papers that tackled the NPC from various angles and in different species, in what senior editor Di Jiang called “a triumph of experimental structural biology.”

The nuclear pore complex includes four rings built from symmetrically repeated patterns of about 30 nucleoporin proteins. The complex is enormous, comprising roughly 1,000 protein subunits in total. This structure controls access to the nucleus, selectively allowing cargo such as signaling proteins and mRNAs in or out of the nucleus. It also, researchers recently have shown, can dilate and contract, changing the diameter of the central channel by almost 50%. 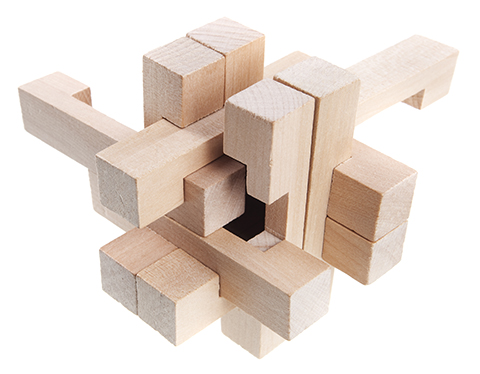 Much like working a 3D puzzle, researchers solved the structure of the nuclear pore complex by fitting the known subunit structures into a vague outline of the whole.

Building on advances in the structure of the human NPC’s core rings published in 2016, three research teams tackled the cytoplasmic face of the NPC in human, frog and yeast cells. Each combined knowledge about the structures of individual nucleoporins and small groups of proteins, determined through biochemistry, crystallography or protein structure prediction, with larger-scale but blurrier models of the NPC as a whole derived from cryo-electron microscopy or tomography. Hao Wu, a structural biologist at Harvard Medical School who led one of the research teams, compared the workflow to solving a jigsaw puzzle by fitting the smaller subunits into the larger complex’s outlines.

One of the three teams that studied the cytoplasmic face, led by Andre Hoelz at Caltech, also published a second paper investigating linker nucleoporins buried deep in the core in the nuclear envelope. The team probed the combination of flexible and tight crosslinks that allow the inner channel of the NPC to dilate but also constrain its expansion.

A fourth team, from Martin Beck’s lab at the Max Planck Institute of Biophysics, published an integrative structural analysis that took on the whole NPC. The researchers used cryo-electron tomography to develop a model of the whole complex in its constricted and dilated conformations along with structural prediction to figure out multiple possible conformations of uncharacterized scaffold nucleoporins. Like the researchers studying the cytoplasmic face of the NPC, the team then fit these subunits into a larger model — this one equipped for molecular dynamics simulations that enabled them to predict how the pore complex as a whole might move.

The work has important implications for how the cell builds one of its most complex machines and for understanding how various molecules pass in and out of the nucleus. It also has inspired researchers to use similar techniques to tackle other large complexes.

“We are now looking at other highly complex structures,” Wu said.