Survey: 1 in 5 NIH workers were sexually harassed in past year

Young, nonbinary and bisexual employees were most likely to experience harassment; about half of all respondents said they experienced “incivility"

The results of the National Institutes of Health’s Workplace Climate and Harassment Survey, released Sept. 29, show that the agency still has work to do to make its institutes and centers safe for and inclusive of its employees, trainees and contractors. 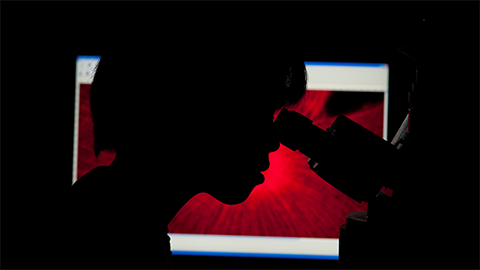 Rhoda Baer/National Institutes of Health Flickr
The NIH Workplace Climate and Harassment Survey found that workers with a disability were more likely to experience sexual harassment than those without a disability.

Young employees and those who identify as nonbinary and bisexual were more likely to report experiencing sexual harassment than other groups.

The NIH also asked the survey takers to evaluate the NIH’s performance at encouraging employees to report harassment, and 78% indicated that the agency has done “an excellent or good job” at that. 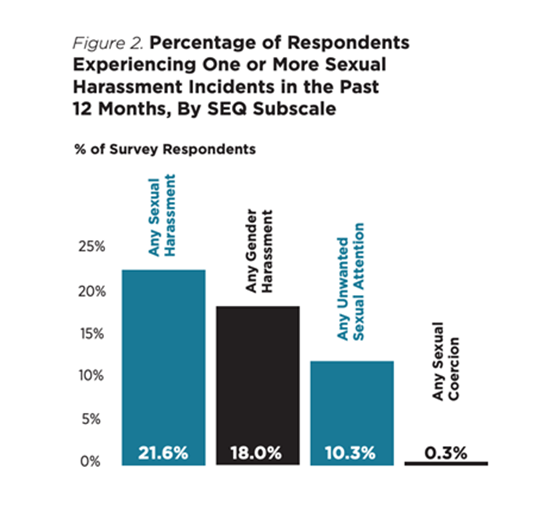 NIH Workplace Climate and Harassment Survey, 2020
The surveyors assessed participants' experiences using what is called the Sexual Experiences Questionnaire. "The SEQ items are grouped into the three categories (gender harassment, unwanted sexual attention and sexual coercion)... Since respondents could indicate multiple sexual harassment experiences in different categories in the past 12 months, the SEQ categories are not mutually exclusive," the report explained.

Still, more than half of respondents said that did not talk about being harassed with anyone, and only 14% said they had reported the harassment through a dedicated NIH channel.

When asked why they did not talk about or report sexual harassment, 64.9% said they believed their careers might suffer, and 77.6% said they didn’t think the experience was serious enough to report.

The survey report did not discuss race or ethnicity.

“The survey is an important effort to determine how people on campus feel and where more effort needs to be made. The results are alarming. You see clearly how uncomfortable the workplace can be — particularly if you are a young woman or a gender minority in science,” said Benjamin Corb, the American Society for Biochemistry and Molecular Biology’s public affairs director. “I hope that the NIH leadership responds with aggressive changes to change the culture on campus and set an example for the scientific enterprise.” 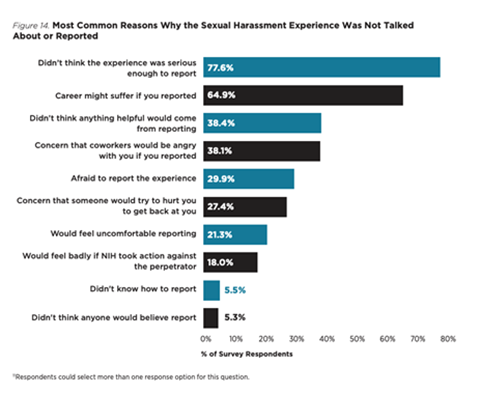 On the heels of the National Academies’ groundbreaking report on the cumulative effect of sexual harassment on women in STEM in 2018, Francis S. Collins, director of the NIH, penned several blog posts and statements (see here, here and here) about the importance of addressing the harassment in STEM. Most notably, in a September 2018 blog post, he outlined the NIH’s next steps to end sexual harassment.

“Sexual harassment is about power...It’s morally indefensible, it’s unacceptable, and it presents a major obstacle that is keeping women from achieving their rightful place in science,” he wrote.

Collins pointed readers to the NIH’s anti-sexual harassment webpage and wrote about the NIH’s plans to update its policy on harassment, making it easier for individuals to report incidents, and to launch a communication, training and education campaign.

Around the same time as Collins published his blog outlining the NIH’s steps to end sexual harassment, the NIH also began to investigate 35 sexual assault allegations within the Intramural Research Program. So far, 10 staff members have been disciplined with what the agency calls “informal disciplinary actions,” such as counseling/training and cease and desist warnings while 10 others resulted in formal actions, such as reprimands to termination of employment.

In 2019, Antonello Bonci, former scientific director of the National Institute on Drug Abuse, resigned after an investigation into whether he sexually targeted a trainee and later directed resources to another trainee with whom he had an intimate relationship.

The NIH gave the public no other information or reasoning behind Bonci’s departure.

Eight women filed equal employment opportunity complaints against between 2013 and 2019 against Constantine Stratakis, then the scientific director at the National Institute of Child Health and Human Development. Their allegations came amid concerns raised by others at the institute that Stratakis prevented women from progressing to leadership positions. Stratakis stepped down from the director position February but still runs a lab at NICHD.