Maybe you've never heard of sulfatides, sphingolipids that contain a sulfate moiety in the head group. That won't offend Xianlin Han. The genial neurochemist, a professor at the University of Texas Health Sciences Center at San Antonio, is accustomed to explaining his work to people who are unfamiliar with most of his favorite molecules. His lab studies how changes in lipids, including sulfatides, in the brain may contribute to Alzheimer's disease pathology, and over the years, his team has expanded into other projects rooted in brain lipidomics. 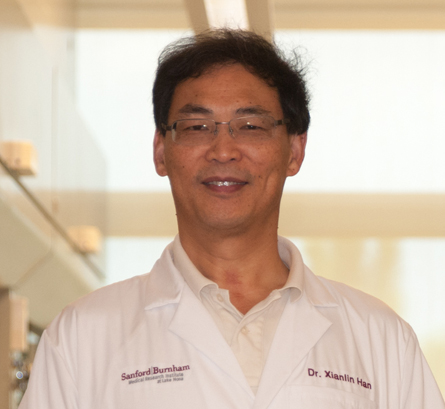 Xianlin Han
Xianlin Han in his lab space at Sanford Burnham Prebys Institute, where he was
a professor for several years before moving to Texas in 2018.

Among his many professional service activities, Han has been an associate editor for the Journal of Lipid Research since 2019. In a wide-ranging conversation with ASBMB Today, Han explained how his interest in instrumentation led him to a lifelong study of lipids and to his penchant for exploration both in his research and in his travels. This interview has been condensed and edited.

How has the pandemic affected your work life? You have a lot of collaborators in China — did you have a sense of the risks of COVID-19 very early on?

I was in Hong Kong, Guangzhou and Macau in January 2020. At that time, people over there were saying, "Something is going on in Wuhan, it seems very strange."

Then Wuhan started to lock down, and I thought, "It seems like it's not easy to get this virus totally controlled; seems like it's going to be a global problem." And gradually, it was.

I knew it would become a problem, but I didn't foresee how severe it would be here. I asked our lab manager to order PPE — at that time it was still available. On March 5, 2020, we had a JLR editorial meeting at La Jolla, in San Diego. I was the only one wearing a face mask in the entire plane. People probably thought, "He's so strange." Three weeks later, there was no PPE available anywhere, and we donated some face masks to the hospital.

Our lab actually remained open. We are in the medical center, so all the different lab heads could make their own decision. Our lab has a lot of animals that we needed to keep working on. We remained open to keep an eye on them; otherwise, we would have lost at least three years' work.

Tell me about your research.

My lab is lipidomics based; most of our projects are related to how brain lipids connect to some kind of disease. We use lipidomics to discover lipid changes, then try to identify the molecular mechanisms that contribute to the lipid changes and find the consequences of these altered lipids in context of the disease or physiological change. The three keys are discovery, identification and determining the consequences. Our whole lab's research is based in these strategies, which has a fancy name, "functional lipidomics."

We've been studying Alzheimer's disease for almost 20 years now. A long time ago, when I was at Washington University School of Medicine, we used a lipidomics platform and found that three classes of lipids changed very significantly in the earliest clinically recognizable stages of Alzheimer's disease. One kind was called the plasmalogens, the second was ceramides and the third was sulfatides.

The plasmalogen change is a reduction people had already reported and linked with oxidative stress. I thought, "That seems like it's not very novel, although it's interesting." Ceramides were linked to neuroinflammation, which was also well connected to Alzheimer's disease. So I picked the last class of lipids, sulfatides, and for the last 20 years, we have kept working on this area. Not too many people study sulfatides, so we can gradually understand many different areas. The bad thing is that not very many people are interested. Some have never heard of them.

The sulfatide reduction turned out to be very interesting. Using transgenic and knockout animal models obtained from our collaborators, we found that the mechanism is a lipid change connected with apolipoprotein E. You probably know that ApoE4 is the strongest genetic risk factor for Alzheimer's. In the early 2000s, we found that the ApoE4 particle carries a much higher content of sulfatide than other ApoE isoforms. When ApoE4 is transported, that leads to the brain having much less sulfatide. 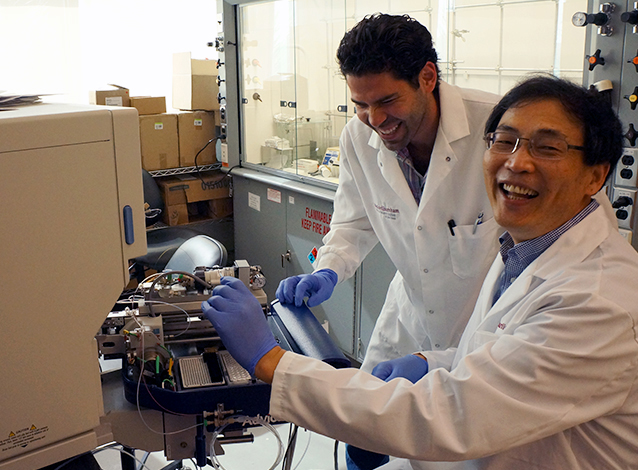 Later on, we studied the consequences. If the sulfatides are lost, what symptoms does that cause in the brain? We found that loss of sulfatide causes A-beta toxicity and hyperphosporylation of tau, the hallmarks of Alzheimer's disease.

Loss of brain sulfatides can cause other consequences: ventricular enlargement, bladder enlargement, glial cell activation, and neurotoxicity and neuroinflammation. When the conditional knockout animals are about 12 months old, we already see cognitive decline.

People are always thinking Alzheimer's is a multifactorial disease. We thought, What if many factors could cause sulfatide loss, and once the sulfatides are lost then the consequences are the different hallmarks? So that's what we study — the connection of sulfatide loss with diabetes, traumatic brain injury, anesthetic toxicity, etc.

So your trainees have a lot of projects to choose from?

Yeah, we have too many projects — too many meats on our plate. They can try whatever: pork, beef, chicken.

Now must be a good time to be an Alzheimer's researcher who doesn't study amyloid beta. Have you noticed a change in other researchers' interest in your work?

When I say we are studying lipids, most people's first reaction is to think we are trying to develop biomarkers for Alzheimer's disease. Second they think that our study is based on lipid metabolism. Everybody thinks you're working on cholesterol, because ApoE is connected to cholesterol metabolism. So usually I need to take a while to explain what we are studying.

People think that lipids are only a readout reflecting some kind of protein activity or gene expression, or maybe affecting the membrane integrity. But actually, the sulfatide appears to behave as a signaling compound. It senses the environmental changes and interacts with cell receptors. That kind of action turns out to be very important. 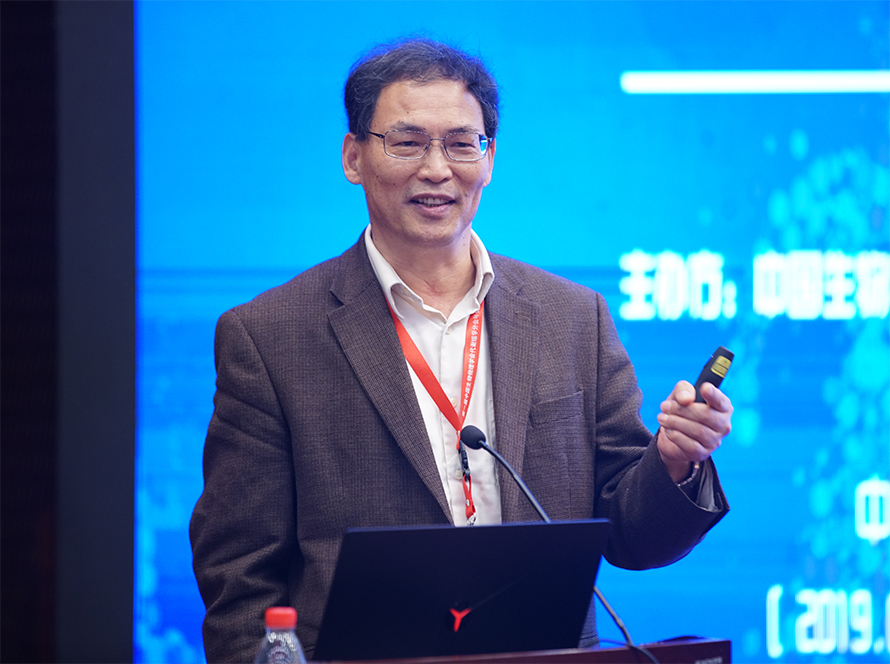 Xianlin Han
Xianlin Han presented at the International Symposium on Metabolomics in Shanghai in 2019.

That takes us back 30 years. I came to the United States in 1985 and went to Washington University to do my Ph.D. in chemistry. I really liked using instruments; my goal was to learn all kinds of instrumental technologies to study biology.

My mentor, Richard Gross, was studying the calcium-independent phospholipase A2 and chemical biology of membranes in health and disease, using a variety of techniques such as high-performance liquid chromatography, fluorescence spectroscopy and nuclear magnetic resonance. I thought that was cool. When I talked with him, he said, "Whatever you want to use we can make available." That's how I initially moved into studying lipids.

At the time, we were trying to understand how lipids travel on the membrane and interact with different regulatory proteins. How are they transported from the outer leaflet to the inner leaflet? How do they affect ion channel function?

We used HPLC to purify membrane components and to quantify lipids. I had so many headaches. I really hated all of this HPLC purification. You don't know how much time I spent late at night, doing months of work to get one data point, not knowing whether it's a good one or a bad one.

After I graduated, Dr. Gross asked me whether I would like to stay in the lab, so I stayed and became a postdoc. At this period, I had the opportunity to apply mass spectrometry to study lipids when Dr. Gross brought an electrospray ionization mass spectrometer to the lab.

Why did you move on?

I got a little bit bored after 25 years in St Louis. I was at the same university from Ph.D. to postdoc and as faculty. I thought I'd make some change. Also, in St. Louis the weather is terrible, and when I hit middle age, my joints started to get poor. I grew up in the southern area of China. So I moved south, first to Sanford Burnham Research Institute in Florida, then to the UT Health Science Center at San Antonio three years ago.

UT Health Science Center at San Antonio is relatively small compared to other centers in the UT system. But it has faculty with broad interests, from cancer to neurodegeneration to metabolic diseases. I can collaborate on all my projects in such an environment. That's why it's the right place for me.

Besides research and teaching, you also do community service. What organizations are you involved in?

I'm on the editorial board for a number of journals, mostly related to lipids. Besides lipids, I have done mass spectrometry, so I am involved in the Chinese American Society for Mass Spectrometry; I served as president for two years, and I've basically been a board member forever. I also serve as secretary for the International Lipidomics Society. Since I study the brain, I'm also involved in the neurochemistry community. 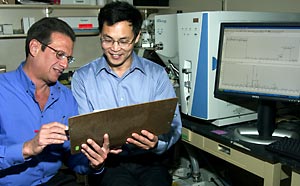 Where do you find the time?

I'm usually in the office six days a week, from 9 to 7 every day. Still, there are so many things I almost cannot finish. I agree to review so many papers because I know the editor, or I know the author or I think the research is interesting. Having a big network is good and bad. Good is that I've made lots of friends. Bad is that I always have something to do — it's so busy.

Do you have any time for hobbies?

I like hiking. San Antonio has a really good hiking system called the Greenway, which goes around the entire city. Usually my wife and I go hiking once a week, for about 10 miles. The next week we go from there to the next stop, seeing the city and exploring.

Whatever city I'm staying in, whether at home or traveling to a conference, I like to take time to walk around and see what's there.

And I like to travel. People ask, "Hey, Han, maybe you could come join our meeting and give a talk?" I say, "Sure, I'll come!" Travel not only exchanges science and advertises your work but also makes new friends. You explore areas you've never visited. That's what's so exciting. People sometimes say, "Why do you take so much time and expense to travel?" I say, "It's fun."

My third hobby is stamp collecting. I've learned a lot through stamp collecting: geography, language, cultures. I used to go fishing at stamp shows. Now I do not have time anymore; I had to hide all my albums.