The chemist who cracked DNA’s code and made the first artificial gene was born into poverty 100 years ago in an Indian village. 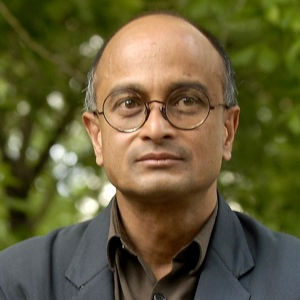 2022 marks the 100th birthday of Nobel Prize winning chemist Har Gobind Khorana — or so we think. The exact date of his birth is not known, because Khorana was born in poverty in a British Indian class that rarely recorded such dates. As a child, he had to beg a neighbor for a glowing ember so his mother could light their daily cooking fire. He was 6 before he owned his first pencil. 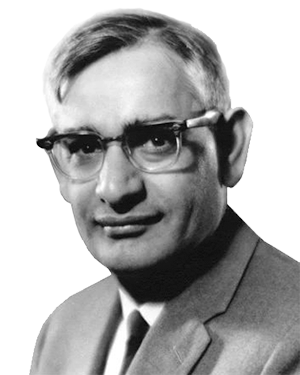 Har Gobind Khorana (1922–2011) won the Nobel Prize in Physiology or Medicine in 1968 with Robert W. Holley and Marshall W. Nirenberg "for their interpretation of the genetic code and its function in protein synthesis."

Khorana emerged from this background to receive a Nobel Prize in 1968 for deciphering the genetic code that translates DNA sequences into the protein molecules that carry out the functions of living cells.

I am writing a biography of Khorana with the hope that his story will inspire young scientists from every background to pursue their dreams of exploration and discovery.

In spite of his family’s poverty, Khorana’s father insisted on educating his children. He taught them to read and write early. The younger Khorana’s first four years of schooling took place under a tree until his father helped establish a one-room school in their village.

Khorana attended the University of Punjab, where he obtained a Masters in Chemistry in 1945. That same year, the Indian government initiated a program that sent talented students abroad for training. Khorana belonged to the first cohort and obtained a Ph.D. in organic chemistry from the University of Liverpool in 1948.

Under his scholarship’s terms, he was due to return to India. But the previous year, Khoran had met and been captivated by Esther Silber, a Swiss woman. He opted to do a postdoctoral year in Switzerland. With no funding, he lived off his meager savings to work with Vladimir Prelog, one of the world’s leading organic chemists.

Khorana also began to read widely in German-language chemistry, which led him to become curious about a family of little-known synthetic reagents called carbodiimides that help form larger organic molecules from smaller components. One of these chemicals in particular, diccyclohexylcarbodiimide or DCC, became critical in Khorana’s future work on DNA.

In 1949, Khorana returned to India alone, but his promised government job never materialized because the newly independent country was bankrupt. He managed to obtain a fellowship at the University of Cambridge in England, which was emerging as a global center of molecular biology.

The groundbreaking work happening there included the sequencing of protein molecules into their amino acid components as well as determining their structure. Francis Crick and James Watson would untangle the double helix structure of DNA there in 1953.

Khorana began using the chemical DCC to take apart and put together amino acid components of protein molecules. DCC also allowed him to put together strings of DNA, starting with their fundamental units, nucleotides.

In 1952, Khorana was offered his own laboratory at the University of British Columbia. Esther and Khorana married and moved to Vancouver.

By 1960, he had synthesized an even more complex molecule, Coenzyme A, which is involved in digestion. This success marked him as one of the most important biological chemists of his time.

Because DCC also allowed a researcher to string together DNA sequences, Khorana proposed a startlingly ambitious project — the creation of an artificial gene. Nothing of this sort had ever been attempted, and it became the Holy Grail of Khorana’s laboratory. 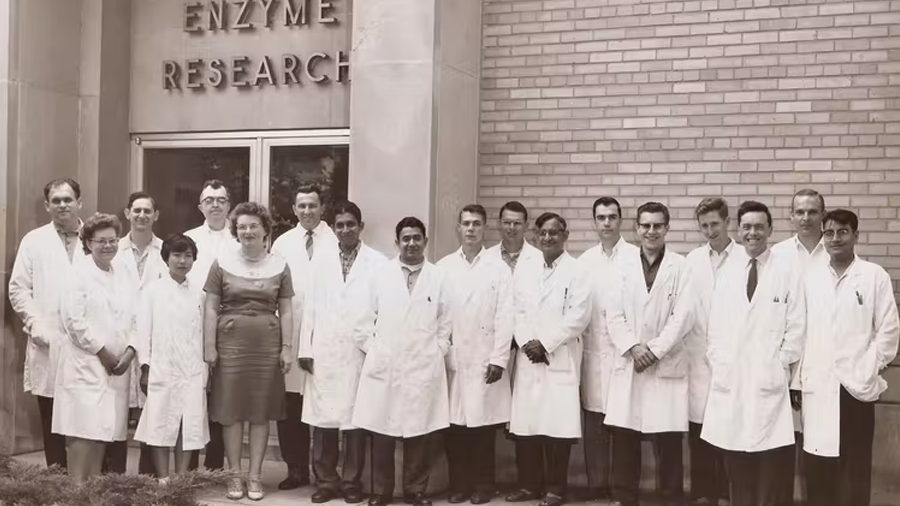 Courtesy of Matthew Jacob Thazhuthaveetil of the Indian Institute of Science at Bengaluru, CC BY-ND
Har Gobind Khorana and his laboratory at the Institute for Enzyme Research of University of Wisconsin at Madison, early 1960s.

Khorana moved to the University of Wisconsin at Madison in 1960. In 1961, biochemists Marshall Nirenberg and Heinrich Matthaei announced a way to translate DNA sequences into amino acid sequences outside a living cell. They first placed a variety of cell components in a test tube. When they then introduced short DNA sequences into the test tube, the system translated them into a sequence of amino acids that, in turn, formed part of a protein.

The effect on Khorana was electrifying. The chemical DCC allowed him to create any DNA sequence he wanted, which went beyond what Nirenberg and Matthaei could do. Inserting synthesized sequences into a test tube could produce all the amino acid sequences that DNA encodes.

Several labs were competing to do the same thing. Khorana’s worked around the clock in double shifts to solve the code first. By 1966, it was complete.

Khorana and Nirenberg were awarded the Nobel Prize in 1968 for Physiology or Medicine, which they shared with Robert Holley, who had discovered another molecule involved in protein formation. 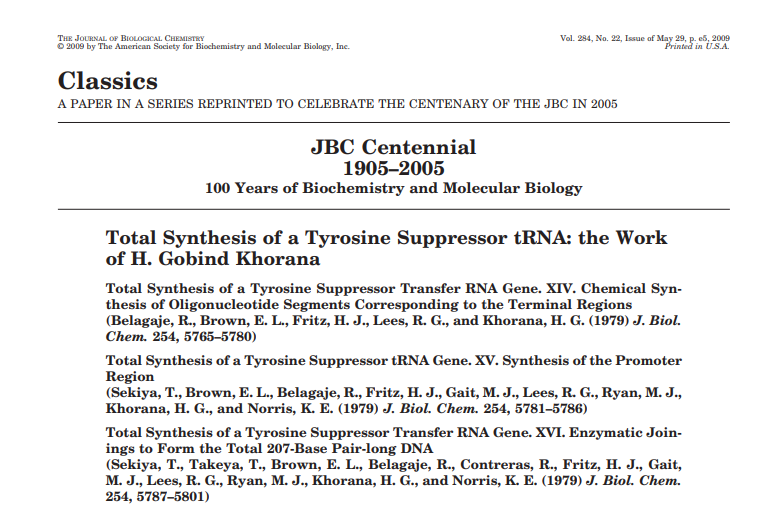 The Journal of Biological Chemistry published a "Classic" about Har Gobind Khorana in 2009. Read it here.

Solving the genetic code was a detour in Khorana’s relentless pursuit of artificial genes. In 1970, Khorana moved his laboratory to the Massachusetts Institute of Technology, where he remained for the rest of his life. In 1972, he finally completed the total synthesis of a functional gene outside a living organism. He also showed it could function appropriately in a bacterium.

In spite of his acknowledged success and prominence, racism marred Khorana’s life through much of his career. His daughter told me that, in both the U.K. and Canada, he was derided as a “Paki” by white residents. In Canada, he was paid less and expected to work more than white colleagues. She also noted, in the United States, that their mixed-race family did not dare travel together in the South.

Khorana’s legacy has also suffered from neglect that may be a result of racial bias. When author Horace Freeland Judson conducted interviews with molecular biologists for his pioneering 1979 history of molecular biology, “The Eighth Day of Creation,” he ignored Khorana — though scores of lesser white figures were interviewed and given their due. Even though Khorana and Crick were in constant contact during the years the genetic code was deciphered, Khorana gets only fleeting mention in Robert C. Olby’s biography of Crick.

But this neglect is changing, as a new generation of writers have begun to construct a more accurate and inclusive history of science.

Sahotra Sarkar is a professor in the departments of philosophy and integrative biology at the University of Texas at Austin.