Ernie Simms — a groundbreaking researcher and mentor in St. Louis

After Stephen Beverley passed the position of molecular microbiology department chair at the Washington University School of Medicine to colleague Sean Whelan in 2018, he was asked by Dean David Perlmutter to name a new endowed professorship in the department. 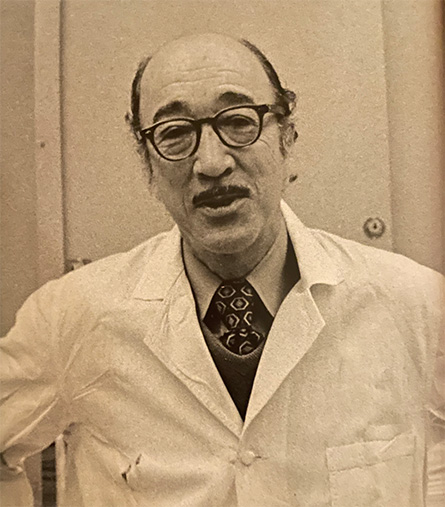 Courtesy of Marsha Simms
Ernie Simms’ daughter, Marsha, said of this photo, "The lab coat with holes
is so typical of him."

“While there were many outstanding possibilities, Ernie Simms was a clear choice,” said Beverley, citing Simms’ “outstanding science, outstanding service to the university, and recognition of a St. Louis native at a time when this was something of great societal impact.”

Simms assisted in Nobel Prize–winning research on DNA replication, but he also stood out on his own — he was the first Black man to hold a tenured academic appointment at Washington University School of Medicine. And he didn’t have a college degree.

An aptitude for leadership

Simms was born in 1917 in New Orleans, and after some time in Virginia, his family moved to St. Louis when he was 12. He attended the University of Minnesota to pursue a degree in engineering. But after his father, a college professor, died in the mid-1930s, Simms returned home to help support his family. He had completed only two years of college, and he didn’t return.

This life change brought Simms to Washington University at the age of 19 looking for work. He was hired as a laboratory technician in the surgery department but left four years later to work at the Homer G. Phillips Hospital, at the time the only public hospital for African Americans in St. Louis, as a serologist.

There he met his future wife, Virginia “Ginnie” Cayson, who worked as an office clerk across the hall from his lab. In 1942, with World War II well underway, the couple left the hospital and started working at a small arms plant in St. Louis making bullets.

Simms had established himself as an able technician during his first stint in the department, and his work spoke for itself. He got an opportunity to begin formal experimentation when Arthur Kornberg, head of the Washington University microbiology department, hired him as a research assistant in 1953.

To set the scientific stage, James Watson and Francis Crick just had identified DNA as the genetic building block essential to life. Kornberg and his group were looking for enzymes responsible for synthesizing this fascinating new molecule. They identified DNA polymerase I, the enzyme that joins small DNA fragments together to form a new DNA strand from an old template strand.

After 17 papers over six years, several of which Simms co-authored, Kornberg and Severo Ochoa were awarded the1959 Nobel Prize in physiology or medicine for this discovery. Their work laid the groundwork for what we now consider to be the fundamentals of DNA replication.

Kornberg relocated the entire microbiology department to Stanford University in the same year. Simms went to Palo Alto that summer to help Kornberg establish his lab and was asked to stay on, but he declined and returned to Washington University early in the fall.

Simms next joined the lab of Herman Eisen in the university’s dermatology division. In 1961, Eisen was made chair of the microbiology department and asked Simms to join him during the transition. Simms accepted and continued to demonstrate his aptitude for research in Eisen’s lab, making seminal contributions to the field of immunology. He co-authored several publications on antibody structure and immunochemistry. 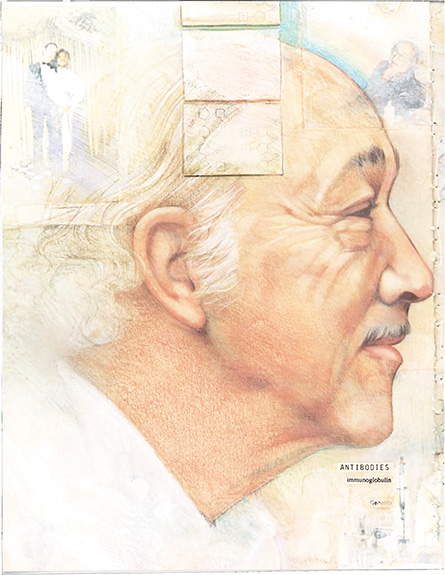 Courtesy of Stephen Beverley
This illustration accompanied a commemorative article titled “Ernie Simms: Against
the Odds,” published in the Fall 1985 issue of Outlook, a magazine published by
the Washington University School of Medicine.

Eisen promoted Simms to research assistant professor in 1968, and Simms started teaching microbiology to medical students. He was tremendously popular. Will Ross, now the associate dean for diversity and alumni endowed professor of medicine in the Division of Nephrology at Washington University School of Medicine, was in his first year of medical school in 1980 and remembers Simms as being pleasant, matter-of-fact and completely humble.

“As a caring, conscientious man, he invited me and some of the other African-American students to stop by and chat in his office,” Ross said. “In my first year I don’t recall any professor saying ‘let’s talk afterwards’ just for the sake of talking, and I remember thinking, wow, this guy really cares. I thought he would be quite busy, but he was committed to mentoring and advocating for us.”

Simms earned a reputation both for his ability as a scientist and for his success as a teacher and mentor. In recognition of his accomplishments, Eisen and others led a campaign to get Simms tenure. They contacted many of Simms’ previous and current colleagues, and the response was immediate — they received more than 100 letters in support from scientists across the globe.

In 1972, Simms’ application, including those letters, was taken before the executive faculty committee. His tenure appointment was approved unanimously. In addition to his teaching and lab work, he became involved in the medical school admissions process, where he advocated for the admission of Black students.

Simms continued to teach and do research at Washington University until his death on September 11, 1983. His contributions and legacy left their mark on the university and continue to do so. Marsha Simms, Ernie Simms’ daughter, remembers how much her father loved his job.

“He loved being there — he knew everybody, and everyone knew him, from the students to the ladies who cleaned the labs,” Marsha said. “He looked after the Black students admitted to the school, and when they graduated he was so proud, that was a really big part of his life.”

Simms’ wife, friends, colleagues and students established the Ernie Simms Scholarship Fund in 1984 to support medical students. A painting of Simms hangs in the Ernie Simms Conference Room in the molecular microbiology department at the university. In 2016, the Ernie Simms Lecture also was established to recognize his impact on research, with an annual invited speaker.

Most recently, in 2020, Stephen Beverley became the inaugural recipient of the Ernest St. John Simms distinguished professorship. Naming the professorship was “a tremendous honor and of course an important responsibility,” he said, adding, “Succinctly put, it felt awesome!”

Beverley hopes the position can be used to instill the values Simms upheld, namely those of diversity and inclusion.

“Along with the establishment of the Simms lectureship in his honor,” Beverley said, “going forward, this chair gives us a continuing platform to both recognize and continue efforts in this direction, be it in the labs, department or university.”