Her Scripps lab focuses on the roles of the actin cytoskeleton in cell architecture and physiology in organs such as muscle, blood and eyes

Velia Fowler at The Scripps Research Institute became an associate editor for the Journal of Biological Chemistry in April. Her laboratory focuses on the roles of the actin cytoskeleton in cell architecture and physiology in organs such as muscle, blood and eyes. ASBMB’s science writer, Rajendrani Mukhopadhyay, talked with Fowler to learn more about her scientific interests, career and hobbies. The interview has been edited for length and clarity. 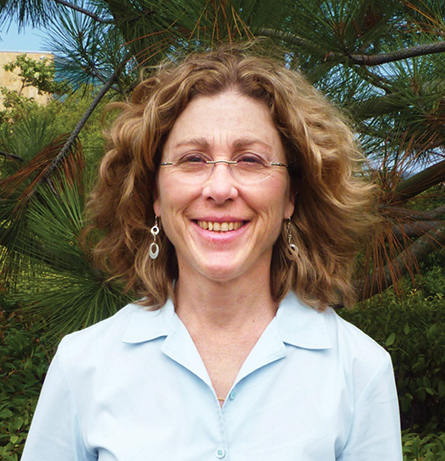 Would you briefly explain what your research group is studying and how you got interested in this particular area of research?

I started studying red blood cells as a graduate student and worked out the organization of the actin filaments at the nodes of the spectrin-actin network. I was one of the first people who showed that actin was required to create a two-dimensional network of spectrin underlying the plasma membrane. Later, in my first faculty position at Harvard Medical School, I became interested in how actin polymerization was regulated to create this really complex microarchitecture. Through that investigation, I discovered a family of proteins called tropomodulins, which regulate actin-filament length and assembly at the slow-growing end of the actin filament.

Once I started working on those proteins, they led me in many new directions. One of the first things we discovered was that tropomodulins are highly enriched in skeletal and cardiac muscle. Now I have a whole effort studying actin-length regulation and assembly in skeletal and cardiac muscle. That has taken on a life of its own. We are basically studying how the regulation of actin dynamics affects the structure of the muscle, its contractile function, development and physiology.

We’ve (also) gone back to red blood cells, where we are studying two problems. One is how actin polymerization is important for spectrin-actin network architecture and the stability of the red blood cell membrane, and the other is how erythroblasts use actin polymerization to expel their nucleus and create the organelle-free mature cell. We study the eye lens, because this family of proteins, the tropomodulins, is highly enriched in the lens fiber cells.

In all of our studies, we study the same molecular mechanisms, but the play-out in cell architecture and physiology is completely different. Our main approach is to use mouse models where we knock out these proteins or overexpress them, followed by a lot of light microscopy to analyze the locations of proteins in cells, the cytoskeletal organization and shapes of the cells, and the interactions and functions of the cells. We also do biochemistry. I wouldn’t be an associate editor for the JBC if I didn’t do biochemistry.

As a kid growing up, I really liked nature. We went hiking, or walking, in the country. We didn’t call it hiking back then. We called it walking! We took walks in the country with my dad on the weekend. We were always out in nature. I was raised to be really curious, so we were always talking about why is this and why is that and how does it work.

My dad was a professor of psychology and early-childhood education. His Ph.D. thesis was actually teaching me as a 2-year-old to read. I was two! He was very enterprising. My mother was a theater director and actress. Actors try to figure out the motivation of a character. It’s extremely analytic, dissecting. The actress has a line, but she can’t just say the line. She has to have the motivation, the consequences underlying that line, to make it believable. My mother was very analytic.

I have to say I never made a decision to do research for the rest of my life. I just took one step at a time. I’ve been doing it now for ages — it’s hard for me to believe! All the time, I constantly questioned why I was doing this and thought maybe I should just quit! It’s really a tough life. The reward is the intellectual excitement and working with other people.

I went to Oberlin College. It’s a very small liberal arts college with an extremely strong science program and lots of opportunities to do independent research. I always took a biology course. After a while, I thought, “I better major in it!” because I had so many credits of biology.

But what really got me into experimental biology was a course at Woods Hole that I took as a junior in the summer. It was called “Experimental Invertebrate Zoology.” They don’t have that course anymore, but it was an absolutely fantastic course and great experience. When you’re at Woods Hole, you go to all these lectures and you’re meeting all these graduate students who are really into (science). It’s summer camp for scientists! It was so great. That led me to apply to graduate school. I went to graduate school at the Harvard Graduate School of Arts and Sciences.

But there are so many difficulties along the way. I have to say, when I was at Oberlin, I didn’t question doing scientific research. It was great. It was such a supportive environment, very collegial, very cooperative learning. Once I got to graduate school, that was the real world, and suddenly it wasn’t like that anymore. It was very competitive. I was in a lab where I was the only woman who wasn’t a technician. My adviser would forget to introduce me at small seminars. He would introduce everyone at the table, and he would forget me. There were a lot of hoops to jump through and roadblocks. I always used to say, “They are trying to make me quit. I’m not going to let them make me quit!” I think a lot of men also had issues like these, but they were more trained into it or adapted to it.

(But) you heard about my childhood. Growing up, the atmosphere in my family was to figure out why and how did it work. The way I continue to do research is I set a direction but I am open to surprise. I’m very tuned into fundamental discoveries and basic science. I don’t consult. I don’t do anything with industry. I’m not in that direction at all. I’m more tuned into education, like trying to inspire other people to learn and discover new things and have that same joy of discovery. I love reading the scientific literature to see all the new things that are being discovered. It’s incredible. This doesn’t stop. 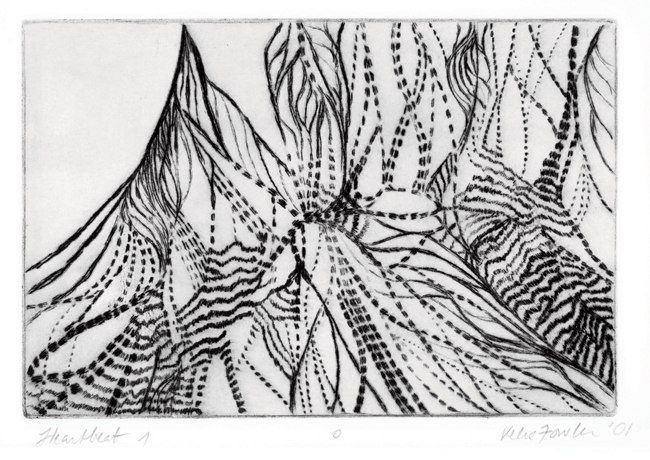 Vila Fowler
Fowler turned one of her postdoctoral fellow’s images, which made it as the cover for the Jan. 5, 2001, issue
of the JBC, into a dry point print from a zinc plate.

One of my hobbies is art. I like printmaking and have done wood blocks, etchings, dry points and colloprints. My lab does a lot of microscopy, and I’m just fascinated with these symmetrical images. Some of my art is actually taken from images of cells. It’s either an image of something in nature or an abstract image from something my lab might have taken a digital photograph of, but then I’ll make an etching that will take three months to make.

My other main hobby is gardening. I do a lot of gardening. I have a vegetable garden and a native plants garden here in southern California. It takes a lot of time. Before my kids went away, I had kids — and I spent a lot of time with them. I was working with them a lot, doing gardening and art and talking science. Guess what? They are both in science. One of them is in college, and one is in graduate school. We also did a lot of cooking together, with dinner the social point of our day, and it still is when we get together.

For scientists in training, do you have any words of wisdom?

Persistence. There are lots of difficulties, but if you really love doing it, be persistent. Also, remember that you’re not alone. I felt very much alone in many situations. I think it’s better nowadays. There are opportunities for mentoring and networking. We didn’t have any of that 30 years ago. I think it’s better now since students are encouraged to seek each other out and be part of groups with other students or faculty or postdocs. But I still think, at the end of the day, if you’re doing experiments, it’s ultimately a creative process, and that has an element of being solitary. Even though there is a lot of team science, there’s still your own mind. You’re thinking about which questions to ask and what your experiments mean, and you are alone doing that. But other people are doing it too, so remember that. It’s a difficulty that’s not insurmountable. Also, take some joy in it. It’s so much fun. If you’re not excited about what you’re doing, no one else will be, so what’s the point of that?

I also think that there is a myth of how young scientists are supposed to do things: Have these types of presentations, ask these questions, have certain interactions, publish in these journals, and follow X, Y and Z. There’s a lot of expectation and pressure. If you do something that’s not something everyone else is doing, you feel somewhat inadequate and that you’re no good. It is really important not to feel that way or figure out a way to get over it and have faith in your own goals and what you really like. It takes all kinds of scientists for science to advance.