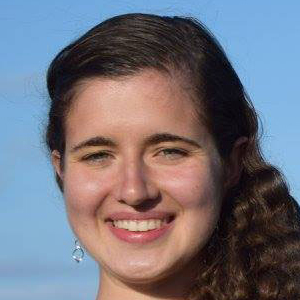 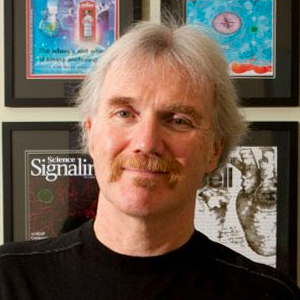 Cosmopolitan, cultured, creative and caring. These characteristics were embodied in the life of Edmond (Eddy) Fischer — Nobel laureate, musician and globetrotting scientific celebrity — who died Aug 27, age 101, in Seattle, Washington. 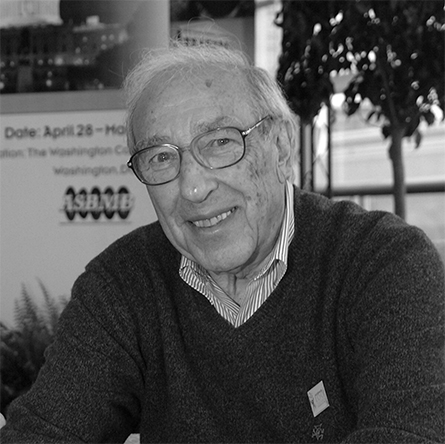 Eddy was born April 6, 1920, in the French Concession of Shanghai, son of a French mother and an Austrian father. Until the age of 7, he attended l’École Enfantine Française in Shanghai. During the summers, because Shanghai was crushingly hot and humid, his family would go to Hakone Lake in Japan via boat from Shanghai to Yokohama. Thus, from an early age, he experienced a multicultural lifestyle that shaped his perspective, relationships and science in the years to come.

In 1927, the family left for Europe, traveling by the Trans-Siberian Railway. In Switzerland, Eddy was educated at La Châtaigneraie International School, where he became fascinated with science and the emerging field of biological chemistry. His curiosity was sparked by a childhood admiration of bacteriologist Louis Pasteur and the fortuitus gift of a research-grade microscope. This scientific instrument allowed him to conduct experiments and first experience the adrenaline of discovery.

Eddy’s cosmopolitan upbringing fostered a love of history, music and art. At age 14, just after moving to Geneva to attend the Collѐge Calvin, he attended a performance of Beethoven’s Emperor Concerto by Swiss maestro Johnny Aubert, a piano professor at the prestigious Conservatoire de Musique de Genève. The next day, Eddy approached the director of the conservatory and asked to become Aubert’s student. In the ensuing audition, Eddy impressed Aubert by playing Chopin’s Polonaise in A major and Mendelssohn’s Rondo Capriccioso. Eddy studied with Aubert for 7 years, and they became good friends. From then on, Eddy regularly entertained friends and colleagues by playing the piano. 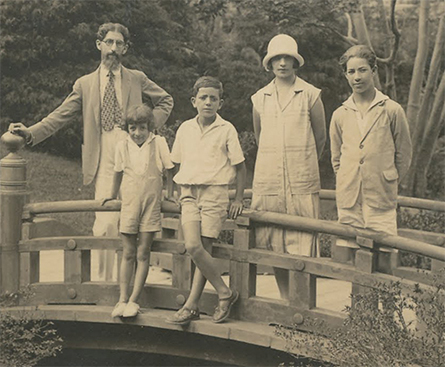 The Fischer family in Shanghai, China, in 1926. From left to right: Oscar (father),
Edmond, Georges, Renée (mother) and Raoul.

Graduating from high school weeks before the outbreak of World War II, Eddy remained in neutral Switzerland. After receiving a B.S. in organic chemistry from the University of Geneva, he earned a Ph.D. under the supervision of Kurt Meyer on the structure of polysaccharides and alpha-amylases, enzymes that catalyze hydrolysis of starch into sugars. In 1953, Eddy joined the biochemistry department at the University of Washington, where he remained an active faculty member until his death. Shortly after arriving in Seattle, Eddy teamed up with UW biochemist Edwin G. Krebs; the two embarked upon a lifelong friendship and a remarkable collaboration.

Fischer and Krebs investigated glycogen metabolism in skeletal muscle. They focused on how glycogen phosphorylase, the enzyme that catalyzes the rate-limiting step in glycogenolysis, is regulated. They knew that the phosphorylase a form was active without the addition of adenosine monophosphate, or AMP, and that the phosphorylase b form was inactive without AMP. Through a series of ingenious and occasionally serendipitous experiments, they concluded that interconversion of the phosphorylase a to the b form occurs as “a direct phosphorylation of the enzyme.” This heralded the advent of the study of protein phosphorylation as a major mode of cellular regulation. Since then, protein kinases have become the pharmaceutical industry’s most important class of drug targets to combat cancer and inflammation. Many kinase-inhibitor drugs are approved for clinical use, and hundreds more are undergoing clinical trials. Fischer and Krebs were awarded the 1992 Nobel Prize in physiology or medicine “for their discoveries concerning reversible protein phosphorylation as a biological regulatory mechanism,” the Nobel Assembly wrote. 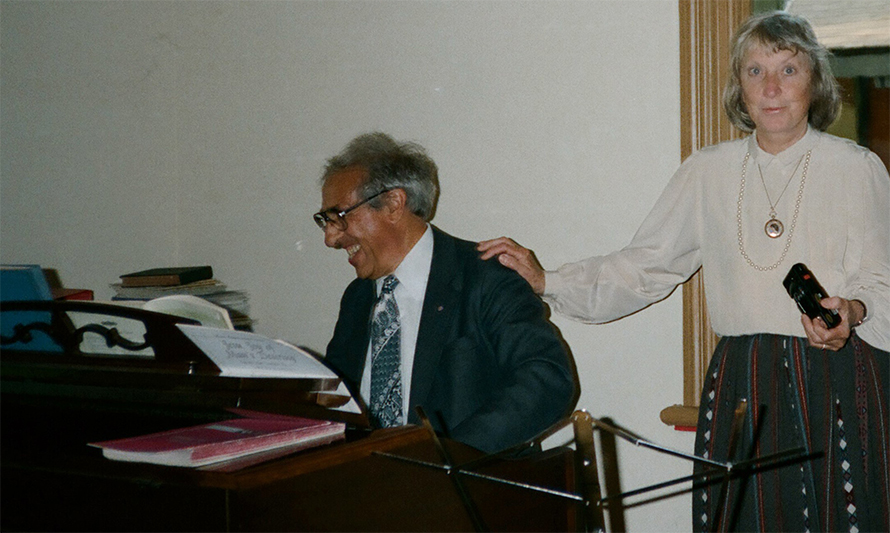 Eddy Fischer plays the piano at the wedding of his oldest son, François, in 1984.

Eddy’s scientific contributions far exceeded the discovery of protein phosphorylation. He was a wonderful mentor whose scientific lineage includes world leaders in cell signaling. In the 1970s, ’80s and ’90s, he was at the forefront of phosphatase research, the debatably more important reverse step of protein phosphorylation. Luminaries passing through his lab included Philip Cohen (University of Dundee, Scotland), who went on to classify the protein phosphatase family and define subcellular targeting as a vital signal termination mechanism; David Brautigan (University of Virginia), who discerned mechanisms of protein phosphatase 1 action; and Nicholas Tonks (Cold Spring Harbor Laboratory), who discovered protein tyrosine phosphatases, enzymes that frequently counteract oncogenes. Each trainee benefitted from creative and considerate conversations with Eddy. These precious touchpoints garnered an unparalleled loyalty and pride in being part of the Fischer (and Krebs) scientific family tree.

Eddy’s first and favorite tongue was French. His French–Swiss flamboyance often contrasted with the Midwestern sensibilities of Ed Krebs. Their linguistic interface was something to behold. In Eddy’s own words, “I remember the amused expressions of my colleagues seated in the back row of the class listening to my fractured English when lecturing the medical students. I also remember Ed Krebs’ broad smile whenever I lapsed into French. What Ed didn’t realize, though, is that within two years, while my English didn’t improve very much, his deteriorated completely!”

Publishing is at the core of scientific discovery. Working with Fischer and Krebs on manuscripts was an absolute joy but not without challenges. The scientific world knew this pair as Eddy and Ed. Yet while Fischer always addressed Krebs as Ed, Krebs invariably referred to Eddy as Ed. Most correspondence began with the greeting “Ed” and ended with the salutation “Ed” — often leaving the confused reader uncertain of whether the message was from Fischer to Krebs or from Krebs to Fischer. This befuddling banter made “Ed-iting” manuscripts a daunting prospect.

Both Eds were superb writers and confident of their own grammatical prowess. Fischer was a section editor for the journal Biochemistry, and Krebs was an associate editor for the Journal of Biological Chemistry. Hence, a first author sitting between the two during editing sessions frequently took on the mantle of a tennis umpire as scientific and grammatical points were served diplomatically across the table and courteously returned. On rare occasions, the first author would venture into the fray, offering their own syntactic suggestion, only to be rebuffed with the politeness and precision of a JBC rejection. Thus, each trainee got not only a superb scientific education but also invaluable linguistic instruction at the feet of Fischer and Krebs. As was often said, “Two h-Ed’s are better than one.” 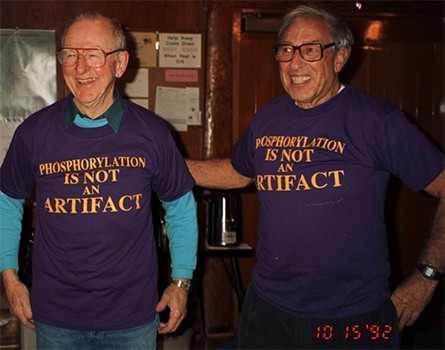 The two Eds in 1992 at the annual Fischer and Krebs lab retreat in Pack Forest, Washington. This photo was taken soon after they won the Nobel Prize.

Eddy’s dedication to science did not detract from his devotion to his family. Whether it was a family Christmas dinner or a reunion of friends, he always insisted on hosting, even though he never had enough table space or chairs. He loved to cook traditional Swiss meals, including endives au jambon, fondue and aspic, which always were drowning in fat and often devoid of vegetables. Even at the age of 101, he liked to cook for everyone.

Eddy was particularly close to his granddaughter and family protege, Élyse Fischer (an author of this Retrospective). He was proud that she attended the University of St. Andrews in Scotland. He always had valued his diverse education and upbringing and thought the experience would be good for her. As a native of Scotland, I (John Scott, an author of this Retrospective) remember being quizzed by Eddy about the benefits of a St. Andrew’s education and the value of Élyse’s proximity to the city of Dundee, the home of his protege Philip Cohen and Cohen’s wife Tricia, both of whom became important mentors to Élyse. I enthusiastically concurred.

Eddy was even more gratified when Élyse chose to study protein structure determination for her Ph.D. with David Barford at the Medical Research Council Laboratory of Molecular Biology at the University of Cambridge. Perhaps fated by genetics, Élyse succeeded in unveiling a molecular mechanism of cell cycle regulation by phosphorylation.

Eddy’s enthusiasm for science, music, friends and family never diminished. In June 2021, he participated in the 70th Lindau Nobel Laureate meeting over Zoom, inspiring young scientists and playing piano for the virtual Lindau symphonic orchestra. Less than a month before his death, he played piano at his grandson’s wedding as groom and bride walked down the aisle. 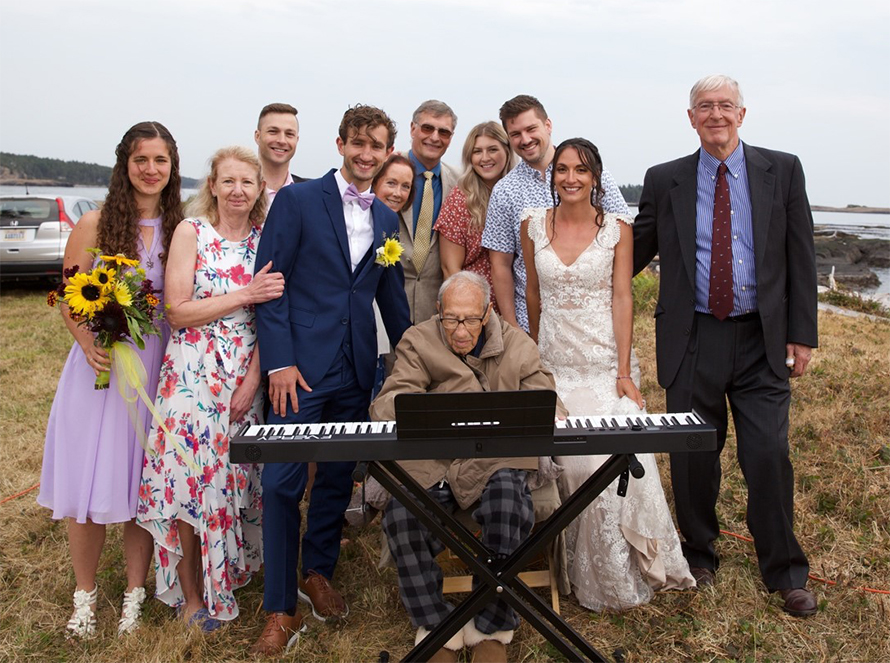 Eddy plays the piano with family at his grandson Leo’s wedding on July 31, 2021. Élyse Fischer is on the far left.

We close with Eddy’s own words: “As to what has always attracted me toward scientific research ... I believe it’s the systematic way one has to proceed in science, the kind of logic one has to apply to solve a given problem. Science builds on science, where every result obtained suggests a number of questions, and every question asked suggests the next experiment. One must follow those leads just like a detective follows different leads to solve a murder mystery, never knowing whether it will lead you to a dead end or to the next big breakthrough. Because in science, one cannot order at will a great discovery, or buy it at any cost because there is no way of predicting when and from where it will come.”

Élyse S. Fischer recently completed her Ph.D. at the University of Cambridge, studying cell cycle regulation with David Barford at the MRC Laboratory of Molecular Biology.

John D. Scott is the Edwin G. Krebs–Speights professor of cell signaling and cancer biology and chair of the pharmacology department at the University of Washington.