Building a scientific community one meme at a time 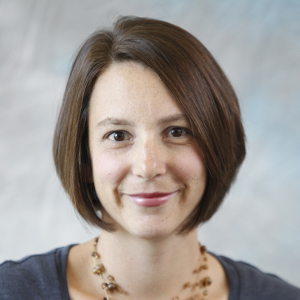 Memes snuck into my classroom in a very unassuming way just three weeks into my spring 2020 cancer biology course. At the end of a class period, in response to an informational email from me, student Tyler Snodgrass replied all,  not with a question about lab but instead with a Shrek meme, poking fun at the topic of a tumor suppressor we had just discussed. 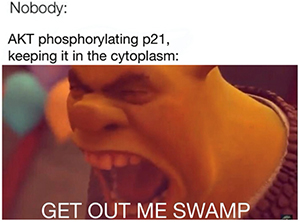 At the time, I mostly heard a lot of giggling as the students filed out of lecture, but later I learned I could use memes to get students to explain concepts. For example, student Annika Erdley later described the Shrek meme: “AKT is the molecule that phosphorylates p21, which sequesters it in the cytoplasm. Typically, p21 enters the nucleus, but AKT phosphorylates it to ‘keep it out of the swamp’ (i.e., the nucleus).”

This wasn’t a one-off event. By the end of the week, seven more emails, each with a new meme, had been added to the thread. With that, a semester-defining phenomenon had begun.

The abrupt transition to online learning in spring 2020 and the awkward blend of in-person and virtual learners in the subsequent semesters forced me to reconsider how I encourage community among my undergraduates. Student engagement with peers and faculty mentors in the classroom can build the baseline for their interactions with both scientists and nonscientists after graduation. I emphasize the idea of the classroom as a scientific community in the guidelines for scientific communication projects in my undergraduate cell and molecular biology courses, noting, “This assignment involves presenting to other scientists: your fellow classmates and myself.”

As the pandemic changed how the classroom looked and how we all interact, I had to adapt my way of engaging students in learning and communicating with their first scientific community. I’d like to say I had an epiphany for overcoming the hurdle of not being physically together, but in reality, my students handed me the best idea. Their solution was one I never would have contemplated and likely might even have dismissed — using memes. As you probably know, a meme is an amusing or interesting image (such as a captioned picture or video) that is spread widely online. That first Shrek meme led to an email thread where I encouraged (but did not require) students to share class-related images with the group.

These memes not only provided a creative outlet for students to explain scientific concepts to one another but also helped to build a much-needed community. In addition to memes related directly to content, students began creating memes about the online course experience and other difficulties, taking solace in their shared disruptions and struggles. These ranged from the stress of being a senior to the stress of the pandemic, as seen in the “red button” meme, to joking about course topics and methods that the students had difficulty mastering. For example, when Annika Erdley created and shared a SpongeBob SquarePants electromobility shift assay meme, senior Taylor Gatesman commented that it was “an accurate description of how the students view EMSA — no-one knows how to read one correctly.” In an end-of-semester survey, all the students strongly agreed that meme use helped them maintain a feeling of class community when we were physically separated from one another. 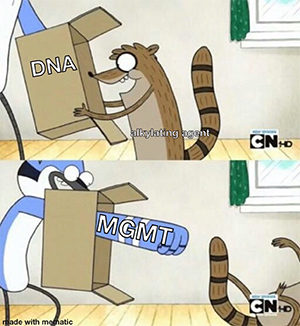 Beyond developing community and communication, this student-generated activity turned out to be a novel method for learning and reviewing content. Students felt that developing memes helped them internalize biological concepts. Using memes helped them connect to the material and make the course content more interesting and accessible. Even those less interested in creating memes themselves said that reviewing the work of others helped them study and was comparable to making diagrams or reviewing notes.

One class favorite was Natalie Horstman’s depiction of the DNA repair enzyme MGMT, which she creatively described, “If an alkylating agent tries to alkylate DNA, MGMT is able to combat the alkylation (hence the punching).” Her classmate Rachael Woessner responded: “I still laugh about it to this day, and I’m pretty sure i will always remember MGMT and DNA.”

After the spring 2020 semester, I began to consider how I could build on the momentum memes brought to my pedagogy. In my fall cell and molecular biology course I introduced bonus meme activities and contests, which helped to build rapport between the mix of in-person and virtual learners. The students from the spring course, including those who had graduated, were invited to participate as well, connecting students and recent college alumni to a broader community. The new students became comfortable in their peer group and networked with older peers.

These exercises built confidence and helped ease my undergraduates into the required communication assignments in the course, including data-focused Zoom discussions and presentations. Again students told me that creating and exploring memes provided a unique avenue to study detailed pathways or concepts. As such, I hope to keep exploring and developing the use of memes across my courses. 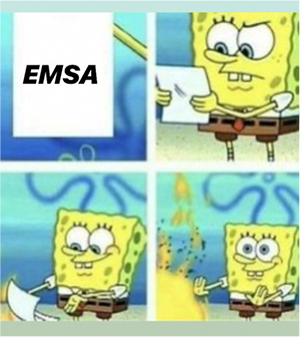 In a broader context, how does my example of stumbling upon a new pedagogical tool lead us to reimaging scientific education, community and communication? My meme experience suggests we should consider following the lead of undergraduates, the newest members of our scientific community.

Memes can help us begin to broaden our image of scientific communication and concepts, forcing us to think about the multitude of goals behind building our ability to explore science and share it with one another. Beyond that, it’s as important to consider outreach to the general public as it is to share within the scientific community.

Finally, I think using memes can push us as faculty, as well as our students, to consider approaching science as we would other social aspects of our lives. Memes help us think creatively about how to build and share our knowledge with each other and with nonscientists to help make science a topic that is relatable and not feared.