Periodic Table Day has me reflecting on years of teaching chemistry

The gray T-shirt says, in large, friendly letters, “Ah.” The letters are in a rectangle with number 104 at the top, and below them is the name of what we assume to be an element: It says, “The element of surprise.”

I don’t usually like this sort of gimmick. Number 104 already is taken by Rutherfordium, and chemistry is already exciting; it doesn't need to be dressed up.

But this shirt is special to me: It’s a goodbye present from a high school student in a class I especially enjoyed teaching. I’m wearing it as I write.

“The periodic table is your cheat sheet,” I tell new chemistry students. “You don’t need to memorize it. It is a tool for you, and I am going to teach you how to use it.”

The modern periodic table, as it happens, was made by a teacher.

Dmitri Mendeleev was doing what teachers do: We make stuff to try to help students see things anew. He had made cards, one for each element, with information about each one. After days of thinking, the story goes, he collapsed into sleep, and he had a dream in which those cards flew into an arrangement of columns and rows. His sleeping brain saw what his waking brain had been stretching to solve.

The periodic table conjured by Mendeleev had columns with elements that behave similarly. It had rows with increasing mass as you go across. And by the time we knew that these trends are explained by protons and electrons, the whole thing had found its perfect order: boxes one to 100-and-something, for the name of an atom that has 1 proton all the way up to now 118 of them. 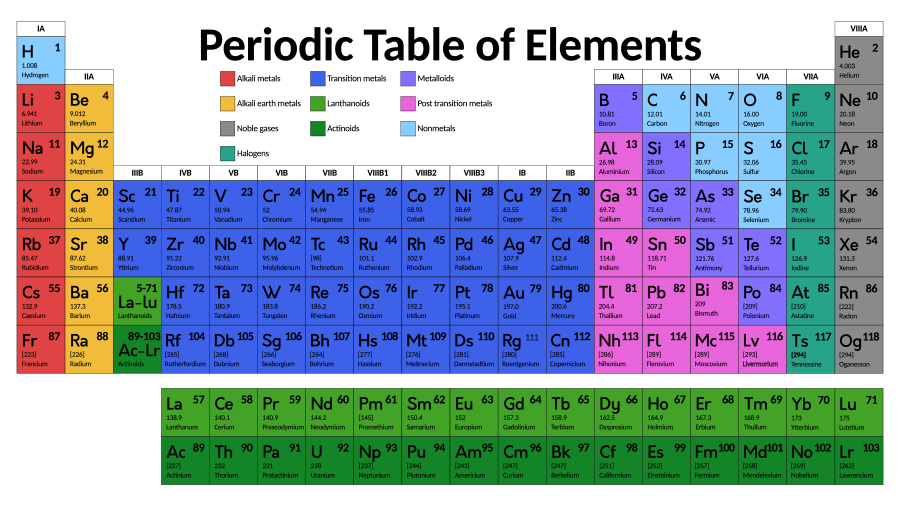 In my first year as a teacher, my mom gave me a copy of Theodore Gray’s “The Elements.”

“The periodic table is the universal catalogue of everything you can drop on your foot,” Gray writes. “There are things, such as light, love, logic, and time, that are not in the periodic table. But you cannot drop any of those things on  your foot.”

I brought it along to school, and its enthusiasm inspired my own.

“Periodic table makes learning fun and enjoyable,” one student wrote on an assignment.

“The brainwashing worked!” one of my friends said.

But you know what? It really was often fun. Here are some memories. 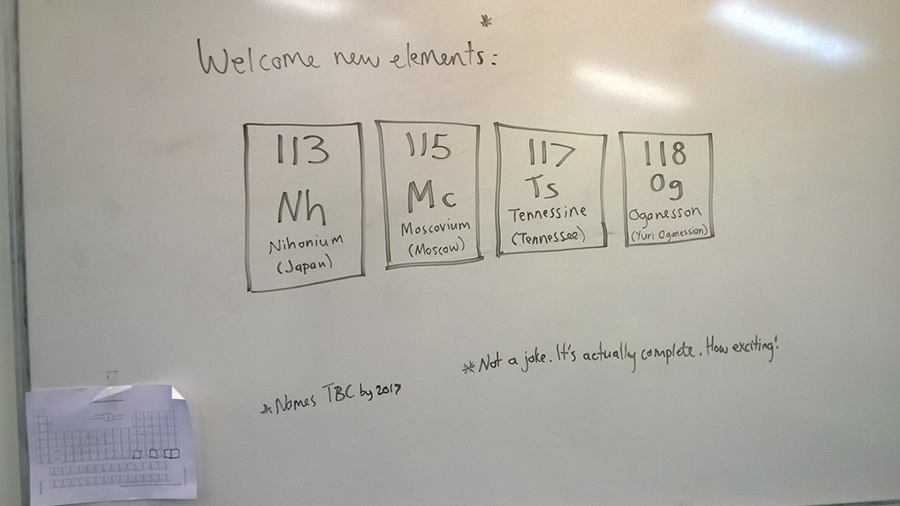 I just want to know you

The first school where I taught was one of the most multicultural schools in the entire country. Many of our students were from working-class families in an urban growth corridor.

The students wanted to be doctors, nurses, physios and ambos (physiotherapists and paramedics, in Australian speak), so with an elective called Pre-med, we took 15-year-olds on field trips to learn about health careers as varied as the elements themselves.

We did dissections. We invited biomedical Ph.D. students to come and talk with them. And we taught them the periodic table.

We got to know the characters of the periodic table and their combinations like you get to know a person: introductions, questions back and forth, and experience over time. Years into teaching, a typical lesson came to have practice, strategic explanations and questioning, and a demonstration or experiment.

You don’t introduce the six pieces of a chess board and leave it at that. No, you have to play to know chess, see how the pieces interact. Elements aren’t best learned in isolation.

“Chuckers and scoopers” was what my mentor used to say when first introducing cations and anions, referring to what they had done with electrons, until the formal vocabulary stuck.

“Cat-ions are paw-sitive,” we would write on the board, introducing formal vocabulary through the familiar.

Taylor Swift came in handy teaching a key use of the periodic table: calculating how much of something you have not in grams but in the ratio of atoms themselves!

It can do that? It can do that. (It’s called stoichiometry, and one of the ratios we talk about is known as the molar ratio.)

I once spotted a student singing it quietly during an exam. 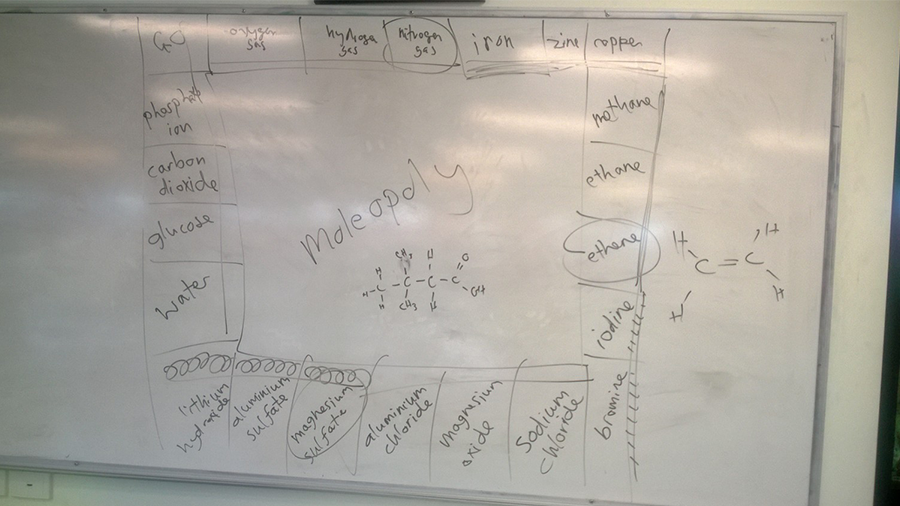 Together we learned the patterns that, as your cheat sheet, the periodic table holds.

Atoms in the same period (row) have the same number of electron shells, the tracks on which electrons may run.

I used to compare electrons to babysitting, which many of my students did in their spare time. You might have two quiet kids playing in the sandpit in front of you while a third kid with so much energy runs around the edge of the park. The kids are like electrons. The ones farther away from the middle of the atom (which is called the nucleus) have more energy.

How many electrons are running around that outermost track of interest?

There’s a cheat code for that. Atoms in the same group (column) tend to have the same number of electrons in their outer shell.

Group 1: One electron in the outer shell.

Group 8 are the aloof gases we call noble.

How many electrons fit in each shell? Literally count how many boxes there are in that row of the periodic table. It works. (Note that electrons are far crazier than this neat model suggests, but these tools are useful especially for the first few rows, which we use most often.)

And why do we care? Well, apart from the inherent beauty of those periodic patterns, you’ll be pleased to know that the escapades of high energy electrons (the scoundrels, we love them) explain a lot of everyday life.

Throw a tiny piece of a metal from Group 1 (that first column of the periodic table) into a tub of water and watch the fireworks. Ask your teacher to throw a bigger piece in. (It’s not a tough sell.) The same chemicals that give fireworks their color are right there! Snap, crackle and po … tassium! See the purple flash.

The tendency of metals to chuck electrons away is the reason they are shiny: Light bounces off their roaming, delocalized electrons.

Found amongst the rows

In my first year of teaching, my local bookshop took some of my paycheck. It was a very electronegative bookshop, I can tell you. It drew me in. (We say that some nonmetals, like oxygen, are especially electronegative. Electrons waltzing by don’t stand a chance.)

It was the kind of shop where Post-It notes of staff recommendations decorated the rows like bluebells on a hill. One Post-It, not in the science section, caught my eye. “Everyone should read this book.” I was drawn in further.

Reflecting on Periodic Table Day, it strikes me that the periodic table illustrates this concept beautifully. The elements are like us.

Elements in the same group of the periodic table — elements aligned vertically — are like a family; some are more precocious than others, but there is a family resemblance in appearance or behavior. Elements, like us, have vertical identity.

And elements in the same period — elements aligned horizontally —also can have some shared identity, with their equal number of electron shells and their softly sloping trend in atomic radii. Despite coming from different families, elements in different groups often see something in each other, and they can connect, their different backgrounds complementing one another. Our relationships are like those of the elements that make us.

There was the first exam I ever marked, when every incorrect subscript was like a separate little stab. I took hours to mark it because I dwelled on each error, sad to see it.

There were lackluster lessons and broken glasses and yellow or black inside test tubes with cracks. (Carbonates. What can I say?)

But, in all this, I wanted to invite my students to look across the rows of the periodic table and spot something just for them, something they could turn over in their hands and call their own.

I hope they saw that the periodic table is like a book: theirs for the taking, and for the joy of it. Something to get to know … and getting to know the students as they got to know the elements, differing in energy and reactivity themselves, was one of the best parts of this job.

Patterns can be broken

That school where I started teaching? It not only taught patterns but also challenged them.

Like properties of yet-unknown elements, which Mendeleev was able to predict with such accuracy, the postcode one grows up in predicts far more life outcomes than you might think. But our students were more than their postcodes, and they wanted to work hard. Trends in the periodic table can be learned and, in doing so, others can be bucked. If education is a route to opening wide options of people’s choosing, a pop test can transform a population. It is this element of teaching, together with the element of joy, that can be the most powerful.